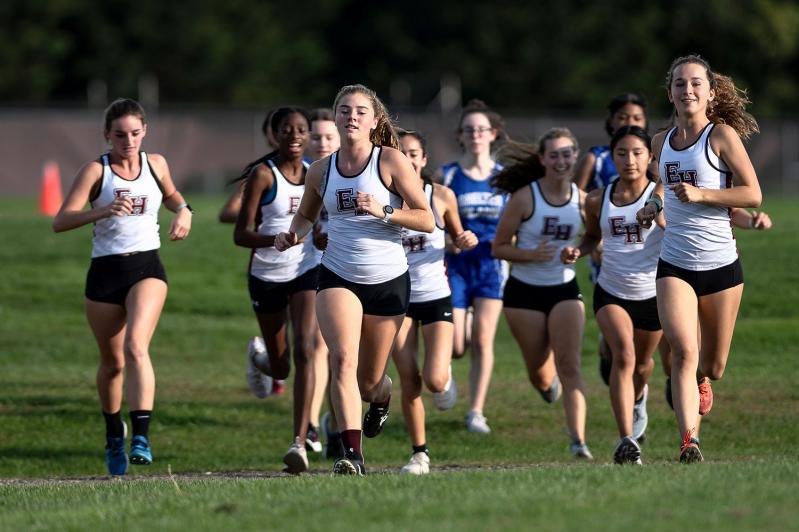 The East Hampton girls cross-country team, which faced Shelter Island over the weekend, was to have competed in the divisional cross-country championships at Sunken Meadow State Park on Tuesday.
Craig Macnaughton
By Jack Graves

“The boys are playing their best golf of the season, which is exactly what we wanted going into conference and county tournament play,” Rich King, East Hampton High’s coach, said in an email this week concerning his 10-0 team, which has gone undefeated in league play two seasons in a row now, winning most of its matches with ease.

The 18-hole conference tournament, in which teams’ and individuals’ scores were to be tallied, was to have been played Monday at the Cherry Creek Golf Links in Riverhead. The county tournament, also an 18-holer, is to be played Monday and Tuesday at the Smithtown Landing Country Club.

In addition to the golf team, the undefeated boys cross-country team, and the once-beaten girls cross-country team, several other Bonac teams were eyeing the postseason as of Monday: the girls swimming team, which bested Harborfields at the Y.M.C.A. East Hampton RECenter 94-73 last Thursday, improving its League III record to 3-1; the 12-2 girls tennis team, and — if things worked out for them this week — the boys soccer, boys and girls volleyball, and field hockey teams.

The boys soccer team, coached by Don McGovern, had to win its last regular-season game with Islip here Monday in order to make the playoffs, and field hockey, whose coach is Dana Dragone, was, at 6-6, also on the cusp. Yesterday’s game here with Pierson apparently was the determinant.

The boys volleyball team, which lost in four to Half Hollow Hills here Saturday, and which as of Monday had five matches yet to play, may make the playoffs, as may the girls, who were 6-5 going into Monday’s matchup at Rocky Point.

The winning 200 medley relay team comprised Cami Hatch, Lily Griffin, Ava Castillo, and Emily Dyner; Castillo won the 200 I.M. and the 100 butterfly; Hatch won the 50 free; Juliette Angiel, Kim Villa, Kate McMillan, and Sophie Tucci won the 200 free relay, and Griffin won the 100 breaststroke. But it was by having a number of its swimmers finish among the dozen events’ top three that put East Hampton over the top.

Craig Brierley’s squad was to have finished the league season with 0-4 West Babylon here yesterday.

The league championship meet is to be Wednesday; the county meet is slated for Nov. 6 at Stony Brook University.

The girls tennis team, coached by Kevin McConville, was to have played a home match with Patchogue-Medford Tuesday afternoon in the east bracket of the county team tournament. The winner was to have played at second-seeded Westhampton Beach the next day.

McConville said during a conversation Sunday at the Hampton Racquet club, where he is the head pro, that he was still figuring out how to beat Westhampton, which bageled East Hampton 7-0 earlier in the season.

McConville had two of the five singles players he entered in the division tournament, Maya Molin, a ninth grader, and Sandrine Becht, a senior, vying for top-eight finishes at Shoreham-Wading River High School Monday.

Molin was “the story,” he said, given that she had come back to win a first-round match with Southold’s Jessica Latham 5-7, 6-1, 6-0, and had then gone on to defeat William Floyd’s number-one (the tournament’s sixth seed) 6-1, 6-3 before losing 6-3, 6-3 to the third-seed player, Shoreham’s Catherine Erb, a senior, in the quarterfinals.

“Her dad told me she didn’t pick up tennis until fairly late . . . she’s just going to get better and better.”

As for divisional doubles, the coach said his third team, Sam Pillco and Caleigh Barletta, had defeated a Center Moriches team 6-4, 6-3 in the first round before losing 7-6, 7-6 to Sasia Musselman and Isabella Saladin, Floyd’s second team.

His second pairing, Lilly Somers and Rachel Monaco, were fifth-seeded, thus earning them a first-round bye, but lost 6-2, 6-2 to Westhampton’s Way sisters, Kylie and Anna, in the second round — the Way sisters being the Hurricanes’ second team.

“Floyd has very good doubles teams — they usually win with them and fourth singles,” said McConville, who, if given his druthers, said he would rather face Floyd than Westhampton in the county team tournament’s second round.

No matter what happened Monday, Becht and Molin have qualified to play in the county individual tournament, which begins tomorrow at Smithtown East High School.

If the field hockey team defeated Pierson yesterday, it would presumably play at a higher-seeded county tournament opponent Saturday.

The girls played with spirit versus East Islip on Oct. 13, but, because they could not finish in the circle, wound up on the short end of a 3-0 score. Each goalie — Caeleigh Schuster, an eighth grader, in East Hampton’s case — had 10 saves. When it came to penalty corner plays, East Hampton had five and East Islip four, the important difference being that the visitors made good on two of theirs.

The game ended with the Bonackers being awarded three successive corner plays in the final minute and a half, though the refs ended it after East Hampton had come up empty on the first two.