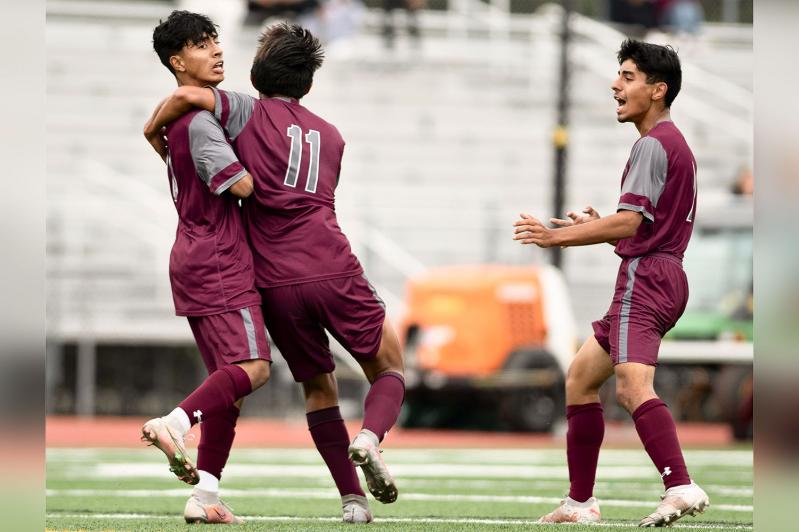 Playing as well as it has all season, the East Hampton High School boys soccer team took it to Harborfields, just as its coach, Don McGovern, had asked in the pre-game huddle Saturday, and thus avenged a loss to Harborfields in last spring’s county Class A final, and, more important, kept itself in playoff contention.

Saturday’s convincing 3-1 win improved the Bonackers’ league record to 5-5-1 with one game to go. The regular-season finale, with 3-8 Islip, was to have been played here Monday. McGovern agreed that if his charges played as well against Islip as they had against Harborfields, they would make the postseason. A loss Monday would have eliminated them.

“When we’re clicking, we’re tough to beat,” said McGovern, when asked how he thought his team might fare in the Class A playoffs if it were to make them.

Going against a steady wind, East Hampton, with Eric Armijos keying the attacks, got off on the right foot, pushing the visitors back on their heels throughout the first half. A breakaway by Armijos and John Quizhpe down the left sideline resulted in Armijos scoring in the 10th minute of play.

A minute later, it was Armijos again, after having broken through on the right side, for a 2-0 East Hampton lead.

The Tornadoes were given a chance to get one back in the 26th minute when the ball hit a defender’s hands about 15 yards out from Bonac’s goal. Facing a three-man “wall,” the kicker, Andrew Root, blasted a low right-to-left shot that, luckily for East Hampton’s keeper, Neyser Dutan, clanged off the left post. That was as close as the visitors were to come to scoring until Root floated in a 35-yard free kick in the 68th minute, by which time the game was virtually out of Harborfields’s reach.

The Bonackers came very close to making it 3-0 when, with a little more than two minutes left until the halftime break, the visitor’s goalie made a point-blank save in close that robbed Randy Pizarro of what looked like a sure score.

“Hey, 40 minutes — let’s do it,” McGovern said as his team prepared to retake the field for the second half.

Immediately, East Hampton’s players went at it again, threatening on several occasions before Armijos, after catching up to a long through pass down the right side, crossed the ball in front of the goal to Pizarro, who buried a shot high into the upper left nets.

There remained 28 minutes to play at that point, but, even though it was comfortably up 3-0, East Hampton’s team continued to play with the same intensity it had shown in the first half.

A foul call on an East Hampton defender with about 12 minutes left to play resulted in the aforementioned free kick that sailed into the upper left corner of the nets, beyond Dutan’s grasp.

the lights on Friday. Daniela Chavez scored the game-winner.

It was the fourth win of the season (vis-à-vis 10 losses) for Cara Nelson’s girls, who have enjoyed 6-0 shutouts of Amityville and Wyandanch this fall.

“We dominated possession, keeping the ball in their half for most of the match,” Nelson said in an email after Friday’s game. “We had countless chances, but couldn’t finish until Daniela scored from about 18 yards out with 12:43 left to play. . . . It was a perfect way to end the season and a thrilling end for our three seniors, Melissa Quihiri, Melanie Luque, and Melanie Valladares.”

In those wins, Skye Tanzmann had a hat trick versus Amityville, with Claire McGovern, Jocelyn Prieto, and Wyeth Zeff each scoring once, and, versus Wyandanch, McGovern (two), Prieto (two), Chavez, and Jessenia Maldonado scored.

“This is a very young team,” Nelson has said, “and, on top of that, we’ve been facing teams that have been playing soccer longer and more frequently than us. We’re very proud of the grit, determination, heart, and character these girls have shown this season. In every practice, in every game they’ve been getting stronger and stronger. It’s a team I’m proud of.”