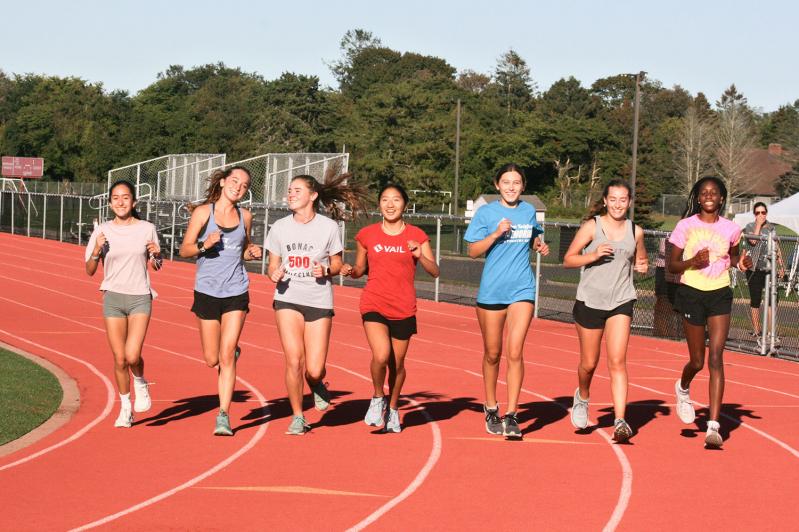 With shutout wins over their Amityville peers at Sunken Meadow State Park on Oct. 5, the East Hampton High School boys and girls cross-country teams continued undefeated, and the boys clinched their second league championship in a row. The girls, though, were to have faced a tough league opponent in Sayville Tuesday in a homecoming week showdown.

Reporting on the boys, their coach, Kevin Barry, said his charges took the first seven places in the Amityville meet, which East Hampton won by a score of 15-50. It was the 10th win in a row for the Bonackers, he said.The team was to have run against 1-3 Sayville here Tuesday and against Shelter Island, a nonleague opponent, here today. There is to be a girls race here today too.

In further cross-country news, East Hampton’s boys and girls vied in the Suffolk Officials Invitational at Sunken Meadow Saturday, with the boys tying Connetquot for first place in a 5K race contended by 26 schools. Evan Masi, Bonac’s top runner, placed eighth over all in 18 minutes and 26 seconds; Amari Gordon placed 19th in 19:00; Liam Fowkes was 31st in 19:26, and Brayan Rivera was 34th in 19:33. There were 157 finishers in all. East Hampton’s Diego Rojas, a sophomore, won the junior varsity race, topping a field of 70 in 20:32.

East Hampton’s girls swimming team improved its League III record to 2-1 and its overall record to 3-2 by winning 51-45 at Lindenhurst on Oct. 6. Craig Brierley, the team’s coach, said that Bonac took first in 11 of the 12 events.

The winners included Ashley Leon in the 200-meter freestyle, Lizzy Daniels in the 200 individual medley, Cami Hatch in the 50 and 100 free, Ava Castillo in the 100 butterfly, Izzy Caplin in the 500 free, and Ruby Tyrell in the 100 backstroke.

Brierley said the captains chose Carolina Condon, a junior, as the swimmer of the meet. “She was hoping to finish third, and she did,” Brierley said, “finding another gear with 17 lengths done and passing a Lindy swimmer in the final lap — an awesome effort and testimony to Carolina’s grit and to her determination to give her absolute best.”

The team’s homecoming meet with 2-0 Harborfields is to be at the Y.M.C.A. East Hampton RECenter this evening at 6.

On Saturday, the Harborfields boys soccer team, which edged East Hampton in last season’s county Class A final, is to play here at 12:30 p.m., the Half Hollow Hills boys volleyball team will be here at 2, and the Port Jefferson football team will be under the lights here at 7:30.