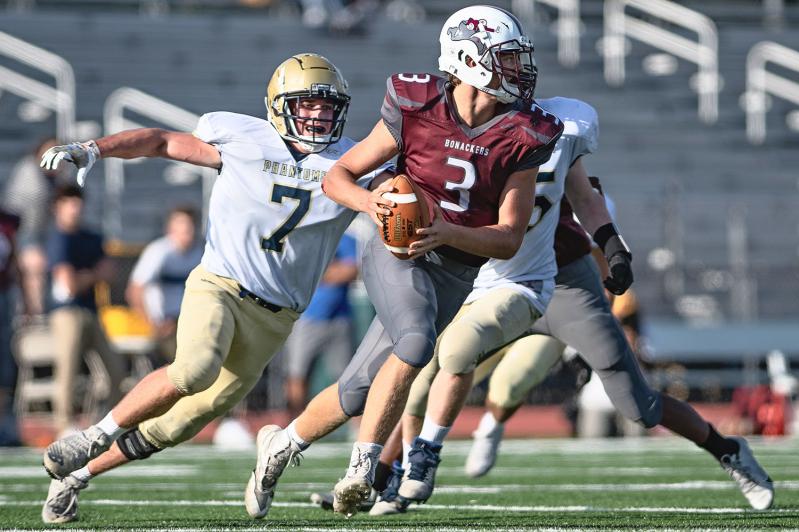 As expected, Bayport-Blue Point’s football team, which played here Friday, was a strong one, and while East Hampton could take heart in some big plays, they were too few and far between to avert a 55-13 loss.

The loss dropped the Bonackers to 2-3 in Division IV play, while the Phantoms improved to 4-1. That loss, by a score of 27-26, was to Mount Sinai, which won as the result of a field goal in the final seconds.

The visitors, who, besides the starting 11, had 24 players on the sideline, about twice East Hampton’s number, jumped out to a 21-0 lead in the first quarter, their first touchdown keyed by a 54-yard, first-down pass, after which Calvin Dickson, a senior running back, ran the ball in from 9.

Sean Aglim’s extra-point kick was good, as was to be the case whenever he was presented with an opportunity, save for the last of Bayport-Blue Point’s eight scores, when the holder took a knee.

When it came to kicking, East Hampton’s Will Darrell showed himself to be a very good punter, as he had in the game the week before with Babylon. On Friday, he got plenty of practice as East Hampton, with its O-line not quite up to the job of keeping the Phantoms’ pass rushers at bay, frequently went three-and-out.

Bayport scored on its second possession too as Jeffrey Aiello, a junior back, reeled off a 35-yard touchdown run with six minutes left in the period.

Shortly after, a bad fourth-down snap to Darrell, who fell on the ball, treated Bayport to a first-and-10 at Bonac’s 11. The visitors’ junior quarterback, Brady Clark, passed incomplete into the right corner of the end zone on first down, but kept the ball and ran to the 2 on second down, before, one play later, Aiello carried the ball in with 2:23 left on the clock.

Finally, with a half-minute left in the period, East Hampton fans had a chance to cheer as Marcus Krotman, a scrappy defender, recovered a Bayport punt-return fumble at the visitors’ 33. Charlie Corwin, the Bonackers’ impressive sophomore quarterback, hit Aryan Chugh with a touchdown pass on the very next play, a strike that struck up the band.

Chugh’s extra-point kick was blocked, but no matter, the Bonackers were on the scoreboard.

When play resumed in the second quarter, the Phantoms, on the receiving end of the kickoff, wasted no time. Jameson Smith, a senior wide receiver and defensive back, caught a pass up the middle and ran with it down to East Hampton’s 16-yard line, after which, on first down, Clark rushed for the visitors’ fourth score of the day.

Soon after, a third-down interception by Dickson put the ball in Bayport-Blue Point’s hands again, at East Hampton’s 35, and on the next play Clark threw a TD pass that upped his team’s lead to 34-6. A moment or two later, it was, thanks to another splitting of the uprights by Aglim, 35-6.

The ensuing kickoff sailed out of bounds at East Hampton’s 30, and as one of the refs was stepping off the consequent 5-yard penalty, Lorenzo Rodriguez, the offensive coordinator, having gathered everyone around him, tried his best to light a fire under East Hampton’s players, saying in parting, “It’s a football game! Let’s go!”

That talking-to seemed to take, for the Bonackers began, for the first time that afternoon, to move the ball. With a third-and-five at the 40, Corwin carried for a first down at Bayport’s 47. One play later, he ran for what appeared to be another first down, but a personal foul assessed one of his teammates annulled the big gain. With second-and-long, Corwin went deep for Chugh, but it was Smith of the opposing team who caught it at Bayport’s 16.

Gavin Locascio, a senior running back, fought his way through would-be tacklers for a 44-yard gain on Bayport-Blue Point’s first down, and a moment later duplicated that effort, though a flag brought the ball back. No matter, Clark hit Smith with a touchdown pass on the next play, and, with Aglim’s extra-point kick added, it was 42-6.

Two more exciting keepers by Corwin were yet to come, but, facing a fourth-and-6 at the Bayport 27, he was intercepted once again by Dickson just before the halftime break.

East Hampton forced the visitors to punt for the first time in the game when the third quarter began, and Darrell recovered a fumble not long afterward, at East Hampton’s 35, but he and his teammates could, as was generally the case that day, make no headway.

There remained, however, one more reason to cheer when Corwin and Danny Lester, with a little more than 10 minutes left to play, combined on a 68-yard catch-and-run, to which Chugh, with his kick, tacked on another point.

Joe McKee, East Hampton’s head coach, said as the team was about to march off the field two by two that this Saturday night’s homecoming game with Port Jefferson — which will come in at 3-2 — would be their first in three years, presumptively motivation enough to play their best.

Port Jeff’s quarterback, Luke Filippi, was one of the “Gridiron Greats” in Sunday’s Newsday for having rushed for four touchdowns and having passed for one in the Royals’ 34-18 win Saturday over Elwood-John Glenn. He also blocked a punt.