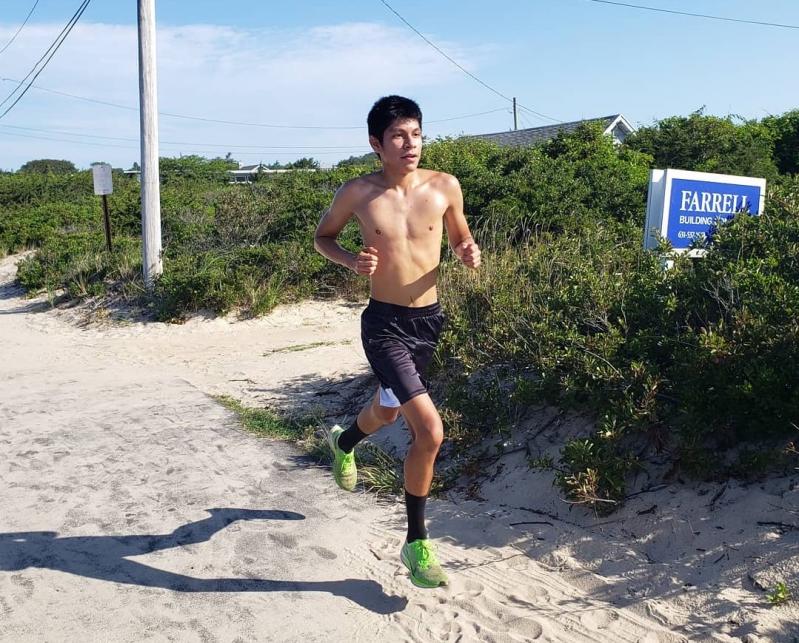 Since this year's I-Tri TurboTri 2.0 was held virtually, completing the race was flexible, as competitors could race anytime, anywhere they chose. To take advantage of the extra cross-training opportunity that otherwise might not have worked with preseason scheduling, Kevin Barry entered a few athletes from his East Hampton High School boys cross-country team.

It was the right time and right place for them to compete, and three of the boys took the top three spots in the youth division. Liam Fowkes, Brayan Rivera, and Colin Schaefer completed the 300-yard swim, 7-mile bike ride, and 1.5-mile run in 46:23, 46:33, and 47:23, respectively.

"The kids found out a lot about themselves and learned to challenge themselves," Barry said. "They've never done anything on a bike besides going to school or bike single file, stopping at a stop sign. What a sensation for them to jump off the bike and start running."

"East Hampton kids are really good swimmers," he said, yet lack practice in open-water swimming in a straight line. One of the boys was swimming "really fast, but he was swimming out to Portugal!"

The coach commended Rivera as the fastest runner, with approximately a five-minute-mile pace. Barry completed the race with the three boys, adding that they were "very careful about getting close to each other" for social distancing reasons.

"Kudos to everyone at I-Tri to open it up to them," he said regarding the free entry for first-time competitors. "It was fun. We might get to do it again next week to incorporate the cross-training more."

Nearly 50 people competed in the virtual triathlon or the duathlon version. Vasilis Xikis of Bay Shore, 36, was the top male finisher in 36:20. Lisa Valentine of Huntington, 55, was the top female finisher, coming in second over all in 38:29.

Bill Conway of East Hampton, 67, finished in fifth place over all and third in the men's category with a time of 44:42. Full race results can be found online at bit.ly/3iZbpgx.