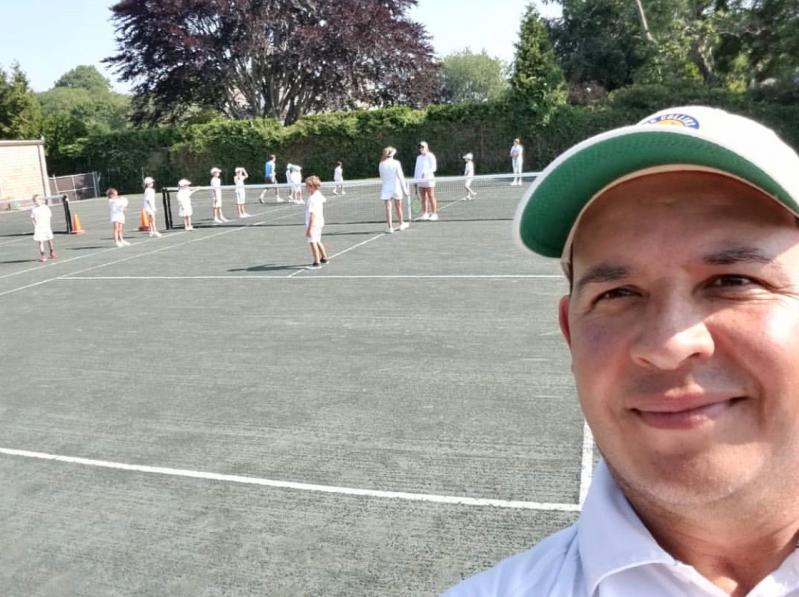 Eddy Quiroz, a native of Puebla, Mexico’s fourth-largest city, has been obsessed with sports from an early age. Soccer, golf, tennis, platform tennis, bowling, boxing, taekwondo, and rowing are among those at which he’s become adept.

He was living in Los Angeles, to which he’d moved in 2002, and was tending bar at the Calabasas Country Club there in 2006, he said during a recent conversation at The Star, when some of the members took him out golfing.

“Yes, I took to it right away, but I was so bad the first time that I went and sat at the range behind the pro for three months just watching him. I set up a practice area at home, with mirrors, and watched my swing.”

“The second time I played, I broke 100 — I was hooked. Then I just started playing a lot. In three years, I was a 2-handicap, shooting 72, 74.” Though having played on a couple of Golden State tour events for aspiring young players, he learned that his 76s and 78s would not translate into a touring pro career.

He and his East Hampton-born wife, Susan Kane, whom he’d met in L.A., moved here in June of 2013, he said, to help care for her maternal grandmother, a member of the Filer family, who was recovering from an operation, and stayed.

“I love East Hampton,” he said. “It’s very similar to Puebla when it comes to the weather. Puebla doesn’t have snow, but it has all four seasons.”

Once here, he began caddying at the Maidstone Club, assisting the caddie master, Kevin Somers, “a great player who has a nice swing and can teach, a good overall player. He’s been many years there. Then I stopped because I was moved to tennis, on the grass courts, working with the kids. I love working with kids.”

In Puebla, he continued, he had played soccer, tennis, and had bowled. He had done taekwondo and boxing too. Anything he could try.

Soccer had largely been his life in Puebla. “It teaches great discipline — you play individually, but you’re also a part of the team. You need to know your role and how to best support your team. It’s the best of both worlds. You have to be very smart and strategical. The best player on a team is the one who gives the spotlight to others.”

Out of high school, he tried out for Toros Neza, a Mexico City semipro team, and was invited to stay, but a severe ankle injury put the kibosh on that. He hasn’t played the game here, focusing rather on golf and tennis.

As for bowling, his youngest brother had once said, “ ‘I know in what sport I can beat you — bowling.’ I had never bowled, he was in a league. He rolled 180-something, I rolled 130. I was upset — not upset that he beat me, but because I couldn’t get the ball to do what I wanted it to.”

He went to the alley and studied. “Three months later, I qualified for the nationals with a 191 average. After three years, I was bowling 220s regularly,” he said.

He had studied, and he had learned, “about the balls, about oiling patterns, different grips, releases of the ball. . . . It’s in my brain, I don’t know why. If I start playing something I have to keep going until I’m decent enough to compete.”

As for tennis, he loved working with kids, as he had said. “I like working with them because when you teach them something, like how to move their hand on the grip, they see how the shot goes and that gets them excited. I like to tweak things and make it fun.”

There were some really good junior players at Maidstone whom he’d enjoyed working with.

With a full-time property-managing job looming, he’ll no longer caddie or teach tennis at the club, though, for the moment, he remains as its platform (paddle) tennis pro.

“It’s phenomenal,” Quiroz said with his habitual enthusiasm. “Anybody can play it and anybody can get to be good at it. Keep the ball up and play it deep. It’s a game about patience — you cannot be too aggressive. With tennis you hit hard down the line, say, and that’s the point. With paddle, the ball comes back, so you have to be patient.”

Yes, golf was the same, patience being required. It was “good to take it easy, to know your game, and to know your capabilities.”

He has skated at the Buckskill Winter Club, “twice with my daughters, Zianya — it’s an old Aztec name — who’s 10, and with Maya, who is 8. They’re both learning some golf and tennis. Zianya is very good, she sank a 20-footer the other day — she has natural skills. Maya has the toughness — she tries and tries and tries. They’re both good athletes.”

Yes, it was true, Quiroz agreed, that hard work could beat talent that didn’t work hard.

He had never skied, the 44-year-old interviewee said in answer to a question. It would take too much time, he said. Plus, he would have to get good at it if he tried it.