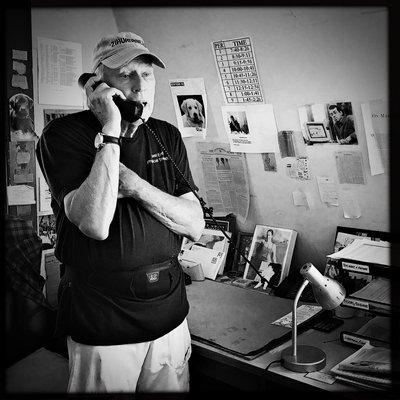 Your friendly neighborhood sportswriter at work at the Star office.
Craig Macnaughton
By Jack Graves

All of a sudden, it seems everything is off-limits. It’s hard to distance oneself socially if socializing within six feet is one’s job and has been for the past half-century.

With no high school sports for three weeks — and who knows for however long after that — I am at loose ends.

Mary and our eldest daughter, Emily, have offered buoying suggestions as to how I can fill out the pages in the coming weeks, such as asking young athletes what they’re doing to fill the time, asking older ones how sports in Bonac helped shape their lives, breathing new life into breathless accounts of years past, and the like.

Still, the constrained feeling remains. And so I resort to jokes, such as imagining that Mary and I are at a drive-through and I’m saying, “Two burgers with everything, an order of fries, and one COVID-19 test, please . . . actually, make that two.”

Paul Friese, the production manager at The Star, liked that, and, after I’d told him Robert De Niro, known for being laconic, had once, at Alex Danyluk’s garage, “talked my head off,” brightened and said, “Ah, that explains it!”

Steve Bromley Sr. once said I was the best rewrite man he ever knew, so I guess I’ll have a chance to prove it. Mary said we could put the speaker on at home and that she would hold the phone so that I can type away.

I’ve been told, moreover, to lay off tennis — indoor tennis — for a while, which, of course, makes me even more antsy. (If I feel this way, I can’t imagine what the teenagers on East Hampton High’s teams feel like.)

So, anyway, if you do know of anything of even a vaguely sporting nature, please inform. Because for the moment, in contradistinction to what my answering machine at the office says, I’ll not, in the near future at any rate, be either at a game, going to a game, or coming from a game.

Feel free to send me an email at [email protected].