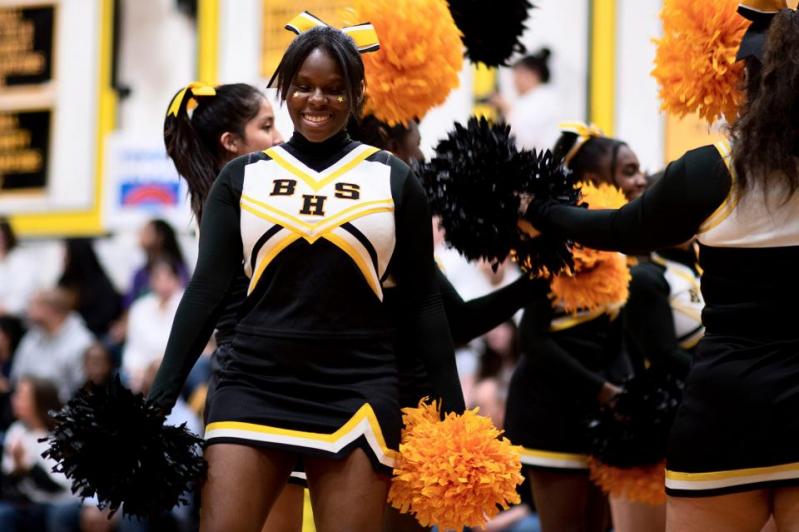 Fromm, East Hampton’s senior 158-pound contender, had not been seeded, but by the time he was through, he had upset the division’s first, fourth, and fifth seeds before grudgingly yielding 5-3 to third-seeded Chris Brodmerkel of West Islip in the final.

The defining moment of Saturday’s County Class D championship game between Bridgehampton and Southold came late in the contest when a giddy Maurice Manning, the Bees’ sensational freshman guard, skipped downcourt, his shooting hand held high in a follow-through motion, and his infectious smile brightening the stark gym at Longwood High School.

. . . The Bees, who finished 8-6 in League VII play, blew out the 12-2 Settlers 80-60, ruthlessly and without mercy, coasting wire to wire in a game that for all intents and purposes was decided soon after it started.

Manning put on a shooting display to be remembered, nailing six bombs in as many attempts en route to a game-high 25 points.

Rich Sperber has got a tiger by the tail in the form of a new and burgeoning roller hockey league here, which he has brought under the aegis of U.S.A. Hockey, the organization charged with developing the sport of hockey in the United States since 1937.

The local league is open to all East Hamptoners ages 5 to 16, boys and girls. A recent sign-up drew 85, now divided among 12 age-group teams. Some older players — junior high and high school age — are still needed, said Sperber, who began planning the league in October with Bob McCall and Rob Wood.

At the Youth Park roller rink on a recent Saturday morning, one of the coaches, Dan Cebulski, pointing to 7-year-old Emily Janis, said, “That’s Emily. She’s good. She’s on our team. She’s been skating for 20 years.”

. . . Sperber and Chris Whitney spurred a petition drive for an enclosed town ice rink a few years ago, but the idea was put on a back burner, primarily because of the estimated $2.5 million cost. “Bob McCall and Jim LaGarenne [among a number of locals who play ice hockey at The Rinx in Hauppauge] are still pushing for one,” Sperber said. “Basically, I think some type of ice-skating rink would be nice. I think it could sustain itself. There’d be high school leagues.”

Gail Tiska said that when she walked into the AIRescue International Lockheed JetStar at MacArthur Airport in Islip last Thursday afternoon and saw her 24-year-old son Michael’s chest “going up and down, that was enough for me. Just to see him alive.”

Six days before, on Feb. 18, Mr. Tiska had slid and fallen 1,000 feet during his and a friend’s descent of 12,701-foot Mount Fitz Roy in Patagonia, on the Argentina-Chile border.

“It’s one of the most difficult climbing mountains in the world,” said Mrs. Tiska, who lives in Bridgehampton. “It was mainly a rock climb, but Michael was very experienced . . . he spent all last summer in Yosemite, training for this climb.”