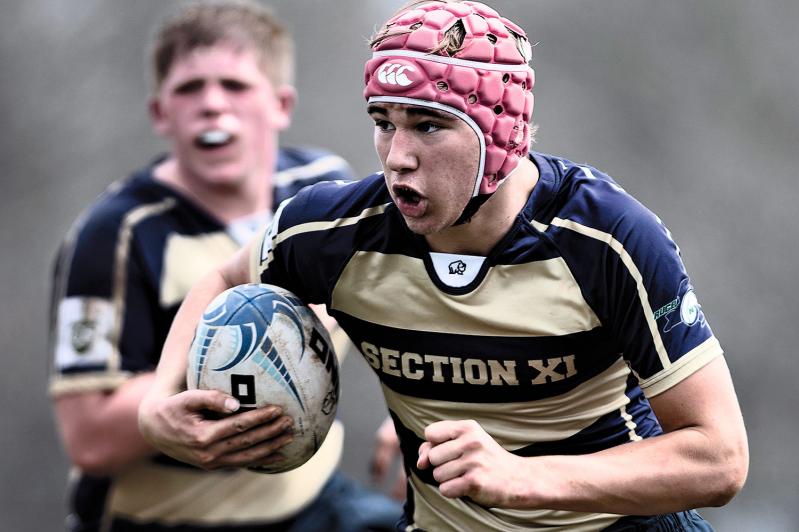 Kevin Bunce Jr. has recruited 15 or so Bonackers to the cause.
Craig Macnaughton
By Jack Graves

“We can either win everything or we can bomb,” Kevin Bunce said the other day at The Star’s office, having come in to talk about the Section XI Warriors, the eastern Suffolk high school-age rugby side he coaches, which has been augmented this spring, thanks largely to the recruiting efforts of his son, Kevin Jr., by about 15 players from East Hampton High School.

“At the moment, we’ve got about 31, in all, from here, Mount Sinai, Miller Place, Shoreham, Babylon, Mattituck. . . . One thing we’ve got is plenty of speed, which can make a difference, but we could get killed because we just don’t know enough.”

Whether it’s to be win or lose, Bunce says he’s excited by the rise in numbers and enthusiasm. “It’s the most we’ve ever had, so it’s exciting. Then you ask yourself, how many will stick? We won’t know until the first match [scheduled to be played at Baker Field in northern Manhattan with Simsbury High School of Connecticut, the 50th-ranked high school team in the nation]. Until they get hit,” he said with a knowing smile.

The Warriors practice Tuesday and Thursday evenings at the Calverton park across Route 25 from Calverton National Cemetery, and on Sundays, from noon to 2 p.m., at East Hampton’s Herrick Park.

“It’s just our first week of practice and we’ve got a lot to cover. Many of these kids have never seen rugby; they don’t know the rules . . . when you can tackle, when you can’t . . . the offside line is wherever the ball is. If I kick the ball over your head, you’ve got to recycle back around the ball.”

“And the penalties go quickly. You’re not allowed to tackle within the first 10 yards. If you do, it’s another whistle, and you’ve got to move back another 10. No forward passing — some kids didn’t even know about that. There’s a lot to go over and there’s not that much practice time . . . the set pieces, scrums, lineouts, not paying attention on the kickoffs. . . . Our kicking is hilarious.”

It was true, Bunce agreed, that you learn by doing, “and,” he added, “by what the other team is doing to you.”

Silly things had hurt the side last season. “The kids were saying they could have won the division [they play in the Greater Empire Union’s Downstate Division II] if it weren’t for a couple of penalties.”

Some were football players, some were wrestlers, the sports more or less going hand in hand, Bunce said, “though the fitness level is much higher in rugby. At our level, if you’re a back, you run between three and four and a half miles a game. If you’re a forward, you run two to two and a half, maybe three, depending on how mobile you are. There’s a lot more running than in football. Rugby’s a wrestling match between each sprint.”

“So, it’s tough to say. I think they’ll do pretty well. We’ve got our first game on our six-game schedule with Simsbury on March 21st. As I said, they’re ranked 50th in the nation. We’re not ranked, but we always try to play the best teams. We’ll see what we’ve got in this first match.”