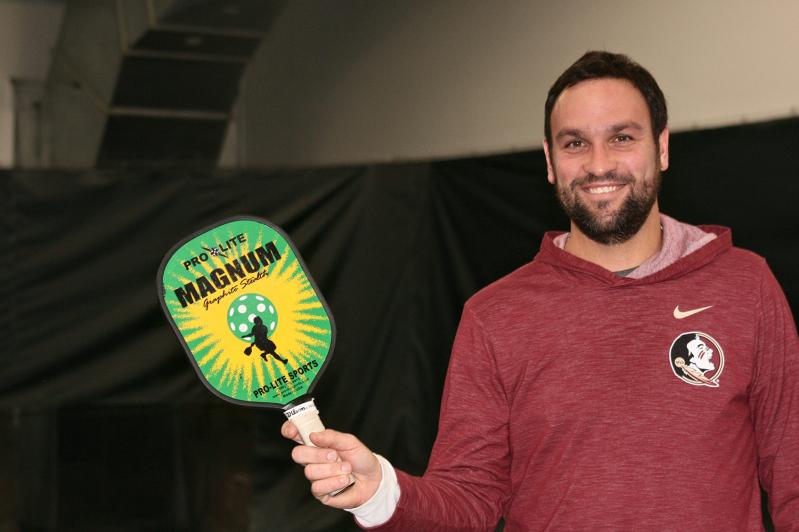 Yesterday or today, Matej Zlatkovic, a pro at the East Hampton Indoor Tennis Club, was to have begun overseeing pickleball games on one of the club’s indoor Har-Tru courts — the first time apparently that the sport, a volley-heavy miniature version of tennis played with paddles on a badminton-size court, has not been played on a hard surface here.

Zlatkovic, a native of Slovenia who has coached women’s tennis at Florida State University, Rice University, the University of Pennsylvania, and Yale, said Friday during a break in his busy tennis lesson schedule that he was curious to see how the game would play out on Har-Tru. A perforated polymer ball is generally used in pickleball, though Zlatkovic, who also is a platform tennis instructor at E.H.I.T., has a soft rubber one of the same dimensions ready should tennis games be going on within any of the other five indoor courts.

Playing on a Har-Tru court ought, he said, in answer to a question, to make it easier on the knees, a selling point for players over 55, an age group from which the sport’s largest constituency comes.

Zlatkovic has been giving pickleball clinics and lessons on the club’s raised, wire-wrapped outdoor platform tennis courts since arriving at E.H.I.T. this past fall. He and his wife, Mirinda, a jewelry designer, live on Shelter Island with their 4-year-old son, Nikola.

The paddle and pickleball courts’ dimensions were the same, he said, other than the fact that the pickleball net was an inch lower.

Defense, however, is largely the name of the game in paddle, whose adepts can repeatedly extend points by lobbing back hard drives caroming off the wires, in squash fashion, while in pickleball offense largely rules, though players are prohibited from volleying within a zone (“the kitchen”) seven feet from the net.

“Down in Florida pickleball is super popular,” Zlatkovic said. “The court is a quarter the size of a tennis court, there’s less movement, which makes it popular among the baby boomers, and it’s quick, fun, and exciting. People are more relaxed, I think, when they play pickleball — they don’t take it quite as seriously as they do tennis, say. It’s more social — everyone’s closer and talking. It’s really popular with older people, but it’s fun for any age.”

It takes 10 minutes, he said, to put down the pickleball lines on a tennis court, though the problem thus far has been scheduling games when the demand for tennis court time is not great. “We need to arrange the time when it’s best, on weekday afternoons and after 6 o’clock, say.” Anyone interested in playing could email him, Zlatkovic said, at [email protected].

(Pickleball is also played at the Montauk Playhouse, every day of the week, and at the Sportime Arena in Amagansett on weekends, under Sue de Lara’s direction.)

“If it goes well,” the interviewee said, “we’ll extend it to weekends.”

He was, as aforesaid, eager to see how people would react to playing on Har-Tru. It was played on Har-Tru at a couple of clubs in Florida that he knew of. It not only would be easier on the knees and on the body, but the ball, whether plastic or rubber, would bounce normally.

Pickleball was easy to pick up, Zlatkovic added. Tennis players would have to learn, however, that they simply could not serve and rush the net in pickleball owing to “the two-bounce rule,” which requires that the serving team stay back and play the return off the bounce (as is also required of the receiver) before rushing forward. Nor could players advance within the seven-foot non-volley zone, except in trying to play back dinks that land within the kitchen.

“You have to serve underhand, and you want it to go as deep as possible — you want to keep them back, keep your opponents away from the net. And when you get to the net, you want to place the ball well. Down the middle is good, or right at them. You have to know also when to dink, and how to dink it. Once you’ve got that, you’ve got it,” Zlatkovic said with a smile.