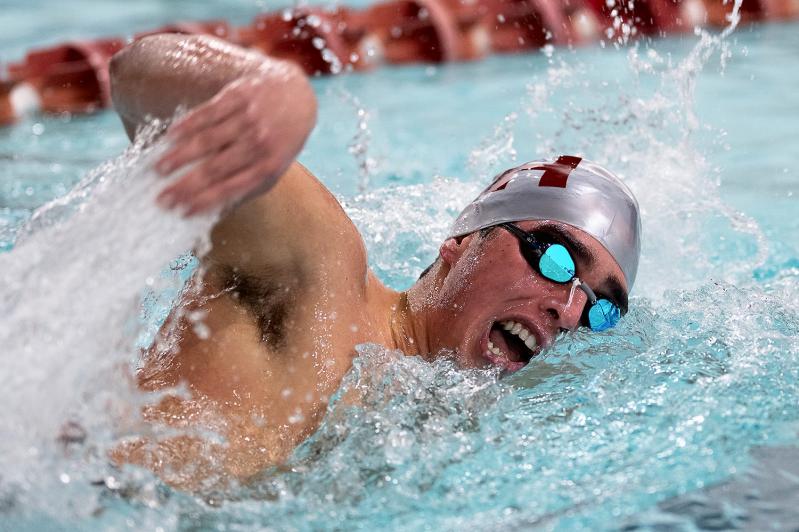 Aidan Forst was Bonac’s sole winner, in the 500, but the team’s depth proved decisive. The captains named Forst swimmer of the meet.
Craig Macnaughton
By Jack Graves

Craig Brierley, who coaches East Hampton High’s boys swimming team, said in an emailed account of last Thursday’s League II meet that “it had the makings for us to accomplish something extraordinary . . . for the second consecutive season we were the league champion.”

The challenge, he said, was the format, which awards points to each event’s top 12. “We needed to score enough points in the individual events and relays to overcome what other teams might win in diving.” (East Hampton does not compete in diving.)

“By the time we reached diving, the fifth event, we already led Hauppauge 124-75, and after the diving, even though a Hauppauge diver took first place, we were up by 124-91.”

The meet, held at Hauppauge High School, began with East Hampton’s 200 medley relay team of Joey  Badilla, Jack Duryea, Colin Harrison, and Owen McCormac finishing second to Hauppauge’s entry by a little over a second — 1 minute and 40.39 seconds, a state-qualifying time, to 1:41.81, a county meet-qualifying time.

“Our approach to this meet was no different than at any other meet,” Brierley said. “The boys were asked to control what they could, i.e., effort, attitude, and preparation, and were asked to give it their absolute best. Which they did: Bonac outscored all the other schools in each event, building and building on its lead. No other team could match our depth.”

“Adding to the excitement,” said Brierley, “was the fact that our 200 free relay team of Colin Harrison, Jack Duryea, Fernando Menjura, and Owen McCormac dropped almost four seconds from their previous best in earning a trip to the state meet later this month.”

East Hampton’s team of Nicky Badilla, Forst, Joey Badilla, and Menjura was the runner-up to Hauppauge in the final event, the 400 freestyle relay, in 3:27.89, half a second shy, to cap Bonac’s scoring at 307 points. Hauppauge placed second, with 241; Northport third, with 220; Sayville-Bayport fourth, with 154; West Islip fifth, with 143; North Babylon sixth, with 106; Deer Park seventh, with 105, and Lindenhurst eighth, with 53.

“In the end, our boys put up 21 lifetime personal bests and all three relays went season-best times,” said East Hampton’s coach. “If an athlete did not go a best time he was very close to it. The boys really demonstrated what their training prepared them to do — to compete and reach for the greatest heights together.”

The county meet is to be held Saturday at Suffolk Community College-Brentwood, beginning at 10 a.m.