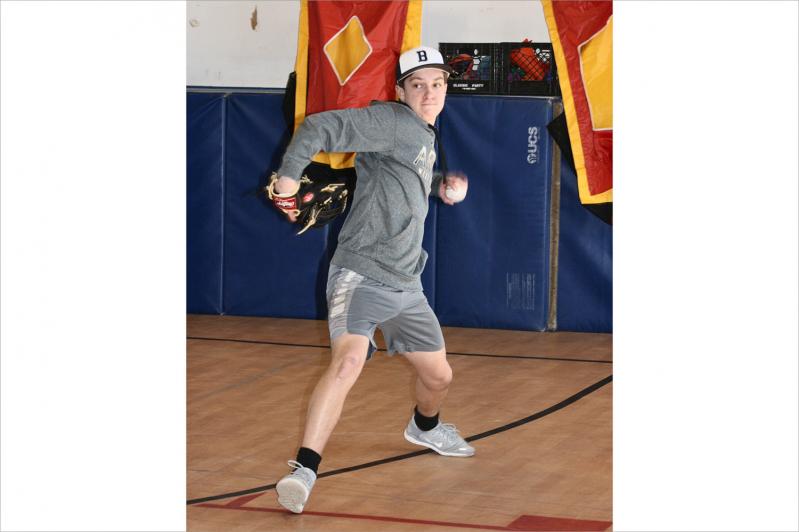 Scott Vinski, a Bridgehampton ninth grader and one of three left-handed pitchers Lou Liberatore mentors, recently made the last basket in the school’s superannuated gym.
Jack Graves
By Jack Graves

It’s been 40 years or so since Brid­gehampton High School has fielded a baseball team, though one’s in the making at the moment, at the instance of Lou Liberatore, a former Bayport-Blue Point High School and Molloy College pitcher who is a fifth-grade teacher there.

Having received the athletic director Mike DeRosa’s blessing, Liberatore has been working with about a dozen youngsters — a group that includes the Vinski twins, Scott and Kris, who are ninth graders, Milo Tompkins, a Ross School eighth grader, and Kai Alversa, a sixth grader whose father, Vinny, is East Hampton’s varsity coach — with the idea that they’ll play a junior varsity schedule in the spring of 2021, on a diamond behind the school’s addition that is being built now. Bridgehampton, the host school, will combine with Ross in the sport.

Mention of baseball at Bridgehampton brings to mind the teams of the mid-1950s on which Carl Yastrzemski, Billy DePetris, and Bill Stavropoulos played. That team, coached by Merle Wiggin, a recent inductee into the school’s Hall of Fame (thus joining the above-named) went 29-1-1 from 1955 through ’57, a year in which the senior class was said to have numbered 18.

“After the dust had settled [on the county-championship game of ’57, which the Wigginmen won 1-0 thanks to the no-hit, 18K pitching of Yastrzemski] a question mark arose,” an unsigned front-page story in The Bridgehampton News concluded. “How long will it be before Bridgehampton can field a team of this caliber? The game may have been the finale of a ‘Golden Era of Sports.’ ”

A golden era was yet to come, of course, but in basketball, not baseball — first under Roger Golden, who won three state championships, then under John Niles, who won two, and then under Carl Johnson, who won four.

Johnson, who’s to be inducted into the state Basketball Hall of Fame later this month, pitched and played shortstop on the 1979 varsity baseball team, whose coach was Mark McKee.

The Star files show that there was a team in 1980, coached by Howard Kotin, who at the beginning of the season — he had only 10 players on the roster — said it would be “a building year.” And that was that insofar as the reporting of games went that spring. McKee, then, presumably coached the last baseball team to play out a full season in Bridgehampton.

“We had no team in ’78 — otherwise, I would have coached it,” the retired Springs School athletic director said in a telephone conversation Sunday. He moved over to the East Hampton School District in 1980.

McKee remembers Johnson and Wayne Hopson as being “very, very good ballplayers. . . . Our problem was numbers.” When this writer said he‘couldn’t recall exactly what the ’79 team’s record was, McKee, whose goal, he said, was to keep baseball going at Bridgehampton, thanked him.

“I love it that they’re reviving it,” the former coach said of Liberatore and DeRosa’s effort. “Billy DePetris told me when he was pitching and I was catching for Bobby Vacca’s hardball team that Yastrzemski used to hit the school building in practice, which was quite a shot.”

That it had been so long since Bridgehampton had had a baseball team elicited a “wow” from DeRosa during a recent conversation with Liberatore at the school.

Liberatore, who played with a talented East Hamptoner, Deilyn Guzman, when at Molloy, coached the Bayport-Blue Point team for five years before coming to Bridgehampton three years ago.

“Lou’s idea has been to bring baseball back to Bridgehampton since the day he arrived,” DeRosa said. “It’s a four-year plan. He’s been at this for two and a half

years now, building up interest among the younger kids.”

Liberatore works with his group in the superannuated gym — the site recently of the last basketball game ever to be played in it — “at least one day a week after school,” and also oversees sessions at the Hayground School nearby on Saturday mornings. Periodically, he takes his protégés to Paul Gibson’s All Pro Sports Academy in Bellport.

The Vinski twins, whose late grandfather Ed was said to have been a very good ballplayer — their late grandmother Kathleen was a highly regarded elementary teacher for years at the Springs School — and Alversa are left-handed pitchers; Tompkins, rehabbing a torn anterior cruciate ligament at the moment, is a catcher, though he can play any position, Liberatore said.

“Hopefully,” said Liberatore, “we’ll play the first year as a jayvee and have a varsity the year following.” Shelter Island, he said, had gone about reviving its baseball program in the same way.

Kai’s father, who is working hard to revive the baseball tradition at East Hampton, had been very encouraging, as had DeRosa, Liberatore said.

With Yastrzemski having gone to the school, “They’ll obviously have somebody to emulate,” Liberatore said, adding that “if any of them get to be anywhere near like him, it would be great.”

Trees, Wreaths for Sale in Amagansett
Holiday Cheer Is Coming to Sag Harbor
Even More Thanksgiving Options From the Pike and Old Stove
END_OF_DOCUMENT_TOKEN_TO_BE_REPLACED