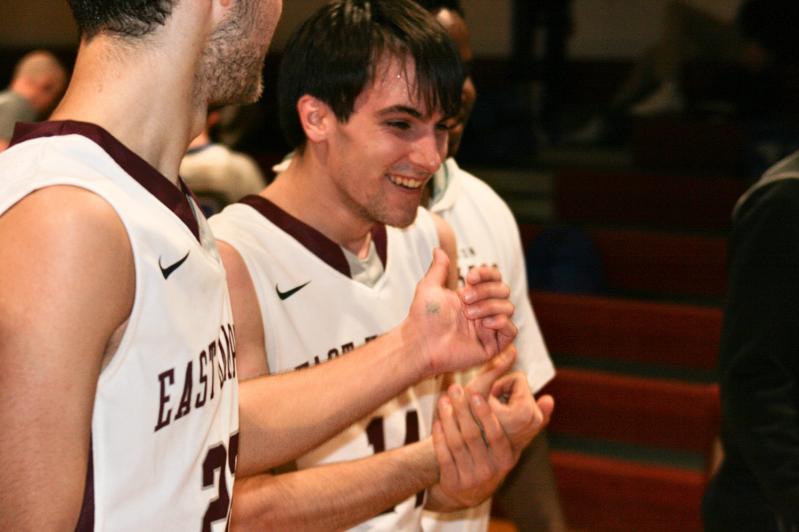 Logan Gurney was the man of the hour in East Hampton’s season finale with Hauppauge on Feb. 5.
Jack Graves
By Jack Graves

“Now that’s basketball!” one of the East Hampton High School boys basketball team’s fans exulted after Logan Gurney nailed, in the final second, a 3-pointer from the right wing that treated the Bonackers to a 57-55 win over favored Hauppauge on Feb. 5.

It was the last game of the season for Dan White’s team, and “senior night,” which prompted him to start the team’s seniors, namely Gurney, Jeremy Vizcaino, Frank Bellucci, Liam Leach, and Nick Esquivel, a group that was on the floor, White said, “for 20 to 25 minutes and played very well, I’m very proud of them.”

This despite the fact that Leach and Gurney had been sidelined lately by respiratory problems — pneumonia in Leach’s case, bronchitis, it was said, in Gurney’s case.

Charlie Condon, the 6-foot-4-inch junior center, was absent that night “because of the flu,” which had also kept him out of a game earlier in the week, a 57-38 loss at Harborfields.

East Hampton finished the season at 4-12 in league play, and at 7-13 over all, but whatever the disappointments during the past months all was forgotten in the finale’s final moments.

Luke Reese, the freshman point guard, played a large role in the comeback. A foul shot by him in the waning moments brought East Hampton to within 55-54, after which the Bonackers turned the ball over at midcourt, eliciting groans from their fans. But they got the stop, and thus a chance for the last shot.

“The plan wasn’t for me to get the ball,” said Gurney, who was mobbed in the game’s frenzied aftermath, with a broad smile.

White, who slapped this writer a high-five in heading off the court, explained the final play thus: “Nick was to set a ball screen for Luke, so he could get into the paint. Once there, he had three choices — he could either pull up, dump it off, or kick it out. Luke passed to Liam, Liam passed to Frank, Frank drove the baseline, and then made that extra pass out to Logan on the right wing.” And the rest was history.

Gurney was told he has a habit of coming up big — in a rare varsity boys lacrosse game played here last spring, he grabbed the headlines owing to the five goals he had scored and the two assists he had made in a 9-6 South Fork Islanders win over Brentwood.

That team, by the way, which has been based at Southampton High School — Southampton’s Matt Babb being the coach — is to split its practices and home game sites this spring.

Back to basketball, White, when asked if his underclassmen, a number of whom he started in the season’s last seven games, would play in the off-season, said, “Oh my God, they better. . . . I’ll be here every day of the week. We’ll play in a summer league. They’re going to be playing three to four games a week. They’re coming on, but they’ve got to put a little more time in.”

League V’s top five — Hills West, Kings Park, which finished in a tie for the title, each at 15-1, West Babylon, Hauppauge, and Harborfields — have made the playoffs, whose outbracket games were to have been played Saturday.

Shelter Island and Smithtown Christian are to contend for the county Class D championship at East Hampton High School tomorrow at 4:30 p.m., with the C championship game between Pierson and Southold to follow at 7.

The Whalers, who finished atop their league at 12-0, bested the Settlers the two times they met in the regular season. Shelter Island and Smithtown Christian, which each finished at 8-4 in league play, split.

The C and D winners are to play at Centereach High School Wednesday at noon. The county small schools (B-C-D) championship game is to be contested at Walt Whitman High School in Huntington Station on Saturday, Feb. 22, at noon.