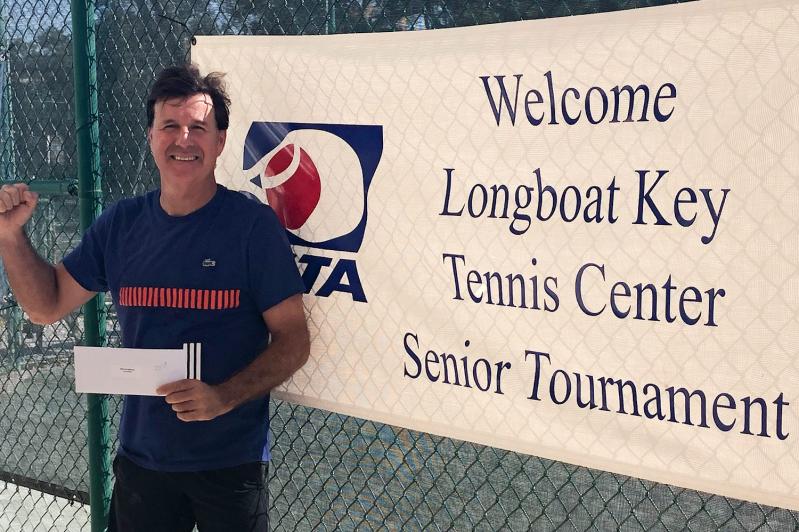 Had he been able to play in more tournaments — the ones with the most points occurring in the summer, when he’s busiest — Horcasitas’s year-end ranking presumably would have been even higher.

At the 64-draw tournament in Longboat Key, near Sarasota, after receiving a first-round bye, the fifth-seeded Horcasitas defeated Collen Smith of Suwanee, Ga., 6-2, 7-6, Eric Worst of St. Charles, Ill., 6-1, 6-0, and Rill Baxter, the fourth seed, of Sarasota, 2-1, default, before meeting the second-seeded Cliff Coleman of Lakeland, Fla., the defending champion, whom he bested 6-2, 2-6, 6-3 in the semifinal round.

That set up a final with Jeff Chambers, the top seed, of Treasure Island, Fla., whom Horcasitas dispatched 6-4, 6-3.

He was a late arrival at the Fiesta Bowl in Phoenix, but was inserted as an unseeded entry in the 32-draw tourney “when another guy pulled out.” After receiving a first-round bye, he quickly disposed of his round of 16 opponent, Tim Piganelli of Phoenix, 6-1, 6-0 before ousting the top-seeded John Saviano of Los Altos Hills, Calif., a former number-one in the 50s, 6-1, 6-2, an especially pleasing result given that Saviano had defeated Horcasitas in three sets in the quarterfinal round of a tournament in Las Vegas — where Horcasitas had grown up — in November.

Curtis Crawley of Mesilla, N.M., was Horcasitas’s victim in the semis, by scores of 6-1, 6-0, and he won by default over the second-seeded Reed Radosevich of Las Vegas in the final.

It was the Water Mill resident’s first year in the 55s. In the past, he’s sustained injuries — a torn labrum, a pulled hip flexor, and a ripped hamstring among them — that required rehabilitation.  But lately, he said, he has benefited from training with Joao Monteiro of Core Dynamics, who has helped increase his strength and stamina and improve his diet. “No sugar anymore,” said Horcasitas. “And pickle juice, I’ve found, keeps you from cramping up.”

Also, Gary Clermont of the East Hampton Tennis Club and Mark Harrison, the pro at the Bridge, have helped hone his game, he added, as has his coach, Oren Ovasel, a former Israeli touring pro once ranked 150th in the world.

In all, Horcasitas won three of the four U.S.T.A. age group tournaments in which he played during the past year, beginning with the Miami Beach Tennis Cup in March, where he swept through each of his four opponents in straight sets.