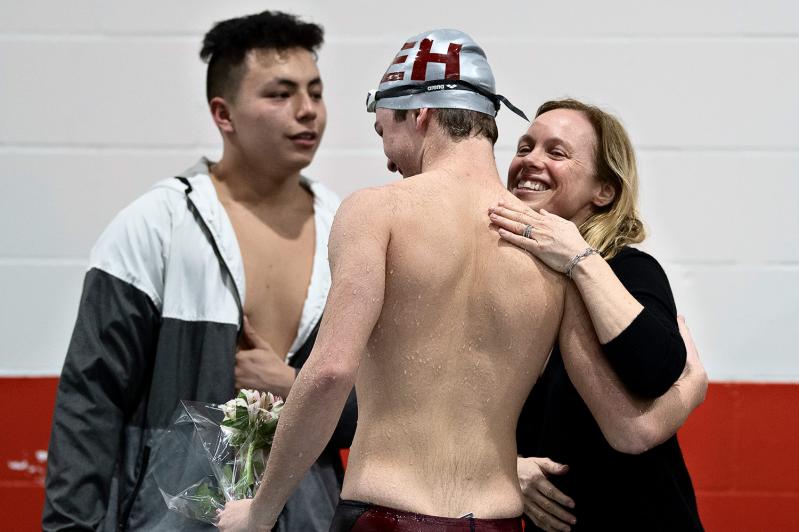 Callum Menelaws, back to the camera, was one of six seniors cited before East Hampton’s boys meet here with Sayville-Bayport last Thursday. With him were his mother, Laura, and a teammate, Fernando Menjura.
Craig Macnaughton
By Jack Graves

For the second straight year, as the result of a rather easy win here over Sayville-Bayport last Thursday, the East Hampton High School boys swimming team has gone undefeated in league competition.

Though Craig Brierley, the head coach, said during a conversation following Saturday morning’s practice that had the team finished at 4-3, rather than at 7-0, he would not feel differently, his main concern being, he said, to challenge his athletes to get better whatever their level might be — to improve not only as athletes, but as people.

League-wise, East Hampton, he ag­reed, really didn’t have a close meet, owing to the team’s great depth. The B relay teams were, he said, right up there with the A teams. Other than East Hampton’s back-to-back league championships, the season has been notable too for the fact that one of the meets, a nonleaguer with Connetquot-East Islip here on Dec. 5, ended in a tie, at 85-85, the first tie that Brierley said he could recall.

“I never know what to expect,” he said when asked if he’d been surprised by this year’s success. “I don’t scout the other teams — I take it one meet at a time and try to keep the kids focused on the training process [the team practices six days a week] and trying to get a little bit better every day. If they do that, the outcomes will take care of themselves.”

The team’s six seniors — four of them East Hampton High School and two of them Pierson (Sag Harbor) High students — were cited before Thursday’s meet at the Y.M.C.A. East Hampton RECenter, swimming a traditional lap before it began. That group comprises Aidan Forst, who is to study biology at the University of Massachusetts at Dartmouth, Will Midson, who is to be a pre-med student at Fordham, Gabriel Ramundo, who is to study sports management at Suffolk Community College, Miles Coppola, who is to study political science at Roger Williams University in Bristol, R.I., Callum Menelaws, who is to study mathematics at Boston University, and Conor Flanagan, who is to study business at the College of Charleston.

Brierley said, in reply to another question, that he thought the team had a good chance to repeat as the league champion at Hauppauge High School today. Last year’s team was also the county meet’s runner-up.

No one had qualified as yet for the state meet, he added, though Owen McCormac, a junior, was about a half-second shy of qualifying in the 50 freestyle, and Fernando Menjura, Colin Harrison, and Forst were also “in the ballpark” in that event. Ditto the 200 medley and 200 free relay teams. They’ll have two more chances, at today’s league meet, and at the county meet on Feb. 8 at Suffolk Community College-Brentwood.

As for last Thursday’s meet here, Brierley said in an email report Monday that “our first swimmers did their jobs up front and the second and third swimmers followed through, so, together, that was way too much for Sayville to respond to. . . . We took first and third in the opening event, the 200 medley relay, and swept the second event, the 200 free, bumping the score up to 23-7. From there on, our boys outscored Sayville in every event but one, the 500 freestyle, which ended in a tie at 8-8.” The back-to-back league championships, Brierley added, had been “a program first.”

When this writer observed that it was always great to see the last-place finisher in the 500 applauded, by both teams and the spectators, Brierley said that applause was warranted, “for the effort.”

Daniel Sarlo, a first-year junior, was the recipient of that applause Thursday. “We do three 500 time trials, at the beginning of the season, in the middle, and at the end, to see where we’re at. After the first one, he came up to me and said, ‘Coach, I want to do the 500 in every meet.’ You don’t hear kids asking to do the 500 all that much. He has done it almost every time and he’s steadily improved — his time has dropped a lot, and he’s learned something each time out.”

Challenging his charges to step out of their comfort zones from time to time has proved to be productive, Brierley added. “We’ll put them into an event they’re not particularly used to, and often we’ll find — and they will too — that they’re good in it.”

The team’s swimmer of the Sayville meet was Harrison, a junior who “went best times in all three of his events — helping two relay teams to first-place finishes and winning the 100 butterfly.”

Results will flow if the process is followed