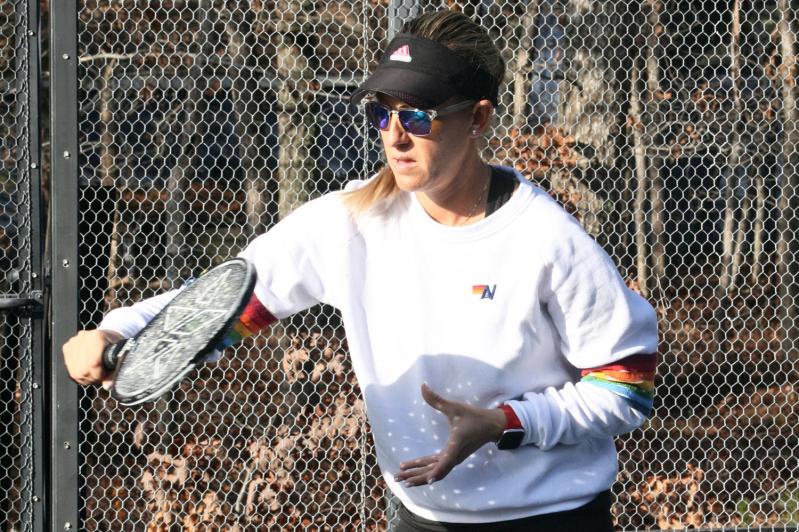 The outdoor courts at the East Hampton Indoor/Outdoor Club in Wainscott were filled last week on a freakishly wonderful day weather-wise, as were the club's two elevated, wire-enclosed platform tennis courts where a three-time national champion, Ana Brzova, and Mike Gillespie, a member of the American Platform Tennis Association's Hall of Fame, gave two-and-a-half-hour clinics in the morning and afternoon to 16 players who presumably benefited greatly from their instruction.

The club's platform tennis membership "has quadrupled," Scott Rubenstein, E.H.I.T.'s managing partner, said, which is to say there are about 60 now playing the outdoor winter sport there — paddle, as it is known, being one of the few sports, like golf and tennis, deemed reasonably safe to play during the coronavirus pandemic.

Nonmembers, if they pay a guest fee and call the club to reserve court time, are welcome to give paddle a try, Rubenstein added.

Zlatkovic, who has coached women's tennis teams at Florida State, Rice, Penn, and Yale, gives lessons, though he yielded the almond-shell-covered green floor boards on Sunday to the aforementioned pros from the Indian Trail Club in Franklin Lakes, N.J., whose platform tennis program, the largest in the country, numbers almost 400 players who fill its 10 courts every day during the September-to-March season and beyond.

"Yes, at the moment it is one of the few games in town," Brzova agreed during a telephone interview last week, "and one that is easy to pick up if you've played tennis, though the strategy is totally different. In doubles tennis you're looking for winners. Platform tennis is about patience and placement. It's like chess — you have to have a plan."

In paddle, she said, it's 80-percent backhand volleys, 20-percent forehand, though lobs — a big part of the game — require well-placed forehand returns, often toward the wire-enclosed corners, not the overhead smashes common to tennis.
Only one serve is allowed in platform tennis. "It's a serve-and-volley game," Brzova said. "The biggest thing is the first volley."

One of the clinic-takers, Gwen Sbordone, who also plays tennis regularly, said, "If you play tennis you can pick up paddle quickly. I would say it's a combination of advanced Ping-Pong, squash, and tennis, though it's faster than tennis. Hand-eye coordination is important. . . ."

"We've had these courts for a while," she continued, "though until now they haven't gotten that much play. I played at 3 o'clock on Sunday, and both courts were filled. . . . It's serve and volley — you have to come in. You get a good workout in an hour or an hour and a half. It's really a lot of fun."

"We want to help build the program here," Brzova said, "to grow the game — especially during this period when it's safer to be outside. It's our second time — we were out here in late October or early November. We plan to come out again at the end of January."