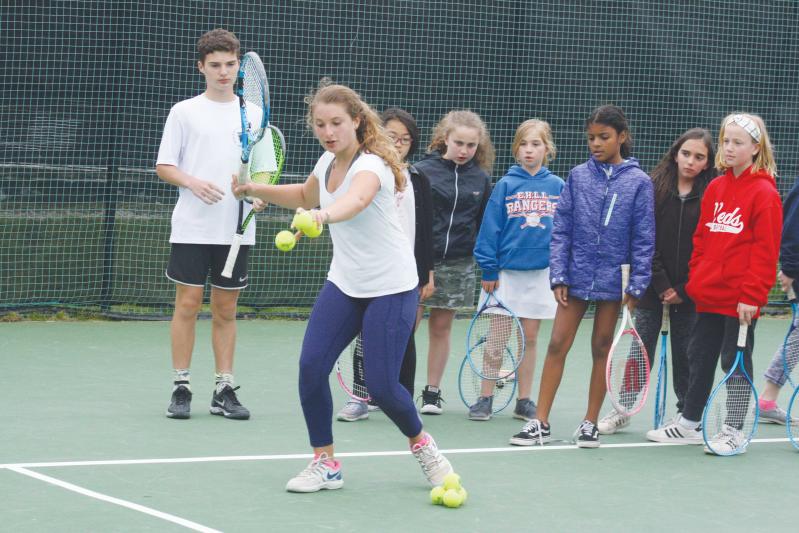 Ally Friedman, shown above teaching her charges how to hit a forehand at the Ross School last summer, is to receive the United States Tennis Association’s “junior volunteer of the year” award on Feb. 12 at the Nassau Coliseum during the New York Open tournament.
Jack Graves
By Jack Graves

Ally Friedman, a senior in the Ross School’s tennis academy, is to receive soon an award from the United States Tennis Association that commends her tennis-centered empowerment work here with young girls.

“Most of the 18 girls I had in my program this fall, girls from the ages of 7 to 12, had not played tennis before — they pretty much started from scratch,” the 18-year-old said during a conversation over the weekend.

Tennis, she said, was the vehicle used in building her charges’ confidence — just as basketball and triathlon were the vehicles employed by Mark Crandall in his South Africa-based Hoops 4 Hope work, and by Theresa Roden in her internationally recognized I-Tri program for teenage girls here.

The U.S.T.A.’s “junior volunteer of the year” was a member of I-Tri herself, as was her older sister, Tali, now a student at Butler University in Indiana. During Ross’s M-term break, she will work, as she did two years ago, with Hoops 4 Hope in Zimbabwe.

“Theresa and Mark kind of put me on the path,” Friedman said.

Dubbed “The Ball: Tennis, Health, Empowerment — Building Attitudes, Lifetime Lessons,” the program not only is the subject of her senior project, but could well become a career, she said.

Friedman began mentoring girls from the East Hampton area a year or so ago, 7 to 10-year-olds referred to her by middle school guidance counselors, pediatricians, therapists, and gym teachers.

“They keep coming back,” she said, with a smile, when asked if her charges liked it, “and the parents have been telling me how much they love it. . . . It’s been an incredible learning experience for all of us. We meet Wednesdays from 5:30 to 7 on one of Ross’s courts — the ‘bubble’ is up now — and for the first hour we work on our tennis strokes, and then, in the next 30 minutes, we work on improving ourselves through healthy eating, fitness, and through what Theresa calls ‘positive self-talk’ — thinking well of ourselves and each other.”

“I’ve got a curriculum now for a 12-week program — I’ve got lesson plans for each week with all the drills and other activities — built around what I call the three pillars, tennis, health, and empowerment. And within each of these there are subcategories. In tennis, for instance, the first four weeks we’ll work on our forehands, the second four on our backhands, and the third four on our volleying. All the pillars are intertwined. The second is health, maximizing our physical well-being through nutrition, and the third is empowerment, building belief in ourselves.”

“Mindfulness, focusing the mind, is a big part of it,” she added. “Concentrating on how your wrist feels when your racket contacts the ball, for instance . . . stepping outside of yourself, taking a moment to be aware of everything you feel, with no judgment. Looking at the big picture. Mindfulness is so important in daily life.”

She had, Friedman said in answer to a question, seen “clear improvements in how the girls in the program feel about themselves, in how they carry themselves. I’ve created surveys and diagnostic assessments — I can demonstrate that they are improving in every aspect. I’m so happy to have affected their lives. They’re getting better in tennis, for sure, but in everything else too.”

In the beginning, most were shy, she said, which was understandable. But then, as the girls began to get more comfortable with one another and with themselves — her random assignment of activity leadership roles had helped foster this, she said — they stepped up.

Besides Roden and Crandall, she was indebted, Friedman said, to the Ross Academy’s Marcelo Reda, “my personal coach, mentor, consultant, adviser, and cheerleader,” and to Larri Passos, a Brazilian teaching pro and Gustavo Kuerten’s former coach, with whom she’s worked and who has worked periodically with her girls.

Her own game, honed at the academy and in U.S.T.A. junior tournaments since her seventh-grade year, has, she said in reply to another question, been improving. She’ll play at Bates College in Lewiston, Me., come the fall.

As for the award, “it’s pretty cool. I’m very excited about it. I’ll get it at the Nassau Coliseum [on Feb. 12] during the New York Open,” at which John Isner, Nick Krygios, Milos Raonic, Kei Nishikori, Kevin Anderson, who was the 2018 champion, and Reilly Opelka, last year’s champion, are among those expected to play.

The Ball has grown, as aforesaid, well beyond the purview of her senior project. “I want to make it as big as possible,” she said. “I’ve developed it so that in the future I could give it to someone and they could carry it on. . . . I want to take it as far as I can and see what happens.”