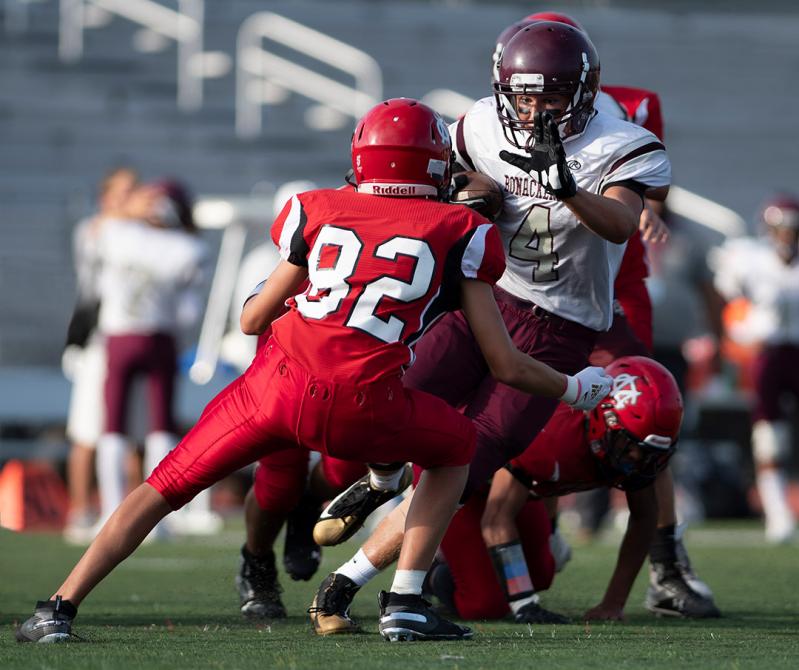 For the third time in the past few years, the possibility of East Hampton and Southampton High Schools combining football programs is being considered.

Joe Vas of East Hampton and Darren Phillips of Southampton the schools' athletic directors, agreed, following a meeting of 60 or so East Hampton parents, coaches, and players at the high school's cafeteria Thursday evening, to meet with their players Tuesday afternoon to learn what it was they wanted.

During a conversation Friday, Vas said that, based on the consensus arrived at in Tuesday's player-A.D. meetings, he would inform Section XI's placement committee of the decision the next day.

Last year, for the first time formally, the possibility of merging the two ancient rivals — the first East Hampton-Southampton football game was played in 1923 — was given serious consideration, but Southampton's parents, who, in Vas's words, "thought they had a playoff-caliber team," turned thumbs down, inasmuch as the playoffs would have to be forgone should the combined East Hampton-Southampton team remain in Conference IV.

This year, the shoe may be on the other foot: East Hampton, according to its coaches, Joe McKee, Lorenzo Rodriguez, and Kelly McKee, all of whom spoke on Thursday, is in a good position numbers-wise, fully expecting to field decent-sized varsity and junior varsity teams in the fall, while Southampton's high school numbers — its team finished at 2-6 last season — apparently are down to around 30 to 35 players.

Joe McKee, who has overseen East Hampton's program in the past five years, said that given the steadily growing participation in flag football and in the junior high and high school programs, "we've finally got the ball rolling here." He asked — a sentiment echoed enthusiastically by his brother Kelly — that East Hampton be given one more year. If East Hampton were rebuffed, he might try combining with Hampton Bays, Phillips said, when questioned after the meeting.

It is not just Southampton and East Hampton whose programs have been struggling. Greenport will not have a varsity this fall. Wyandanch and Babylon are thinking of combining. The numbers at Hampton Bays are down.

Vas said Friday that, all things considered, he favored combining with Southampton now, a move that he said ought to assure boys in both towns of a stable football future year in, year out.

"I don't want to be riding this roller-coaster every year," he continued. "Joe and Lorenzo have done a great job in rebuilding our program, and, for the first time in five years, they're happy with the numbers. But it's a gamble. How many of the sixth graders who've played flag football are going to play it in junior high? How many eighth graders coming up from junior high are going to play football when they get to the high school? Half the junior high team was eighth graders this fall. Are 20 coming up to the junior varsity or are five? As I say, it's a gamble. If we combine, we'll have stability."

Combining with Southampton in boys lacrosse was effective, he said.

"You combine because you don't have enough kids to sustain a program. We've done it in wrestling too — we're combined with Pierson and Bridgehampton in that. We had over 24 kids play in Southampton's lacrosse program. They had 24 too, so there were enough for a varsity and a junior varsity, and it meant that ninth graders would play jayvee and not get killed on the varsity level."

"Long Island lacrosse is the best in the state, you know. Combining enabled Southampton to field two teams; it made it better. This year we have 11 junior high kids who play lacrosse, and Southampton has 9. Together we'll have enough for a junior high team. If we weren't able to do that, 20 kids wouldn't be able to play. . . . We're not trying to build powerhouses, we're trying to build programs."

Should the football programs combine, the schools would go halvsies when it comes to practices and games — the same, Vas said, that is to happen this spring in boys lacrosse.

One combining option in football, he said, would be to play up in the power-rated Conference II's lower tier, against teams such as Deer Park, Bellport, and Copiague.

But, if Vas had his druthers, he would petition Section XI to allow a combined Southampton-East Hampton team play in Conference IV with the understanding that it forgo the playoffs.

"We had a good jayvee season this year, with only one loss, but the team that beat us, Bayport, had no juniors on it, just ninth and 10th graders, while we had 11 juniors. They beat us badly, 40 to 6. So, while we have the numbers, and that's great, we're still relatively new experience-wise." 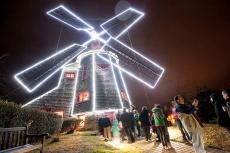