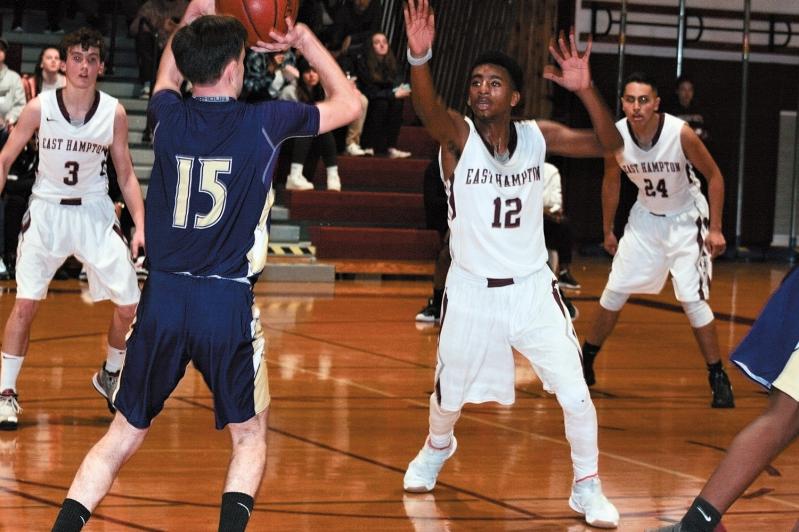 East Hampton stumbled in the third quarter of Friday’s game with Greenport, but hung on for a win that put it into the championship game with East Islip the next night.
Jack Graves
By Jack Graves

Given the transfer to Center Moriches of Ahkee Anderson, the all-state guard who led Greenport to the state Class C Final Four last winter, the Porters are not the team they used to be.

Still, they almost ate Bonac’s dreams on Friday, coming back in the third quarter to within a point of erasing a 13-point deficit in the third quarter, a run during which the Bonackers came up empty seven times before Jeremy Vizcaino, their senior point guard, drew a foul in making a layup. Vizcaino missed the free throw, but the ship had been righted.

In Vizcaino and Luke Reese, a poised freshman, White’s got good guards, and he’s got size too in Charlie Condon, who’s 6 feet 6 inches, and Travis Wallace, who, while somewhat shorter than Condon, is broad about the shoulders. Not to mention Liam Leach, who can hit the 3, and Logan Gurney, his fellow forward. They move the ball in dizzying fashion on offense in search of the open man, and play feverishly on defense, whether it be man or zone.

Moreover, in Wallace, Frank Bellucci, and Nicolas Esquivel, White has a trio who can spell starters without losing a beat.

Though, as aforesaid, things got a little shaky in the third period, East Hampton, while not shooting particularly well, led throughout the game, beginning with Liam Leach’s 3-pointer off Condon’s opening tip.

The Bonackers led 13-7 by the end of the first quarter. Three-pointers by Leach, Bellucci, and Vizcaino near the end of the second sent East Hampton into the halftime break up 26-17.

That lead was up to 13 when the Porters staged their comeback with about five minutes left to play in the third. A fast-break layup by Everett Corwin got the run going; a long 3 by Jahmeek Freeman sandwiched between misses

by Vizcaino and Gurney, the latter from 3-point range, shrunk the margin to eight.

Following another East Hampton miss, by Reese, Corwin canned a 3, for 32-27. Gurney missed in trying to reply in kind, after which Corwin put back Freeman’s layup attempt, cutting East Hampton’s lead to 3 points with 2 minutes and 20 seconds remaining in the period. White sent Wallace, Bellucci, and Esquivel in to relieve Condon, Leach, and Gurney at that point. A moment later, Esquivel fouled Corwin, who, after missing twice from the free-throw line, captured his own rebound and dished off to Donovan Lawrence under the hoop for 32-31.

That’s when Vizcaino’s layup, a turnaround bucket by Wallace, and another 3-pointer by Leach, who’d re-entered the game, began to right the ship.

A strong move to the basket by Wallace when the fourth began extended the margin to 10, and soon it was up to 12 thanks to two free throws by Reese. Greenport countered with a fast-break 2 by Jalen Stilley, but again Reese drew a foul, as he dribbled along the baseline, and again made both free throws, prompting a Greenport timeout.

The Porters, who were pressing hard now, pared the lead to 4 points, at 49-45, with 2:18 left to play, but yet another 3-pointer by Leach gave Bonac some breathing room, and Vizcaino’s dead-eye foul shooting — he was six-for-six from the free-throw line in the fourth quarter — took them home.

Vizcaino finished with 21 points, Leach with 12, Condon and Wallace each with 6, Bellucci with 5, Reese with 4, and Esquivel with 2. Freeman led Greenport with 14.

“I’ve got eight guys who can compete, who are solid, tough, and want to learn,” said White. “As I said, I was happy tonight with their effort.”