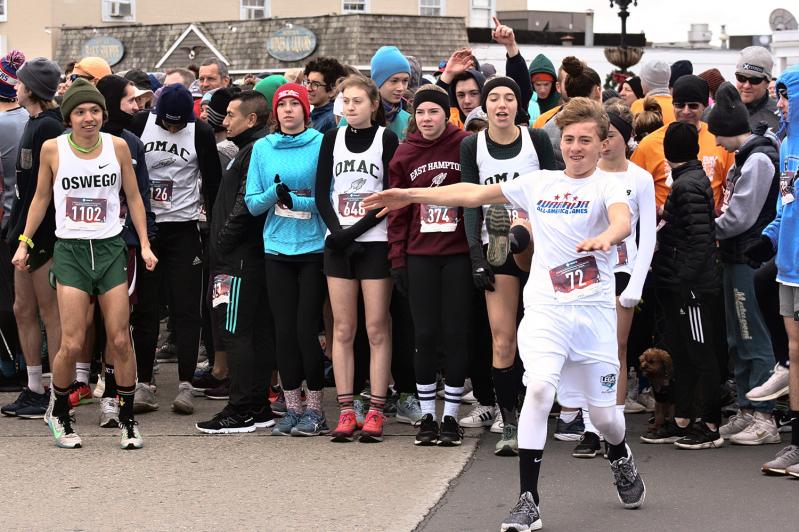 “Start the race! Start the race!” was the chant as runners toeing the starting line (that’s Luke Castillo at right) waited for scores more of race day registrants to join the flock.
Jack Graves
By Jack Graves

It was windy, but not very cold on Thanksgiving Day, and thus the turn­out for the East Hampton Town Recreation Department’s 3 and 6-mile Turkey Trots around Montauk’s Fort Pond was bountiful.

So bountiful in fact that Bob Beattie’s signal to go was delayed by the better part of a half-hour as registrants continued filing in and out of the Chamber of Commerce building. “Start the race! Start the race!” the hordes, champing at the bit, began chanting after a while.

Finally, they were off, though not Geronimo, Megan Gubbins’s Portuguese water dog, who, with Megan’s brother, Geary, topped all four-legged — and quite a few two-legged — competitors in 2015, covering the 3-mile course in 21 minutes and 39.6 seconds, good for 42nd among that year’s 645 finishers.

No, Geronimo would have none of it, and so he sat this year’s race out in the company of Megan’s mother, Barbara Gubbins, on the sidewalk near John’s Pancake House, watching as his owner sped by twice on her way to a win among the females in the 6-miler in 36:29.

At 37, Megan Gubbins, a lawyer with the U.S. Attorney’s Office who lives in Brooklyn and trains on her own, appears to be getting better and better. Ten years ago, she ran the New York City Marathon in 3 hours and 10 minutes, a time she bettered by four minutes at New York this year, and two weeks later, she ran a 2:59 in Richmond, Va.

Tim Rossi, 27, a part-time Sag Harbor resident, was the 6’s overall winner — apparently the fifth time for him, though it may be the sixth — in 32:15, besting Ryan Fowkes, nine years his junior, by about a minute and a half. The two ran side by side as they came down Montauk Highway toward the Circle near the end of the first loop.

Jennifer Fowkes, Ryan’s mother, said afterward that she had done the 3-miler “in less time than he did the 6 . . . I didn’t get lapped.”

She added that her son loved George Washington University, where he’s running year round and rooming with his cross-country and track teammates.

Runners had to battle a head wind for about a mile on their way up to a left-hand turn onto Industrial Road, and then, once they’d rounded the tip of Fort Pond, it helped push them up the hill behind the Montauk School.

“It was okay after you made the turn,” said Penelope Greene, the female winner — and 10th over all — in the 3-miler, which was won by Nicholas Berglin, 22, an assistant cross-country coach at Hampton Bays High School now. Berglin won the 3 last year as well, and was the runner-up in 2017. His twin, Christian — “he’s a little out of shape” — who won the 6-miler last year, placed 11th in the 3 this time.

Nicholas Berglin won the 3-miler handily, in 16:19.6, almost a full minute ahead of Erik Engstrom, a University of Massachusetts senior, who must not have been going full-out, for he ran a 15:40 in winning here three years ago.

Greene, who’s 16 and attends Pierson High School in Sag Harbor, topped the females, as aforesaid, in 19:15.6. Alyssa Bahel, a Denison University graduate, was the runner-up to Greene — and 20th over all — in 20:00.3. Dylan Cashin, 13, the county-champion East Hampton High School girls cross-country team’s second runner this fall, was third, in 20:24.5.

Craig Brierley, who coaches East Hampton High’s girls and boys swimming teams, said, when questioned, that he thought this winter’s boys team would be good, “though you don’t know from season to season what the other schools have. . . . I tell them if they do their absolute best, it will come. That’s true in life, too, isn’t it? Do your absolute best and keep going.”

No turkeys were handed out as prizes this year inasmuch as John Keeshan had sold his business, Beattie said, and was no longer a co-sponsor.

Keeshan, 80, who began the Thanksgiving Day tradition 43 years ago, running with 10 or 12 others out to Deep Hollow Ranch and back, a distance of about 5 miles, walked that day.

East Hampton’s food pantries are the Turkey Trots’ beneficiaries. Keeshan has said in the past that it seems right they should be “on this day of giving thanks.”