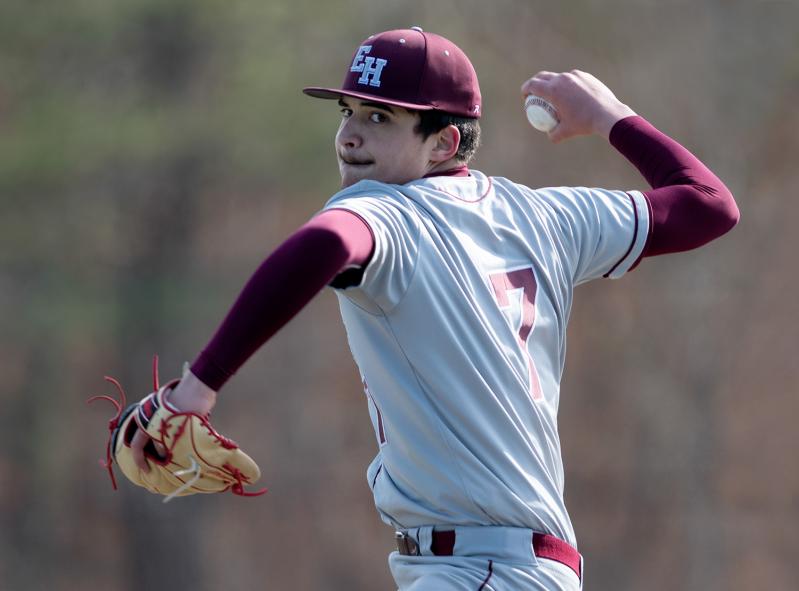 Elian Abreu’s fastball was too much for the meat of Shoreham-Wading River’s order.
By Jack Graves

While the East Hampton High School baseball team was to have played the first game of its second League VI series with Harborfields here Tuesday, it was the 6-3 nonleague loss last week to Shoreham-Wading River, a perennial baseball power, a school from which a couple of major leaguers have come, that commanded attention.

Vinny Alversa, Bonac’s coach, who, with Henry Meyer and Andrew Rodriguez, the junior varsity coach, has inspired his charges to play with purpose, said that April 17’s game here with the North Shore school “was probably the best we’ve ever played against them.”

Because it was a nonleague game, Alversa used four pitchers — Kurt Matthews, for one inning, Lou Britton, for two, Colin Ruddy, for two, and Elian Abreu for two. All pitched well, and while Ruddy, a tall freshman who normally plays first base, was tagged with the loss, he pitched well.

Shoreham started off with its number-three, but, when the Bonackers took the lead, at 3-2, after three innings of play, brought in its number-two, who went the rest of the way. (Matthews, it should be noted, had as of Friday been the only one in Suffolk County to get a hit this season off the Wildcats’ number-one pitcher, Aidan Crowley, who can throw 97 miles per hour.)

At any rate, Matthews gave up one run in the first inning, the result of a two-out steal of third base that drew an errant throw from the catcher, James Foster. A strikeout ended the frame.

East Hampton loaded the bases with one out in the bottom of the second, but Britton struck out, and Tom Desmond, the center fielder, who bats ninth in the lineup, lined out to the second baseman for the third out.

The visitors, who as of earlier this week remained undefeated, made it 2-0 in the top of the third, as the result of a run-scoring double by their cleanup hitter.

Then came the good news. Tucker Genovesi, the leadoff hitter, led off Bonac’s third with a full-count walk, Matthews followed — after Genovesi had stolen second — with a single, and Abreu, having worked the count full, drove Genovesi in with East Hampton’s first run. Foster, the cleanup hitter, then drove a grounder toward short that the shortstop misplayed in going for a force at second, which allowed Matthews to tie it up.

Zach Barzilay drew a full-count walk as well, loading the bases — still with no outs — for Austin Brown, the second baseman, whose short-to-first groundout accounted for East Hampton’s go-ahead run. The Ruddy brothers, Colin and Charlie, then struck out, Colin on a 3-2 pitch, and Charlie, who had come in for Britton, on a 2-2 offering.

Charlie Ruddy took over from his brother at first when Colin took the mound in the top of the fourth. The first batter barely beat out a dribbler to first, and the next hitter reached on a bloop to left that dropped in front of an onrushing Matthews.

A nubber resulted in the bases being loaded, after which base hits through the infield sandwiched around a flyout to Desmond in center accounted for four runs and a 6-3 Shoreham lead. Ruddy fanned the cleanup hitter to end the inning, and shut Shoreham down without a run in the top of the fifth.

While the Bonackers were not able to make up the difference — they stranded runners at the corners with two outs in the sixth and stranded runners at first and second with two outs in the bottom of the seventh — Abreu, who came on to pitch the last two innings, was very impressive indeed (a good thing inasmuch as Jackson Baris broke a knuckle on his pitching hand during the recent 14-1 route of Westhampton Beach, an injury that may sideline him for a couple of weeks).

Abreu, who has greatly improved his accuracy of late, mowed down the first batter to face him on a 3-2 fastball. The next batter drove a fly to center that Desmond, who made a one-handed catch, ran down. A 2-2 curve notched the third out.

The first batter to face Abreu in the top of the seventh, the third hitter, reached first safely on a bloop, but Abreu, whose fastball proved to be too swift for the meat of Shoreham’s order, struck out the next two and got the last out on a comebacker to the mound.

Abreu was called out on strikes to lead off East Hampton’s last at-bat, and Foster followed with a flyout to left, but Barzilay singled and Brown did too, keeping hope alive. Colin Ruddy then struck out on a 2-2 pitch, ending the well-played game.

During a practice Friday when this writer said to Alversa that Ruddy, who is only a freshman, would be “terrific some day,” he replied, “He already is terrific. . . . Shoreham’s beatable, but you have to play very well to beat them. That we loaded the bases with one out and weren’t able to score hurt. But, over all, I thought we did well.”

The coach agreed when this writer observed that his team seemed serious. “They are,” he said. “It’s taken a while, but they’ve come around.”

The junior varsity, 1-2 as of Friday, has been doing well too, Rodriguez said. “Shoreham has ‘mercied’ just about everyone, but it was a 1-0 game into the fifth when we played them this last time. Tucker Coleman pitched six innings, and then Burton Garneau came in. They ended up beating us 5-1 or 6-1. We beat Westhampton on a walk-off hit by Kody Vela. . . .”

Speaking of the jayvee, Alversa recently brought its cleanup hitter, Jack Dickinson, up to the varsity. The tall eighth grader played third base in the third game with Westhampton Beach and in the nonleaguer with Shoreham.