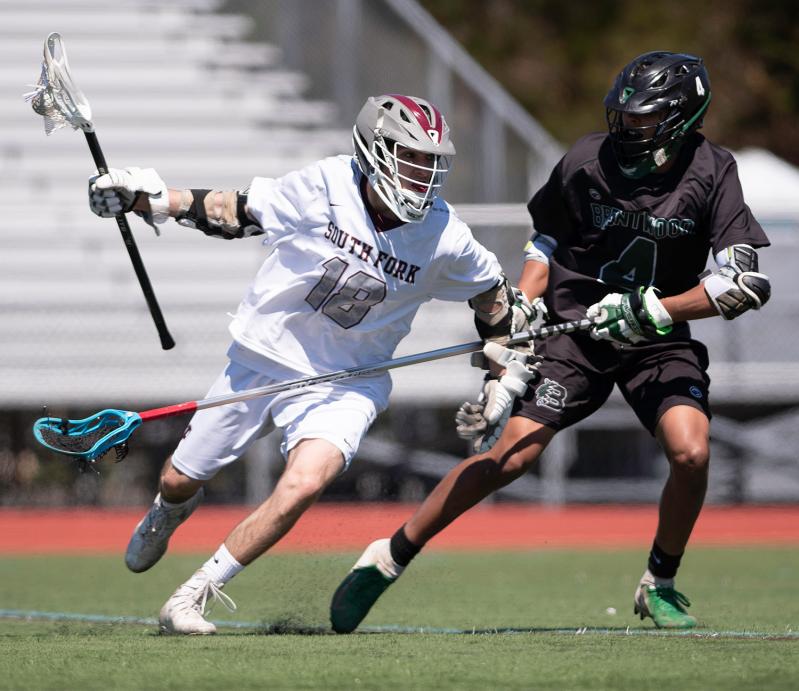 “Undefeated in East Hampton,” one of the South Fork Islanders’ players said after last Thursday’s 9-6 win over Brentwood.It was the first time that the combined boys lacrosse team, coached by Matt Babb of Southampton High, had played here this spring, and it was its second win of the season, Copiague being the other victim (and everyone else’s too).Fittingly, Logan Gurney of East Hampton was the star, with five goals and two assists. “It was his best perfor­mance since we merged,” Babb said of the junior midfielder, who is in his third year on the Islanders’ varsity. Asked what his thoughts were concerning his team’s performance, Babb said, “A win is a win, but we didn’t play to our capabilities — we played down to their level.”Nevertheless, it was an interesting game.The Islanders began it with a shot off the post and one that hit the back of Brentwood’s net. Gurney’s first attempt, about four and a half minutes into the first quarter, was a scoop that sailed way high. Brentwood saw a shot of its own carom off the post 30 seconds later, and then, with the teams all even following a one-minute penalty assessed Brentwood for forechecking, the visitors converted a turnover, bouncing one by Chris Cardel, a defender who was subbing for the absent Hudson Brindle in the Islanders’ goal.The Indians’ defense had been doing a pretty good job of keeping the Islanders far from the crease before Luke Marro, with about three and a half minutes left in the period, faked his man and, from 10 yards out, tied the score at 1-1.Brentwood quickly replied, a fleet defender taking it all the way up the field and beating Cardel following another Islander turnover. “Play your game, not theirs,” Babb was overhead saying to his charges during the break, at which point the Indians led 2-1.Gurney made his presence known when, four minutes into the second quarter, he netted a 25-yarder. The visitors mounted several serious threats in the next three minutes, but failed to cash in. After a timeout, during which Babb again urged his charges to play their game, Brian Damm, also of East Hampton, and Logan Gates scored back to back, from 20 and 30 yards out, treating South Fork to a 4-2 lead. Brentwood tied it up thanks to two glaring defensive lapses when the third period began, and it seemed that the momentum that the Islanders had wrested in the second frame was about to vanish when Gurney stepped up big time, netting three unanswered goals in a four-minute span, the last, his fourth of the afternoon, coming with a minute and a half to go in the period.But still, at 7-4, the game wasn’t out of reach. A breakaway following yet another Islander turnover made it 7-5 before the quarter ended, and a long shot that got by Cardel brought the Indians to 7-6 with 8:46 left to play.Again Gurney came to the rescue, with his fifth goal of the day, a 25-yarder, two minutes later. But it wasn’t until an own goal by a Brentwood defender, whose errant pass intended for a teammate behind the Indians’ goal came to rest in the empty cage with 5:12 left on the clock, that South Fork fans, with their team leading 9-6, began to breathe easier.“It’s good to have a W, but we didn’t play well,” Babb said when questioned afterward. “We were missing some pieces today — our goalie was a converted defenseman — but still. . . .”The 2-10 Islanders were to have played 5-8 Patchogue-Medford yesterday on East Hampton’s turf field.