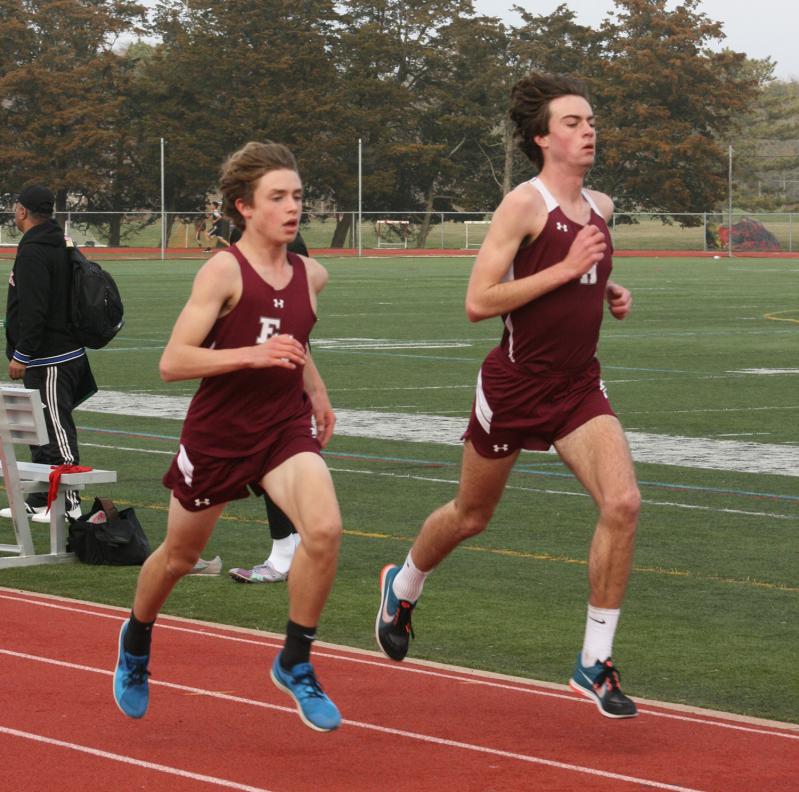 Ryan Fowkes, at right, is a threat at any distance from the 400 on up.
By Jack Graves

The big news in East Hampton High School sports this past week was the fact that Ryan Fowkes, the school’s top distance runner, qualified for the New Balance Outdoor National meet to be held in Greensboro, N.C., in mid-June by winning the 2,000-meter steeplechase race at Port Jefferson’s Steeple Fest Plus on April 23.Fowkes, who is to attend George Washington University on a partial running scholarship in the fall, won the race in 6 minutes and 14.30 seconds. An article in Newsday quoted him as saying, “I definitely came in here with the goal of making nationals and winning the race. . . . I checked both those boxes today, so I’m really happy with myself.” The national qualifying time was 6:15.In March, on the occasion of Fowkes’s signing a letter of intent at the high school to attend George Washington, Kevin Barry, his cross-country coach here, remarked on Fowkes’s range. He holds school indoor records in the 1,000 and 1,600, and, according to his outdoor track coach, Ben Turnbull, has the 1,600-meter outdoor record (4:24:19) as well. Turnbull added that “Another goal of Ryan’s is to go under 4:20 so he can go to states.”“He can run the 400 too,” Barry said at the signing. “Plus, he’s one of the best cross-country runners I’ve ever had.”In qualifying for the national 2,000-meter steeplechase, Fowkes is following in the footsteps of Turnbull, who competed in that event at North Carolina State University 19 years ago.Also at the Port Jefferson meet, Frank Bellucci placed fourth in the 2,000-meter steeplechase in 7:34, Matt Maya was fifth in 8:09, and Devon Merritt was sixth, in 8:45.96. All won medals, Turnbull said. Moreover, Bonac’s Evan Masi won the freshman 2,000-meter steeplechase in 6:59.46, with his teammate, Amari Gordon, second in 7:21.06 — medal-winning performances.In addition, Maya cleared 5 feet 10 inches in the high jump, a personal best in that event for him. On Saturday at the Westhampton Beach invitational meet, Fowkes won the 800 in 2:02.05; Masi ran a 4:57.22 in the 1,600; Bellucci recorded a personal-best 63.67 in the 400-meter intermediate hurdles, and the sprint medley relay team of Merritt (200), Bellucci (200), Maya (400), and Fowkes (800) placed third.As for East Hampton’s girls team, Emma Hren placed third in the freshman 2,000-meter steeplechase, in 8:44.95, and Ava Engstrom placed fifth in that event’s open race, in 7:46.56.At Westhampton, the following had top-10 finishes: Bella Tarbet, sixth in the novice 1,500; Engstrom, ninth in the open 1,500; Hanna Medler, sixth, and Lateshia Peters, ninth, in the 400; Lillie Minskoff, ninth in the open 100; Mimi Fowkes, fourth, and JiJi Kramer, 10th, in the open 1,500-meter racewalk; Marlena Bellucci, eighth in the freshman 100-meter high hurdles; Tarbet, ninth in the open 3,000; Paige Schaefer, 10th in the novice discus, and Bella Espinoza, ninth in the pole vault. East Hampton’s boys and girls teams are to vie tomorrow — the boys at home and the girls away — with their Amityville counterparts. Both teams are to send competitors to the St. Anthony’s invitational Saturday.The news wasn’t so good this past week when it came to baseball, which was shut out 9-0 here Friday by Harborfields in the rubber game of a three-game series. Elian Abreu, who was replaced by Charlie Condon with the score 9-0 in the top of the fifth, started and took the loss. East Hampton hitters were issued six walks and two hitters were hit by pitches, but the Bonackers could not manage a run until Kurt Matthews drove one in in the bottom of the seventh, by which time it had begun to rain heavily. The game, ostensibly because of the mound’s slickness, was called with the bases loaded, none out, and Tucker Genovesi, Bonac’s number-three hitter, at bat. Consequently, the score was rolled back to what it had been, 9-0.The win improved Harborfields to 3-3 and dropped East Hampton to 4-2.