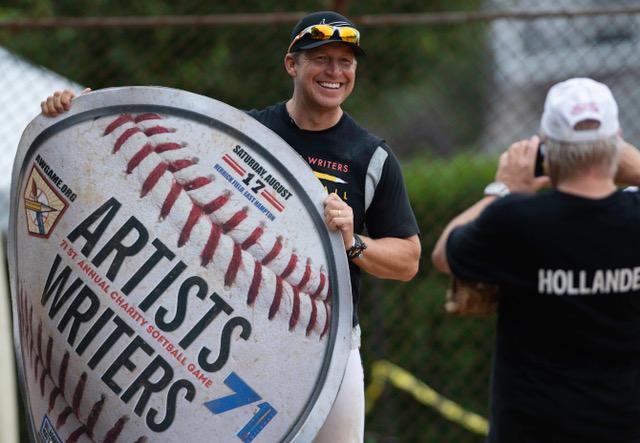 Covid-19 has struck out the 2020 East Hampton Artists and Writers Softball Game.

Originally scheduled for Aug. 15 at Herrick Park, the charity game's organizers have decided it is not yet safe enough to play. The game has been played since 1948, drawing many rosters of well-known players to support local nonprofits.

"We held on to the hope of our having a game for as long as we could," Benito Vila, president of the event's board of directors, said in an announcement. "We're postponing until next year. Maybe then, we'll play two."

The annual event is a fund-raiser for four nonprofits that serve the community, the Eleanor Whitmore Early Childhood Center, the Retreat, East End Hospice, and Phoenix House. In lieu of nine innings of actual play, there is now an online competition between the Artists and the Writers to see who can raise more money. The collective goal is to meet or exceed $30,000.

"Those essential service providers have each seen an uptick in demand for services as the East End copes with the immediacy of child care, domestic violence, drug abuse, and death during the pandemic," the Artists and Writers organization said in a statement. The winning side will be the home team in 2021, when the Artists and Writers game is set to return.

"No one will miss the 2020 Artists vs. Writers Game more than Ken Auletta and I will," Mike Lupica, a sportswriter and novelist who is the Writers' second-baseman and leadoff hitter, wrote in an email. "Each of us has been a part of it for 40 years. We love the whole day, from the time we show up for batting practice until the first postgame beer at Dopo, and even our annual Sunday morning phone call replaying the game over the phone. We love the money we've raised over the years for our charities and the friends of the game who keep coming back year after year. We've never once taken for granted the place we held in East End summers, on our traditional middle Saturday in August. So we come back bigger and better in 2021."