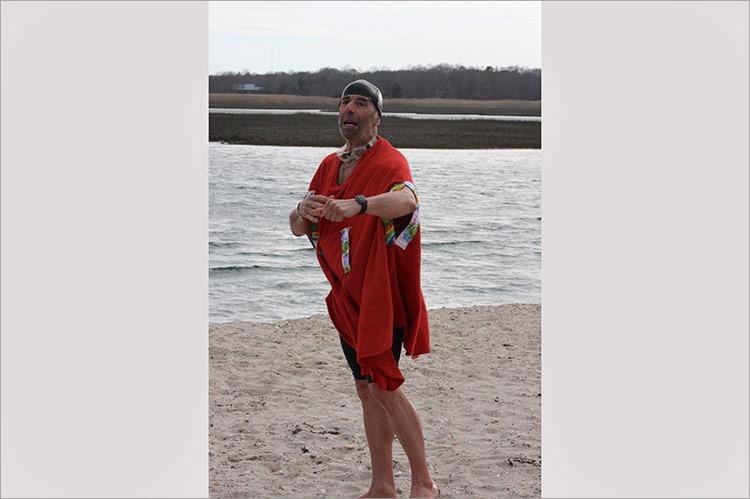 Spencer Schneider after a bracing half-mile turn in the 50-degree waters off Louse Point in Springs.
Jack Graves
By Jack Graves

As they have done throughout the winter, Heather Caputo, Spencer Schneider, and Mike Bottini dived, one by one, into the 50-degree water at Louse Point in Springs on a recent Sunday afternoon and swam about a half-mile, emerging onto the beach in a pleasantly benumbed state about 12 and a half minutes later.

This was the third winter that these three, and Jeremy Grosvenor, who had earlier that day swum with Mr. Schneider off Mile Hill Road in Northwest, have been swimming three or four times a week at various spots in the ocean and in the bay — the bay being the colder of the two in wintertime and the warmer body of water in the summer.

When this writer said during a telephone conversation with Mr. Schneider last month that he trusted news of their activity would not impel legions of others to follow their lead during the coronavirus quarantine, Mr. Schneider, who first learned of cold water swimming through Paul Frediani’s Facebook postings “seven or so years ago,” said he doubted it.

Moreover, he said, safety, which included proper distancing in and out of the water, was their primary concern — all four of the aforementioned are lifeguards, and Mr. Bottini and Ms. Caputo are, in addition, members of the East Hampton Village Ocean Rescue squad.

“We always swim with someone else, or, in those very rare times when we swim solo, we’ve got someone else watching,” said Mr. Schneider, whose long-distance credits include swims spanning Ditch Plain and Lazy Point, Cedar Point and Gardiner’s Island, Cedar Point and Orient Point, a circumnatation of Robins Island, and a Montauk Point to Block Island attempt three and a half years ago that, because of encroaching hypothermia, he had to abandon somewhat more than halfway there.

He would give the latter test, which can, among other things, be taxing because of the need to properly time the tides, another go in the near future, with Mica Marder as his pilot.

When asked what it was about cold water swimming, Mr. Schneider said, “I love it! You get more bang for your buck — you get such an endorphin rush, about what you might get in an hour-and-a-half workout on the land. . . . Oddly, you’re not cold when you get out. Your body’s adjusted to it a little bit. You’re numb, but it’s not a numbness that causes any concern. You’re elated. You saw how we were when we got out at Louse Point.”

Again, he said, “We observe the proper social distancing — we don’t stand around and talk. We put our things on and get back into our vehicles. I don’t want people to get the idea we’re congregating on the beach. . . . We’re careful. The whole sport of cold water swimming is about safety — it’s . . . I don’t want to say dangerous . . . it’s risky.”

Asked about Ms. Caputo, who from Feb. 29 to March 1 competed, along with Mr. Grosvenor, in the Memphremagog Winter Swim Festival in Vermont’s Northeast Kingdom, Mr. Schneider said, “She’s amazing. Two days ago, she swam a mile at Long Beach in 32 minutes.”

In a telephone conversation in early March, Mr. Grosvenor said of the meet, “It was a whole new dimension . . . a giant frozen lake 30 miles long. It means ‘expanse of water’ in Algonquian. They used chain saws to cut a two-lane pool through two and a half feet of ice. It reminded me of something I didn’t know, if you know what I mean. It was so cold. It was so cold you didn’t feel cold anymore.”

Nothing untoward had happened, he added, “though some guys, seasoned cold water swimmers — there were people there who had swum the English Channel, who had done the Catalina crossing — had to get out, in the 100 and 200.”

“The worst part was getting in,” said Ms. Caputo. “I’ve done the New Year’s Day Polar Bear Plunges for years, but this was a lot colder. The plunges aren’t even a challenge anymore.”

All in all, she said, “there were 93 competitors — from all over the U.S. and from Canada. They were all open competitions. One girl was 15. Some were in their 70s.”

“I didn’t spend that much time talking to people afterward,” said Ms. Caputo, who had to get back to her 6-year-old daughter, Annabelle. “She’s a good swimmer. I’m trying to encourage her to do cold water swimming, but she’s saying, ‘No, no, no!’ ”