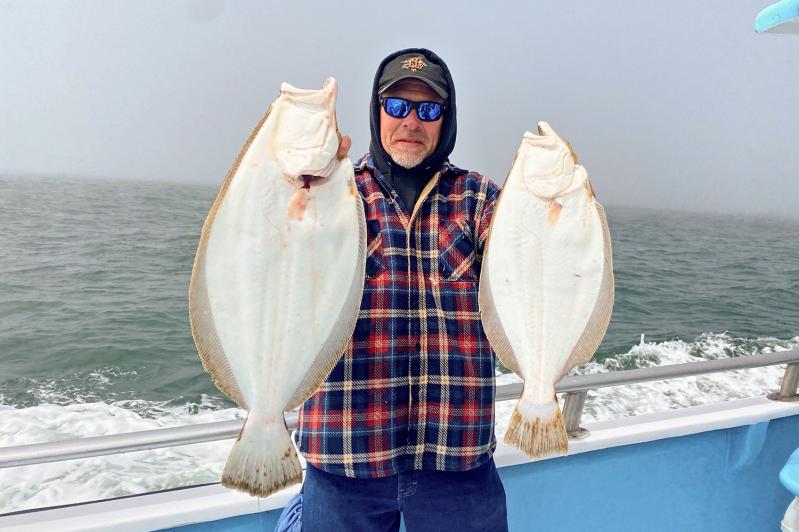 Steve Maniuszko caught these two fluke on Sunday morning aboard the Lazybones out of Montauk.
Capt. Michael Vegessi
By Jon M. Diat

On Friday afternoon, while returning to Sag Harbor from an overnight trip to Manhattan, I stopped at the Mobil station in Manorville, as I needed to fill up the gas tank of my Jeep Wrangler. While I wanted to get home as quickly as possible, it was a good time to stretch my legs and take a quick break.

The respite from sitting behind the wheel was especially welcomed after dealing with extensive traffic caused by road construction all along the Long Island Expressway on my excursion eastward. It was awful.

Those who have recently experienced the minefield of potholes and lunar-size craters that populate the L.I.E. know exactly what I’m referring to. The road is a mess.

While waiting in line at the multilane fuel station, I took casual notice of the cost of regular gas. It was $4.69 per gallon. When I was there two weeks ago, it was $3.95. Ouch.

The following morning, I prepared myself mentally (and financially), as I motored over to the nearby Sag Harbor Yacht Club dock to get some diesel fuel for my boat. In mid-November last year, I wisely filled up my twin 90-gallon tanks before she was pulled out of the water, when fuel cost much less.

While not cheap, the dockside price I paid back then was $4.55 a gallon. However, I was now running on fumes, mainly as a result of weekly trips to check on my lobster traps that I dropped in the water in late March.

Safely tied up, I turned off my engine. The sign atop the diesel pump on the dock was $6.75. Ouch, again.

“Yikes!” I exclaimed to Ray Sperling, my longtime deckhand, whose main responsibility, beyond friendship, is to help clean and rebait my strings of lobster traps. “This fill-up is going to be epic.”

Ray muttered a colorful expletive in response that cannot be noted in print. I readily agreed with his censored comment. Much like everyone else who has fueled up, whether on land or water, we felt the pain at the pump.

But with diesel fuel, what’s particularly tough to swallow is that diesel is generally simpler to refine from petroleum than gasoline. As such, it should cost less to buy. But in the current wacky inflationary world, the demand for diesel is intense worldwide, and as a result, the price has skyrocketed.

According to the Department of Energy Information Administration, the retail price of gasoline is up 29 percent from the start of the year — but diesel has increased nearly 46 percent. No matter the bluntness of hard statistics, I had to pay the price.

I ended up filling my tanks with just over 130 gallons of diesel. It was quite a pinch to the pocket, but nobody with a boat has ever been fooled into believing that this is a low-cost hobby. Most important, it felt great to be on the water and not the L.I.E.

Dense, foggy conditions over the weekend caused some anxiety for boaters and fishermen alike. However, the fishing was good in many locales, as the waters continue to warm up.

“Bluefish have come in big time,” Sebastian Gorgone at Mrs. Sam’s Bait and Tackle in East Hampton said with a smile. He said that the best action has been at Gerard Drive and Accabonac, with small diamond jigs and poppers being the lures of choice. He added that striped bass have also been mixed in with the blues.

“Weakfish and porgies have also been good to the west in Noyac Bay and near Jessup’s Neck,” he said. “Plus, the action along the ocean beaches remains solid for striped bass. Anglers have plenty of options to choose from now.”

“Fishing has been really good for striped bass, weakfish, and porgies in the bays,” said Ken Morse at Tight Lines Tackle in Sag Harbor. “Jessup’s Neck has been hot for all of the above, but large striped bass up to 42 inches have been taken by trollers in the South Ferry area, even in the middle of the day too.” Note that anglers can only retain one bass between 28 and 35 inches per day.

Morse did lament that bluefish are still scarce locally, but confirmed that they are thick to the east at Gerard Drive. He also noted that fluke fishing has been poor at best. “But there has been a worm hatch in Sag Harbor Cove, and the fishing from the shoreline has been excellent. It’s been silly fishing at times,” he added.

Morse recently received a full shipment of Fishbites, a new artificial scented bait that rivals Berkley’s popular line of Gulp! products. “Many anglers prefer Fishbites, as it is much longer lasting,” he observed. “This product is really going to be stiff competition for Gulp!”

Over at Westlake Marina in Montauk, Tonya Miller said that the fishing scene is still waking up. “Still not many boats are in the water yet,” she said. “Those that are in are catching some striped bass on diamond jigs, with a few keepers mixing in.” She added that the fluke bite has been picky, but that it should improve with better weather over the next few weeks.