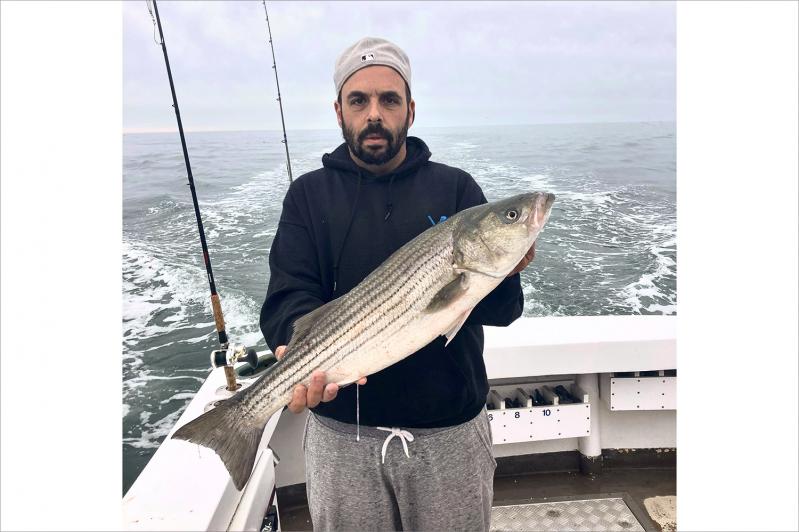 Last Thursday afternoon, while on the way to check on my lobster traps settled to the northeast of my dock, Gardiner’s Bay was flat calm. Given how windy it has been this spring, it was by any measure a good time to be on the water and take advantage of the rare conditions. It’s never fun taking a beating when the wind and seas are up.

The benign conditions that bright warm day also reminded me of the iconic Elton John song “A Candle in the Wind,” one of my longtime favorites, written by his longtime lyricist Bernie Taupin. The light wisp of air that surrounded us on the lobster grounds could barely blow out a candle.

I could envision Marilyn Monroe, the larger-than-life blond bombshell that the song pays homage to, standing dockside, gently waving her hand, and perhaps blowing a kiss, as we sailed off. Goodbye, Norma Jeane.

On a side note of local lore, Monroe said that her days in Amagansett, where she lived for a time when she was married to acclaimed playwright Arthur Miller, were the happiest in her short life.

The final verse of the song eloquently expresses the simple yet sad truth of her life nearly 50 years after it was first pressed on vinyl: “Your candle burned out long before your legend ever did.”

Returning to the local fishing scene, sadly the stillness of Thursday was short-lived, as gale-force winds commenced by Friday evening. The northeasterly blow put a complete damper on all fishing efforts. In fact, the winds did not relent until late yesterday. Five long days of such conditions.

It was unfortunate, as the action on porgies, fluke, striped bass, weakfish, and even squid was on the upswing in many locations. It will take a bit of time for the harbors, bays, and especially the ocean to settle down and clear up.

I am also curious as to how my lobster traps held up during the extended gale. Given the wave action and strong tides where I set my gear, I have no doubt that some may have been displaced or lost for good. At almost $100 a trap, my next trip out could prove to be rather costly.

“Yeah, the weekend was a total bust,” observed Ken Morse at Tight Lines Tackle in Sag Harbor. “Before the blow, there was really good action along the ocean beaches for striped bass, as well as in the bays. Porgy fishing was also continuing to improve too.”

Over at Mrs. Sam’s Bait and Tackle in East Hampton, the owner Sebastian Gorgone agreed with Morse on the lack of fishable weather over the weekend. “The weather and winds were terrible, but things should bounce back nicely when the winds slack off.” Gorgone noted that the pound traps tended by commercial fishermen in the local bays have had a nice influx of porgies, squid, striped bass, and blowfish coming up in their nets.

“Some bluefish are also around, and there are some small striped bass being taken in Three Mile Harbor as well,” he added.

Out at Montauk, Capt. Hugh Chancey of Chancey Charters, got out early on Friday and while rounding the Lighthouse, noticed a large grouping of seagulls working on a school of fish. With diamond jigs at the ready, Chancey put his charter on over 20 striped bass, with one being a keeper. He then made a few drifts for fluke, landing one that was legal-size, as well as some shorts.

Capt. Steven Forsberg Sr. of the 140-foot Viking Starship, also took advantage of the calm before the storm late last week on the Starship’s maiden offshore trip of the season.

The captain said that Thursday morning started out windy (what else is new?), with small dogfish mixed in with some tilefish. However, once the weather chilled out, the fishing turned around in a big way.

“We had golden tile, blueline tile and hake coming over the rails for the remainder of the day, making for a successful catch,” the seasoned skipper noted. “Day two started out good and got better and better. We also found some barrelfish and caught a load up to 27 pounds.”

“All in all, it was a very good trip,” he added. “It was a great start to the 2022 offshore season.” The captain noted that some spots at the rail are still available for the next two-day trip departing on May 20. Let’s hope the winds will not be an issue.