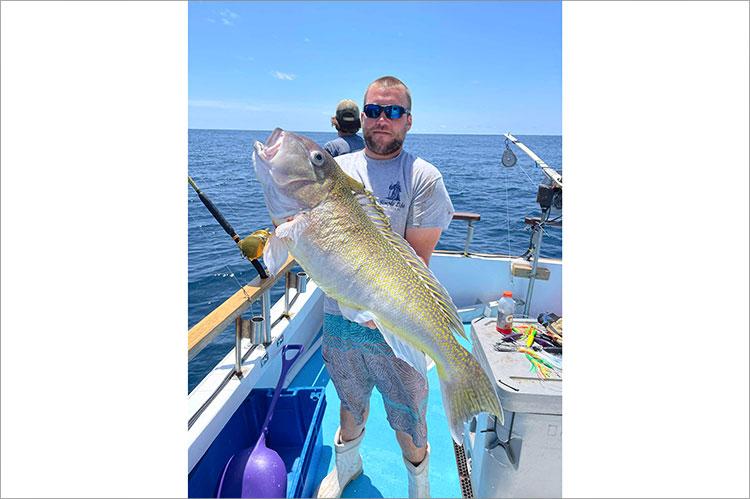 Capt. Tyler Quarasemo of the Montauk charter boat Simple Life went to the deep on a recent trip and landed this large tilefish.
By Jon M. Diat

It was a bit before 6 a.m. last Friday, a steamy morning that felt more akin to tropical climes along the docks that surround Montauk Harbor.

With nary a breath of wind on the calm harbor, the give and take of laughter and small talk among the throng of anglers waiting on other vessels to go out to sea could easily be overheard from all directions. Seagulls flew about looking for a free meal. There was life everywhere.

It was also readily apparent that the day ahead was going to be a hot one, even if the 72-degree water of the incoming tide outside the nearby breakwater seemed cool to the touch. Nevertheless, the search for codfish, normally associated with much colder waters well to the north, was on the agenda that day for our charter group of six.

Cod, which can mature to over 100 pounds (although today, cod over 50 pounds are very rare), are a fish that probably constitutes the most important fishery in history, with nary another competitor for the title in sight. The lore of the codfish is legendary. To this day, its white, flaky flesh is still highly prized by many countries and cultures. Its catches have been in a steady decline for many decades, but for those in the know locally, cod can still be had with a rod and reel.

Eddie Harrison, the longtime mate of the Breakaway, a 42-foot Torres charter boat, helped me and my fellow shipmates stow our assortment of fishing rods, coolers, and cumbersome duffel bags we had brought aboard for the full-day trip ahead of us. While he did not say it, I'm sure he thought we had enough belongings for a weeklong trip. Harrison, who formerly stood on deck aboard various trawler boats, unfortunately lost a finger working in such an overly dangerous occupation. It was not our intention that day to do him any further harm.

He got us settled aboard, as our skipper, Capt. Richard Etzel, revved up the large Cummins diesel engine. With the air-conditioner on full blast in the main cabin, it was time to untie the dock lines.

"The reports on cod have been dismal from some very reliable sources," he said to me from the bridge of his helm station high above us. Etzel was referring to Cox's Ledge, a broad, elevated formation of rocks and reefs 30 to 40 miles southeast of our current location. Coxes has been a long-favored haunt of cod for many decades, but the catches of late, or even the past decade or so, have been elusive at best. We now had to modify our trip on the fly.

Etzel, a full-time fisherman, has knack for knowing where the fish are. He's one of the finest in Montauk. We attended the same high school in Nassau County, although we did not graduate in the same class. Our paths ultimately crossed almost 35 years ago, and our bond is strong to this day.

"We'll head east past the windmills and check out various spots," he said of the Block Island Wind Farm, five wind turbines located three miles southeast of the island. "If the fishing is tough, we can head back west and go for sea bass and fluke."

Just over 90 minutes later, we arrived at our first location. It was time to bait up with skimmer clams for our high-low rigs that were affixed to a 10-ounce bank sinker. The light winds also made it possible to drift, rather than anchor up, giving us more ground to cover.

Within a few minutes, I hooked into a small whiting, that was safely released. Much like cod, the silver-sided fish have been in a steep decline for decades, although it appears their stocks have been on the rise lately. A minute later, a cod was hooked and brought aboard the starboard side.

"I don't know, but I think it's probably a short," predicted Harrison, as he laid the fish across a tape measure on his bait board. "Sure enough, it's 21 inches. Back you go." Cod need to be at least 22 inches to be retained. The hooks were rebaited with a slice of skimmer and returned to the bottom.

"The price of clams is out of hand," noted Etzel, bewildered by our choice of bait -- a bucket of shucked clams that now nears $100 a bushel. The old economic rule of supply and demand has certainly played a part in its price increase; someone along the supply chain is seemingly making a lot of clams on clams.

A drift later, we caught our first keeper of the day, a fish close to 24 inches. The bite would be intermittent for the next few hours, and we caught a few more legal-size fish, but not enough to make it a full-day's effort. Capt. Etzel then brought us closer to the windmills for some sea bass.

The action was instantaneous, with a number of nice size fish up to four pounds landed. It didn't take long for all of us to get our three fish limits. On Sept. 1, anglers will be able to retain seven fish.

While the cod fishing could have been a bit better, we all returned with plenty of fish for several dinners. Most important, good friends enjoyed a day on the water together. The smiles and memories were plentiful.

Elsewhere, the local fishing action remains consistent. "Lots of porgies around and the snappers are getting bigger by the day," said Harvey Bennett at the Tackle Shop in Amagansett. "The striped bass fishing has slowed down at Montauk, but there are still some fish for those casting from the ocean beaches. Fluking is good on the south side and some fish are still coming out of the Napeague area."