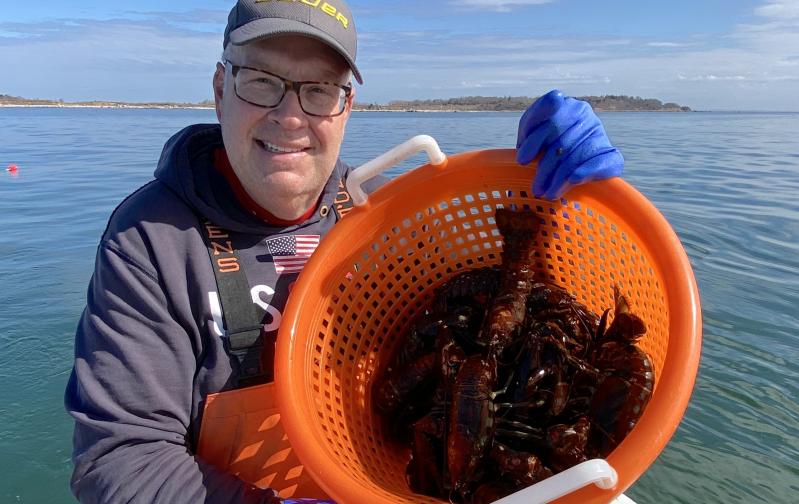 Lobster catches in local waters have been good so far this season.
Terie Diat
By Jon M. Diat

I'm not sure if I subscribe to all of the aforementioned words of wisdom, but I can pretty much guarantee that most fishermen and sailors are weather junkies. It's no surprise really, as weather conditions will always play a role, big or small, on any given day on the water.

Is it too windy to head offshore? Will it be too calm to have a decent drift to catch sharks? Are afternoon thunderstorms going to interfere with a family outing for porgies or a simple sail in the Sunfish? The list of potential weather-related issues or concerns are as long as an endless debate in a heavily divided session of Congress.

Checking my iPhone the other day, I counted that I have nearly 25 different apps that follow weather, winds, and tides. Showing my age, I'm also in possession of a 25-year-old weather radio from Radio Shack that I keep in my bathroom and listen to every day.

It sounds like overkill, and it probably is. I admit that such an abundance of information can easily overload my brain when finalizing a decision on boating plans. Too much information can be as much a detriment as too little.

While I don't depend on a single definitive source for my information, I was heartened to read a few weeks ago that the National Weather Service announced that it was fine-tuning its marine forecasts for eastern Long Island. It was much welcomed news for us app-happy boating weatherites.

In short, the service has created a new marine forecast zone that encompasses a rectangular-like area from the east end of Connecticut to Montauk Point, to Orient Point, and finally to the mouth of the Connecticut River. The more concise forecast area will better capture current and future wind and sea conditions within those heavily trafficked waters, as the old forecast zone included a broad area of the Long Island Sound westward all the way to New Haven.

I've already relied on the new forecasts on recent trips to check on my lobster traps (catches have been decent). While I doubt I will eliminate any of the apps on my iPhone, nor ditch my antique radio, I do feel good to add one more reliable authority to my extensive library of sources.

So, will this weekend be fishable? It all depends on who you listen to or ask.

Fishing reports remain scarce, as anglers continue to look forward to May, when the fluke season opens up on the fourth. Those jumbo Peconic Bay porgies will also be on the menu at that time. While anglers can now retain one striped bass between 28 and 35 inches per day, the main body of fish is still a few weeks away. However, commercial fishermen in the Peconics have taken a few early arriving weakfish, along with loads of bunker, in some pound nets -- a good harbinger of better days ahead.

"We should have all of our pound traps fishing by April 28," Danny Lester said on Sunday evening. The Amagansett bayman was speaking of the centuries-old form of catching fish with a leader net that is suspended from a series of poles that run perpendicular to the shoreline, sometimes for several hundred feet out to deeper water. The seasoned bayman expects to fish eight traps this season that span from Gardiner's Bay to Fort Pond Bay in Montauk. "The draggers are starting to land some fish on the backside of Montauk and it usually takes about two weeks for the fish to show up in any quantities in our area."

"A few fluke have already begun to be caught by some draggers on the south side of Montauk," confirmed Wes Peterson of Peterson's Seafood Market in downtown Montauk. "They are getting some squid, porgies, and a few sea bass too."

Having worked on lobster boats and draggers since he was 10, Peterson opened up his new shop on South Etna Avenue a few months ago. On Saturday, the Peterson's display case featured a beautiful array of fresh fish and shellfish, many of which were locally sourced, including sea scallops, clams, tilefish, porgy, Jonah crab, flounder, cod, and even white perch caught from Mecox Bay.

"We deal with many of the local boats for our products," he said from behind his stainless-steel counter. "I'm a big believer in trying to have the best from our local waters."

"We're getting ready to start fishing," said Capt. Michael Vegessi, the longtime skipper of the popular Montauk open boat the Lazybones. "The fluke season opens up on May 4, but we have our annual Coast Guard inspection that day. As such, we will start on Friday the seventh. I hope it will be a good start."

And fingers crossed for good weather, too.