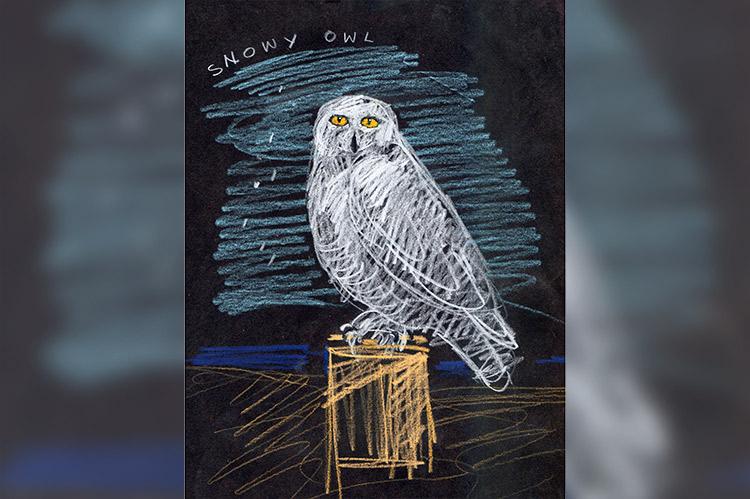 If a snowy owl notices you, you’re too close.
Durell Godfrey
By Christopher Gangemi

The first time I saw a snowy owl I thought it was a discarded bleach bottle.

I was in the Napeague Walking Dunes and had just entered a cranberry bog. Atop a distant mound was a white blob. Clorox bottle. “Man, people are the worst,” I thought. I walked over to retrieve it and then watched in awe as it lifted off the dune and flew away. Not bleach.

This type of story apparently isn’t so odd. Jane Bimson, who also works for this paper, said she was walking near Navy Beach in Montauk when she mistook a snowy owl for a plastic bag.

It seems ironic that this bird — which comes from the world above and is pure white with golden eyes, a bird that the poet Mary Oliver says is full of “depths of light,” a bird that attracts Instagrammers the way the Hamptons attracts Range Rovers in the summer — is so easily confused with garbage. But no one would confuse a snowy owl for a “trash bird.” That term is reserved for the house sparrows and rock doves of the world.

Never for the snowy owl.

No, snowies are revered. People talk about the snowies in the winter the way they talk about the whales in the summer. They seem to enrapture us, to grasp our imagination. They offer us a glimpse of some world of which we can barely conceive.

According to John Bull’s, “Birds of New York State,” in the winter of 1926-27, the greatest Long Island flight on record (until the flight of 2013-14), 40 snowies were killed on Fishers Island in November and December. A single taxidermist received 36 additional birds from eastern Long Island. Hunters shot eight in Nassau County, and 75 more elsewhere in the New York City region.

That’s a lot of dead owls. Ornaments for the mantel.

We no longer shoot snowies: In 1960 they were finally protected by state law. However, we do disturb them often.

If you are lucky enough to encounter one of these visitors from the north, the number-one rule is to simply keep your distance. Respect the owl. According to Project SNOWstorm, a group dedicated to protecting and conserving snowy owls, owls that visit us in the winter tend to be juvenile birds. You’ll know you’re looking at a juvenile if it has dark, horizontal bars across its wings and body. They are used to the Arctic and being new birds are especially naive around humans.

“We see a huge disparity in the movement patterns of snowies in places like public beaches, where there is a lot of human disturbance, and locations like closed refuge lands or inaccessible back-bay areas with no people,” Scott Weidensaul, an author and founder of Project SNOWstorm, wrote in an email. “Owls in accessible spots get flushed again and again and again all day long. Those in inaccessible areas basically stay put all day.”

When you see a snowy owl out here, you are seeing a wintering bird. You won’t find its nest. They nest up in the Arctic tundra, a flat, treeless, and permanently frozen region. That’s why our dunes, bordered by the endless, flat, blue-gray ocean, appeal to wintering snowy owls. They’re reminded of home.

They’d be more reminded, perhaps, if they could blot out the green squares of irrigated sod, unintentionally ironic “infinity pools,” and other bizarre landscaping details on what once were our barrier beaches. Trees, structures, and cars are all foreign to the snowy owl.

Snowy owls eat rats, pigeons, mice, and even gulls or ducks. Interestingly, according to tracking data from Project SNOWstorm, they hunt over the open water, especially during their winters on the South Fork. They are considered a vulnerable species, with an estimated worldwide population of 28,000. That said, according to Mr. Weidensaul, “it is very difficult to estimate their population.” Why? Because they’re a “highly nomadic species that nests in a part of the world with few or no people.” Their human-sparse and inhospitable environment is very difficult and expensive for us to explore and monitor.

So let’s make a deal: First, if you’re taking a walk on the beach, always leash your dog. Remember, you are in a habitat. Second, if you’re lucky enough to see a snowy owl this holiday weekend and you get tempted to pull out your camera and take a picture, try this instead: Take a step back. Put your camera down and just look at the owl.

Take a breath and think about how lucky you are to be sharing a moment with it, this creature from the northern otherworld. How odd to be in its presence. This tundra bird and you, together. Here you are with this silly device trying to capture a feeling that doesn’t transfer to film, or Instagram. Turn around and look at the impossibly vast ocean. Be with the owl in its world, if only for a few moments.

Also, try this: See if you can get through a day without telling everyone about the owl. Just keep it like a secret between you and the owl. Between you and this white bird from the north that you’ve allowed to take a much-needed rest.

Then go through your day, feeling awed and full of snow.

Learn more about this bird at

projectsnowstorm.org. Note that thanks to Durell Godfrey’s beautiful snowy sketch, none were disturbed for this column.

Ever think a snowy owl was a piece of trash? I’m interested in your bird sightings, common and uncommon. Strange stories, normal stories. If they relate to birds, their behavior, or awareness in general, please drop me a line at [email protected].