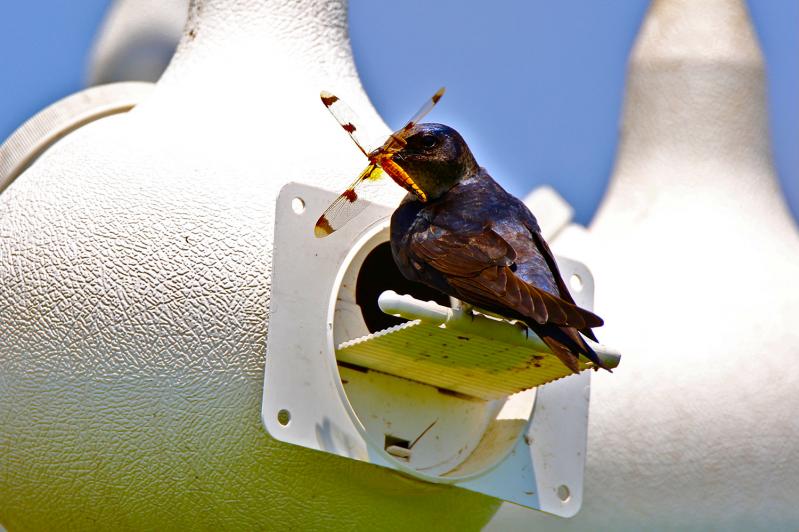 “I’ve been a purple martin fan since basically age 1,” said John Shemilt, the steward for the purple martin gourds behind the South Fork Natural History Museum in Bridgehampton.

“My grandfather had colonies on the shore of Lake Huron and I used to spend my summers with him. I slept on the couch in front of this big picture window and just outside the window was this purple martin colony and it was just a source of endless interest,” he said.

“We’re very fortunate that John volunteers his time to monitor the colony,” said Frank Quevedo, the executive director at SoFo. “He came to us 10 years ago when the colony was first starting and said he’d love to help ensure its success. Because of his stewardship, the colony has thrived. He also reports all its data to the Purple Martin Association.”

This year the museum has 32 gourds up. “Thirty-one have active nests with eggs or are busy building nests and I expect will have eggs,” said Mr. Shemilt. In the eastern United States, purple martins rely completely on humans for their housing needs.

As long ago as 1936, when T. Gilbert Pearson published “Birds of America,” martins were almost exclusively dependent on man-made housing. He even noted that “The Indians of the South encouraged the birds to come about their fields by putting up gourds for their accommodation.” John Bull, in “Birds of New York State,” wrote, “In prehistoric times the purple martin undoubtedly bred in hollow trees.”

Purple martins are our largest swallows. The males are uniformly dark and appear simply black when seen in flight against the sky. If the light hits them right, or if you’re close enough, you can separate the deep purple feathers on their head and shoulders from the black feathers of their wings. Females have dark gray wings and head, a white belly, and sooty gray collars and throats.

The colony at SoFo is one of eight on the South Fork and it’s full of intrigue and activity. The martins are always coming and going. Some birds stay with the gourds, while others fly off, circling above to forage, as yet others return.

Sometimes you will see them coasting toward the gourds from a distance, coming in for a landing. Tails flared, letting the air do the work of holding them up, they silently alight on a landing in front of a gourd. Other times they are fluttering above in a perfect arc. Perhaps as you watch, one encounters an insect, and the perfect arc gains a quick jagged edge as the martin hawks the insect in flight.

All the while the sky is a steady backdrop above. To look at these birds means to look at the sky because they’re part of it.

Their conversation never ends. Close your eyes and just listen to them. You’ll hear a sweet burbling whistle, zip zaps, a rolling trill, bill snaps, and then sudden silence, most likely invaded by the sound of a car rolling behind on the Bridgehampton-Sag Harbor Turnpike. If you’re lucky, you forget the road even existed for a moment.

You can also witness moments of tenderness between these birds. On a recent weekend, I watched as two martins, one inside a gourd and one on the landing, stared into each other’s eyes with what had to be affection.

Purple martins arrive in early April, “as early as the third and as late as the 13th,” said Mr. Shemilt. “It’s very weather-dependent.” The older birds are the first to arrive, “they claim the box they were in last year,” he said. Nesting gourd competition can be fierce.

There’s “quite a bit of mortality” in early April and even into May, due to cold snaps. The birds simply starve when inclement weather hits, because there’s not enough insect activity to sustain them. “Their prime target is a dragonfly,” said

Mr. Shemilt, but they eat a variety of insects, even butterflies.

“Last year we lost six females,” he said. “But we had an exceptional spring this year,” with only one mortality, a record.

The first egg was laid by a martin in the SoFo colony about three weeks ago. Mr. Shemilt expected the first hatching early this month. Hatchings will continue through June, and by mid-July they begin to fledge. “Once they’re all up and flying they just basically leave. We go from a cacophony of sound to silence in short order,” he said.

They then “school up” with other colonies and form roosts before their long migration across the Gulf of Mexico, back to South America. “There was a roost at Mecox for a couple of years, but they stopped using it. I don’t know why. You used to see them on the power line of the causeway there,” he said. Last year over 100,000 caused quite a stir when they roosted in Nashville during their autumn migration.

Go soon. By Labor Day these birds will be absent on the East End and “By the end of October,” said Mr. Shemilt, “there’s not a single martin left in North America.”

Do you have the right habitat to support a purple martin colony? These birds need an open space, like fields or over water. The optimal placement of a house is 90 feet from a residence, according to Mr. Shemilt. Be warned, other birds will often move in, and it may take years for the martins to use your house, if they find it at all. The houses are attractive in their own right, however. Legend has it that the famous naturalist John James Audubon would only stay at an inn if it had a martin house outside.

On Saturday, June 25, you can meet the martins with Mr. Shemilt at the South Fork Natural History Museum. He will lower the gourds and give program participants an opportunity to hold a just-hatched nestling. For non-members the program fee is $15 for adults and $10 for children. It is free for members. To register, email [email protected] or call 631-537-9735.

More about purple martins can be found at purplemartin.org.