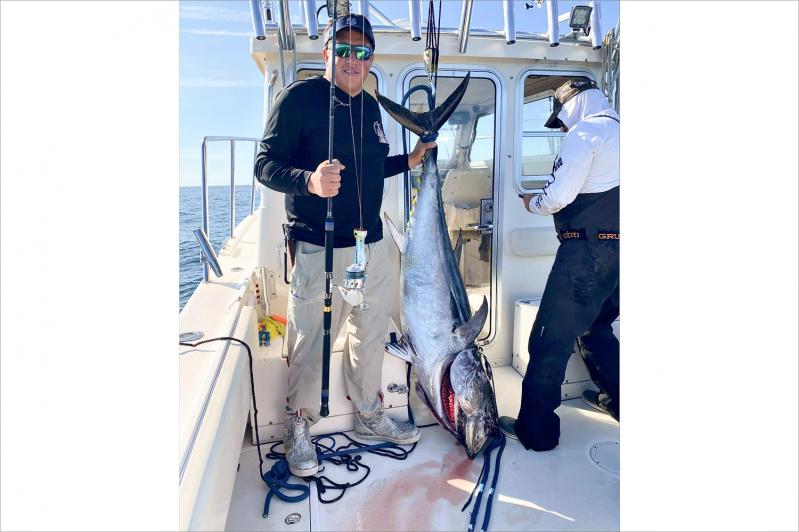 Chris Albronda landed this bluefin tuna on a popping plug in a recent trip aboard the Reel Addiction, a Montauk charter boat. 
Chris Brown
By Jon M. Diat

On Father’s Day, I was supposed to take Alex Fausto and his two young daughters, Sofia, 10, and Emilia, 8, out for a morning of fishing on my boat. It was a trip that I truly looked forward to.

Fausto, whom I’ve known for decades, has been the longtime manager of the Seafood Shop in Wainscott, a busy retail establishment on Montauk Highway that’s frequented by those who expect the freshest of fish and other savory edibles that are harvested from the sea.

(On a side note, try the Thai seafood curry soup that’s ladled out hot by Fausto and the team on most days near the checkout counter. It’s an umami-rich blend of an assortment of fish and shrimp, in a not overspicy coconut milk-based foundation, that has been heralded by The New York Times and other media outlets. In short, it’s killer good. But then again, so too are the chowders, bisques, and other prepared goods.)

Despite being around fish just about every day in his job, Fausto, who is originally from Tampico, Mexico, and his girls love to fish. On days off, he can often be found with them casting out a line with a baited hook adorned with a strip of clam in search of porgies at the northern end of Long Wharf in Sag Harbor. The pictures he posts on Facebook of the girls with broad smiles alongside a chunky porgy are priceless.

“Hey, Johnny?” he said to me over two weeks ago when I was in the shop picking up a few items. “When are we going to go fishing? I’m off on Sundays.”

Anyone who has frequented the establishment knows when Fausto is around. His larger-than-life personality, friendly demeanor, and infectious laugh always bring a smile to those he comes in contact with. But most important, he knows his seafood, and will never steer a customer in the wrong direction.

“Okay,” I replied. “Let’s try for this Sunday then.” Unfortunately, the forecast of rain and wind canceled the trip. We agreed to reschedule for Father’s Day morning.

Once again, the weather gods, despite sunny skies, spoiled our plans, as a gusty 30-knot breeze from the northwest would make fishing difficult and downright uncomfortable, especially for his girls. The strong winds were a problem all weekend.

“Next time amigo, gracias,” he smiled at me on Saturday morning at the Sag Harbor Farmers Market, where he was, as usual, entertaining customers and selling fresh fish and shellfish. “Don’t worry, we will get out soon,” he said. “School is now out for the girls, and I’m also now off on most Wednesdays too.”

Fingers crossed the weather will cooperate on our next planned outing.

For those who were able to leave the dock, the epic run of striped bass continued out in the rips off Montauk.

“The fishing has been absolutely spectacular for boaters,” exclaimed Paul Apostolides of Paulie’s Tackle Shop in Montauk. “Every day there have been plenty of bass over 50 pounds caught and released.” The veteran owner said that the stripers have been feeding on large schools of sand eels, squid, and baby porgies. “So long as the bait stays around, so should the bass.”

On the beaches, he said, the fishing has been “pretty good” for bass, and “there are plenty of bluefish just about everywhere for casters to enjoy.” Apostolides added that the fluke bite perked up before the weekend blow and that it should bounce back once the wind abates.

“The striped bass and bluefish action has been phenomenal,” concurred Dave Reutershan at Westlake Marina in Montauk. “It really does not get any better than what we’ve seen the past few weeks. People need to come out and take advantage of it.”

Reutershan added that boaters are doing well with porgies that have been running to over three pounds at times, but he lamented that fluke continue to disappoint many. “To be honest, it’s been just slow so far this season,” he said. “Some boats will get a keeper or two, but it’s been a struggle for many.”

However, Reutershan was enthused that the season for black sea bass finally opens today Anglers are now allowed to retain three fish over 15 inches per day. On Sept. 1, the bag limit increases to seven fish. “There are many sea bass around. It will be nice that they can now be taken,” he said.

“The striped bass fishing in Three Mile Harbor remains excellent, and of course, Montauk,” added Sebastian Gorgone at Mrs. Sam’s Bait and Tackle in East Hampton. He said that while bluefish have thinned out a bit, the porgy bite is still strong for those casting from the shoreline or from a boat. “The fish are nice-sized too,” he added.

Gorgone was also excited to report that large blue-claw crabs have emerged from their deep winter sleep. Those with crab traps in Three Mile Harbor and other creeks and narrows have had excellent catches. I can personally attest to the great run of crabs. The other day in Sag Harbor Cove, I captured well over a dozen in a 24-hour set. Crab cakes are formally on the Diat dinner menu for the next several days.

On a side note, the Montauk Marine Basin is moving forward with its 52nd annual shark tournament that’s scheduled from today through Saturday, albeit with a few modifications. There will be no welcome dinner or awards ceremony (prizes will be handed out individually). In addition, there will be no live captains’ meeting and there will be no blue shark category. The entry fee is $1,000 per boat.

Not to be outdone, the Montauk Surfmasters Spring Shootout striped bass tournament is also under way. Ending on July 10, the popular catch-and-release tourney has an entry fee of $100. Those under 18 can enter for free. Sign-up is online at montauksurfmasters.com or by stopping by Paulie’s Tackle Shop in downtown Montauk. The current leader is Jason Deland with a hefty 40-pound striper.