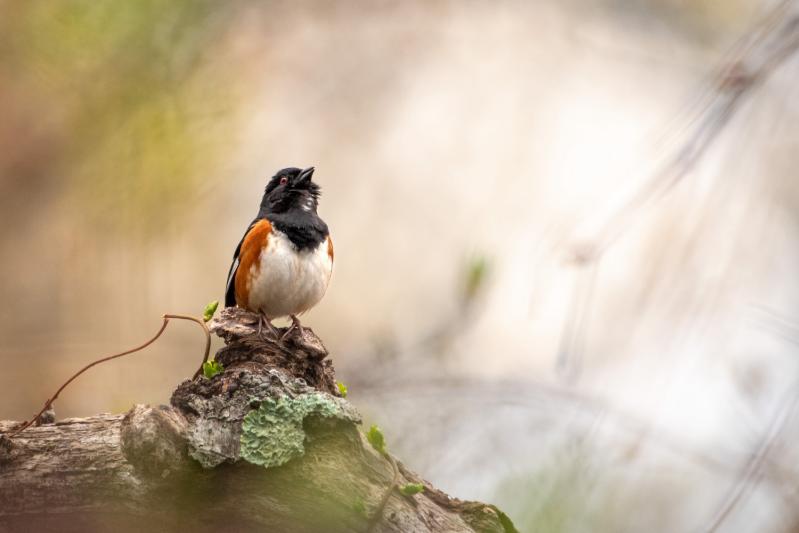 This is the best time of year to see the eastern towhee, because it is breeding and singing, and Montauk is a great place to find it.
Jay Rand
By Christopher Gangemi

I hadn't thought to write about the eastern towhee until I took a walk in Montauk two weeks ago and found myself surrounded by them.

You wouldn't think a robin-size, black-hooded, orange and white bird would be difficult to see, but they're very skulky. They are members of the sparrow family and spend lots of time on the ground under thick brush. They have long tails that show white flashes when they fly. Ornithologists theorize that long tails with strongly contrasting patterns help songbirds flush insects to eat.

Experiencing a bird in its breeding territory is different from seeing it pop up at your feeder or flit through the tops of the trees during migration. Eastern towhees breed in Montauk. You can go there this weekend, walk to Oyster Pond, and hear them calling and singing everywhere. I went there on May 1 and made a conservative count of 30.

If you want to experience this bird, not just "see" it, now is the time.

The towhee shamelessly deploys its ringing and insistent song, stifling in its intensity. It's one of the easier birdsongs to put words to. Most hear "Drink Your Tea!" although I suppose drinkers might hear "Drink Whis-key!" The last syllable ends in a trill, which varies from bird to bird. It was a constant presence on my walk. Every 50 feet or so I would encounter another bird.

Appropriately, a group of towhees is called a teapot. So if you told your friends you encountered a teapot of towhees, you may sound crazy, but you wouldn't be wrong.

Towhees are with us year round, but during non-breeding season, you'll usually encounter only one or two together. Also, instead of singing their breeding song, you're more likely to hear their call note, which to my ear, sounds like a bright "Zreeet!" Apparently, back in the day when everyone was naming birds left and right, someone said it sounded like "towhee" and that stuck. Hence its name.

While the song surrounds you as you walk, you may never see the bird. It has an ability somehow to mask its location when it sings. It can drive you a bit crazy. I have heard a towhee singing from what absolutely must be the bush five feet in front of me only to finally spot it 20 yards away, 15 feet up a tree.

On the East End, we hate leaves on the ground, but towhees love them. They scratch about the understory, using their feet to push leaves around in search of some hidden insect meal. When you hear this scratching, some ancient part of you might warn that a mammal is about to dash out and attack your shin. You may stare at the base of a bush and tell your family to stand back. After many minutes of seeing nothing, you will wave your family forward. They will think you're insane, and that's okay. It's best to keep them guessing.

Towhees will come to feeders given the right habitat, but it's not a habitat generally supported by our local landscaping practices. They like overgrown tangles, impassable places, and a plush, wet carpet of decaying leaves. They even build their nests on the ground, right there in the leaves. It seems risky, but they're such masters of camouflage you probably won't find one. Your dog will, though, which is why it's thoughtful and kind to keep them leashed during breeding season.

Search the internet and you're not going to find a whole heck of a lot on the eastern towhee. They're elusive even there, which is why you should take advantage of Montauk and go hear them this weekend, before they quiet down again.

It's migration, and birds are everywhere. On April 30, Nancy Remkus "came nose to nose" with a hummingbird at her Sag Harbor feeder. It's a good idea to have hummingbird feeders up by mid-April, they show up earlier than you think. On May 6, Miachesca Gangemi reported the return of chimney swifts at Pierson High School. These birds are a definite sign that "the season" is upon us, as they can be heard through the summer patrolling the skies over Sag Harbor Village.

Also, in Sag Harbor, Myles Stokowski reported a solid flight of warblers at Mulvihill Preserve. He counted eight species the morning of May 6, including migrant magnolia, black-throated blue, and black-throated green warblers. Later the same day, at Georgica Cove Hollow, Steve Biasetti reported 16 least sandpiper feeding on the mudflats and a flyby Caspian tern. Anthony Collerton had three Baltimore orioles at his Northwest property on May 6. On May 8, Jill Musnicki had a pair of Eastern kingbirds in her Sag Harbor backyard. Tuesday morning, John Todaro, while enjoying his morning coffee at his house in Northwest Woods, listened to a Nashville warbler sing to him from a nearby rhododendron bush.

Everything is in flux. This Saturday is the eBird Global Big Day. Go to ebird.org for details about how to participate. It's free. Listen for bird songs that sound unfamiliar. The Merlin Bird ID app can help you identify them. As always, send bird sightings to [email protected]. Enjoy migration!