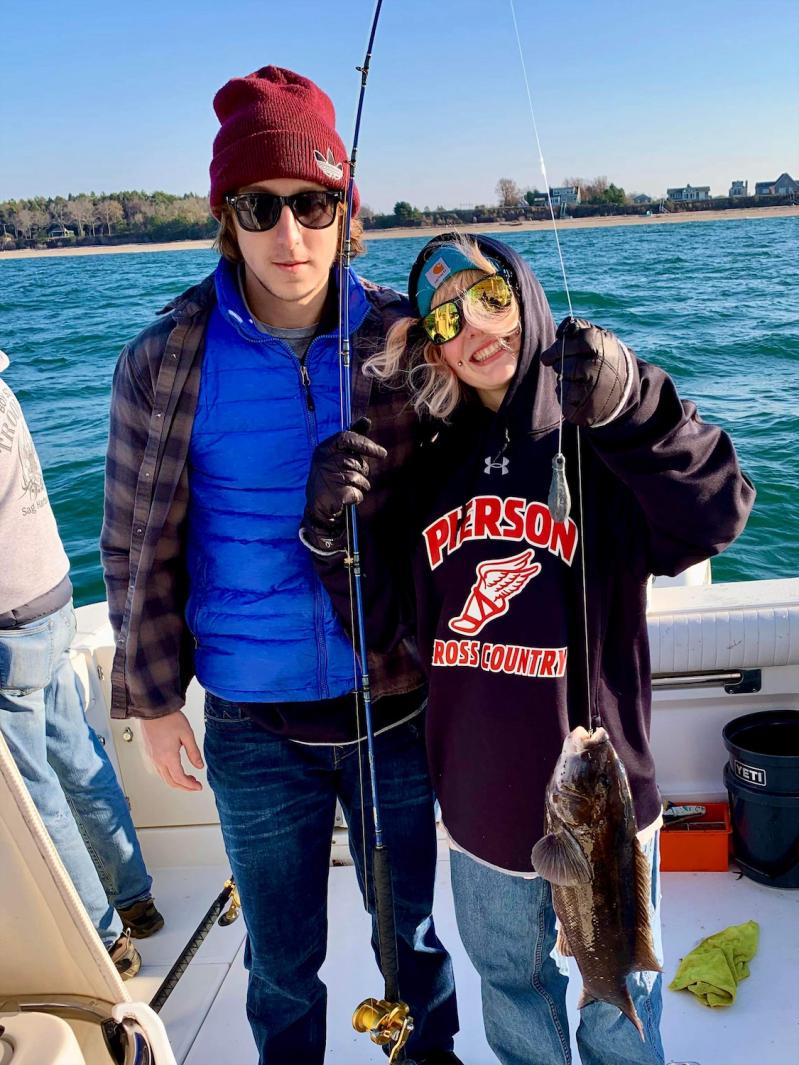 Troy Remkus and Gigi Llama, who was fishing for the first time, had a fine day catching blackfish before the Thanksgiving holiday.
Chris Remkus
By Jon M. Diat

The morning before Thanksgiving, Terie and I took three ferry rides in order to get to New London, Conn., on our way to visit her brother and sister, as well as several of our nieces and nephews in the Boston area to celebrate the holiday together for the first time in three years since Covid-19 broke out.

Sitting in the warm main cabin of the Cape Henlopen ferry, I enjoyed the final leg of our 90-minute journey from Orient Point to New London, constantly peering out to the south and east off the starboard side.

Personally, I was curious to see where boats were set on anchor in their pursuit of blackfish. Once a fisherman, always a fisherman. The blackfish bite is still on, but it will come to an end shortly with the rapidly cooling waters, and the season closes on Dec. 22.

That said, most significantly as I sat in my seat on the Cape Henlopen, I was reminded that she has a most incredible history that few aboard that morning probably knew about.

Rather drab and unassuming in appearance, the 314-foot solid steel ship, which holds some 100 vehicles, earned the Ship of the Year award last year from the Steamship Historical Society of America. The award is given in recognition of a significant milestone or any accomplishment contributing to the historical importance of the engine-powered vessel. And this one had quite a note in history.

The humble ferry boat of today participated in the historic invasion of Normandy on D-Day in World War II, dropping off 200 men and 70 vehicles of the 29th Infantry Division. She then moved a few miles north of Omaha Beach, where she stood tall, taking on soldiers who were wounded in the invasion that changed the tide of the war.

As the story goes, after a period of inactivity following the war, the Cape Henlopen was decommissioned and sold to the Chesapeake Bay Ferry District of Norfolk, Va., where she began a second career. For over two decades, the Cape Henlopen operated between Lewes, Del., and Cape May, N.J., for the Delaware River and Bay Authority, and since 1983, she has served the waters between New London and Orient Point. She has certainly experienced a wonderful long life on the water.

Back to Normandy, I’ve been most fortunate to have twice visited the beautiful coastline where the invasion took place. Each trek I made to the windy, damp, and gray landscape brought tears to my eyes. Looking down the 200-foot cliffs to Omaha Beach below, one cannot help but wonder how any soldier could have survived the onslaught of enemy gunfire from high above. They were sitting ducks on the sandy beach.

Not far from the beach, the Normandy American Cemetery and Memorial was built on the site of a burial ground established by American forces on June 8, 1944. There, it honors the graves of 9,387 United States soldiers who were killed in the landings and ensuing operations (over 425,000 Allied and German troops were ultimately killed during the invasion). The estimated total battle casualties for the U.S. were 135,000, including 29,000 killed and 106,000 wounded and missing.

A walk through the American cemetery is beyond surreal and incredibly emotional. It’s impossible not to weep and visualize the events of those days. Upon my first visit, I was totally exhausted. After our tour, I recall attending a dinner in nearby Honfleur, a most scenic seaside village, where I could barely lift a fork. I had no appetite.

As for Thanksgiving last week, the voyage aboard the Cape Henlopen brought a greater appreciation for how much we should be thankful for. May she continue to experience fair winds and following seas in her crossings.

It may sound like a broken vinyl record, but Brandon Sausele of Lake Grove once again won the Montauk SurfMasters fall striped bass tournament. For Sausele, it marks the sixth time he has taken the top prize in either the spring or fall event. He also won the Montauk Surf Fishing Classic back in early October. By the way, Sausele is only 25 years old.

As for his background, Sausele spends countless hours in the dark of night in and around Montauk as his work schedule allows (the 70-mile drive each way deserves an award in itself). The 38-pound striper that he caught and released back in October proved to be the winning fish. Coming in second was Bill Wetzel with a 30-pound fish, with Bill Schulken close behind with his 29-pounder. Both are also seasoned surf rats.

It appears Sausele has now graduated into a class of his own. He is widely respected by many of his peers and is considered to be one of the best around the Montauk area to hunt down large striped bass from the shore. Sausele puts in the time and has earned his rewards. Congratulations once again.

Over at Tight Lines Tackle on Bay Street in Sag Harbor, the owner Ken Morse is running his annual holiday sale. Rod and reel combos are 15 percent off, while rods, lures, and miscellaneous items can be had for a 10-percent discount. In addition, a $100 gift certificate can be bought for $90. Tight Lines will be open until Dec. 21. Note that Morse’s shop is closed on Tuesdays and Wednesdays.

On the fishing scene, Morse said that some striped bass can still be had from the ocean beaches for casters from Amagansett to Southampton. Note that the season for stripers comes to an end on Dec. 15.