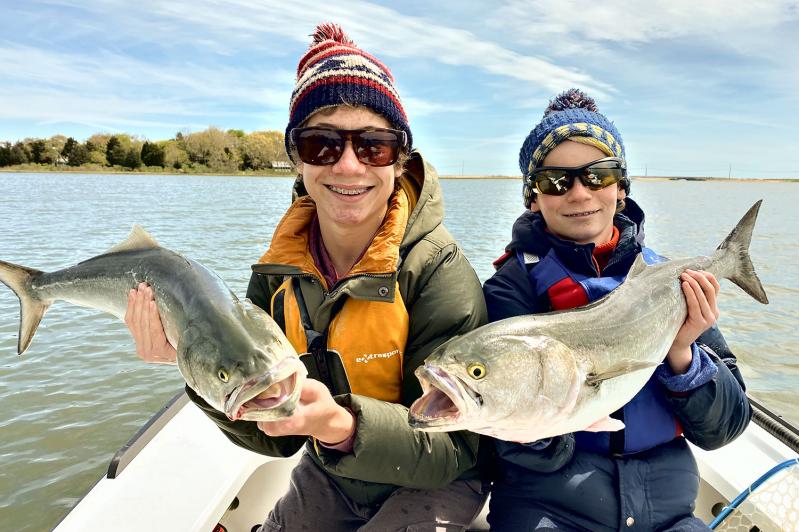 Burke Dunne, left, and his brother, Hewie, caught a nice brace of big bluefish on a recent trip in Gardiner's Bay on their uncle's boat.
Capt. Merritt White
By Jon M. Diat

When I was boarded by the Coast Guard a few weeks ago for a safety inspection, I was also reminded of the fact that anyone who operates a motorized boat or motorized water vessel of any kind (including Jet Skis) in New York, will need to sign up for a mandatory boating safety course by 2025. This new law, which took effect last year, is much needed and welcomed.

Called Brianna's Law, it is named after Brianna Lieneck, an 11-year-old who was killed in a boating crash with her family on the Great South Bay in 2005. The unfortunate accident strongly illustrated the point that a mandatory safety course for everyone given permission to operate a boat is just common sense. In 2019, there were over 250 boating accidents reported statewide that resulted in 15 fatalities. Mishaps and accidents don't just happen in a car.

Upon completion of the course, you will be issued a new driver's license card affixed with the logo of an anchor in the lower right-hand corner of the license.

More information on the boating safety course can be accessed online via the New York State Department of Parks, Recreation, and Historic Preservation at on.ny.gov/3fLJjVU. The course can be taken online or in person.

Many long-time boaters may see this as a big inconvenience, but it's the law now, and, besides, you just might learn something. Spread the word.

On the fishing scene, the action continues to build with the warming air and water temperatures. Topping the hit list are weakfish, which have shown up in Noyac and Peconic Bays in numbers not seen in decades. Equally impressive are large striped bass that have appeared around the south side of Shelter Island and other inner bays and harbors. Many of the fish caught are over the 28-to-35-inch slot requirement, and need to be safely returned.

Speaking of big bass, the Montauk Surfmasters Spring Shootout tournament is underway. Concluding on July 11, the catch and release tourney is open for men, women, and youth fishing in either waders or wetsuits. The bass sharpie Brandon Sausele has taken the early lead in the men's wetsuit division with a hefty 31-pound fish. Sign-ups can be done online at montauksurfmasters.com or in person at Paulie's Tackle Shop in downtown Montauk.

Paul Apostolides of said establishment says that the bass fishing on the south side has improved a bit, with some bigger fish showing up. "It's on the upswing of late," he said. "And there are bluefish scattered in the same area, as well as on the north side."

Over at the Tackle Shop in Amagansett, the owner, Harvey Bennett, spoke highly of the current fishing scene saying that many species are now in residence. "Other than fluke, pretty much everything else is doing well," he said. Bennett added that bass fishing remains good along the ocean or bay-side shores, while porgies and bluefish have continued to solidify their hold in East End waters.

"And don't overlook the freshwater scene either," he said. "Fort Pond in Montauk has been hot with walleye and some big carp."

Sebastian Gorgone, the man behind the counter at Mrs. Sam's Bait and Tackle in East Hampton, was also enthused about the action this week. "Like the weather, it's getting hotter," he said. "The worm hatch continues in Three Mile Harbor and the bass are popping up in various areas there. Porgies have begun to settle up in Cherry Harbor, and the action for bluefish remains very strong at Gerard Drive and pretty much everywhere else."

"It's probably the best run of weakfish since the 1970s," said Ken Morse at Tight Lines Tackle in Sag Harbor. "Noyac and Peconic Bay have been the hot spots with either diamond jigs or strips of squid fished on a hi-lo rig the best options." Note that anglers can retain only one weakfish over 16-inches per day. Morse added that blowfish have shown up for shoreline anglers dunking bits of clam at Long Beach, and that bluefish "are just about everywhere."

"We've been having a blast with the blues all over the East End," Capt. Merritt White of Gunkholin Charters said of the overabundance of bluefish this spring. The light-tackle guide, who received his college degree in biology and environmental science, has also experienced good fishing for striped bass in various creeks and bays. "The afternoon ebb tides have been the ticket of late as the bass are much more active metabolically in that warmer water." Looks like that college diploma came in handy.