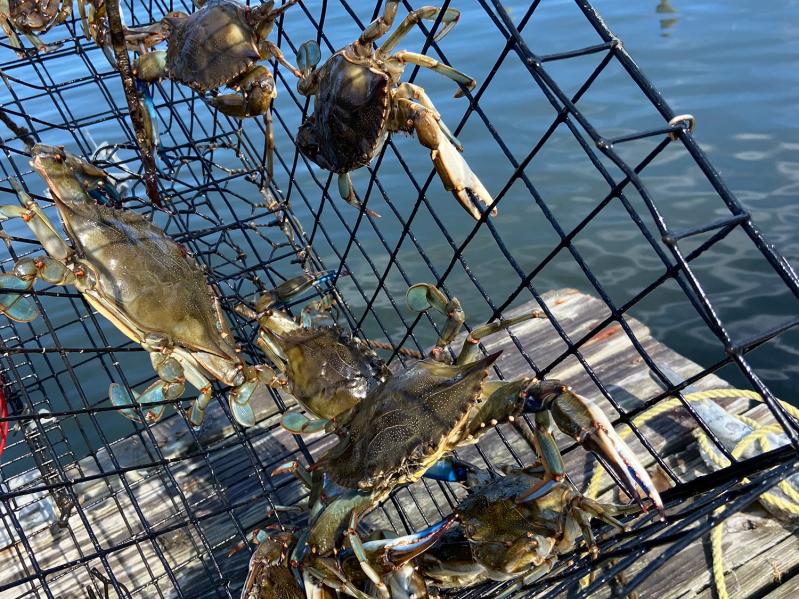 Blue-claw crabs have been plentiful this year in local creeks and harbors.
Jon M. Diat
By Jon M. Diat

About a month ago, I hauled out my lobster traps for the season. The area in which I set my gear was to close by order of fishery regulators shortly after Labor Day, but given the poor catches I had experienced the past few months, I found no plausible reason to keep up with the effort.

The hard work and added expense of fuel, plus the lack of lobster, meant it was time to call it quits until March, when my traps would once again re-enter the water. Let us hope that 2023 will be a better year in so many ways.

On Saturday morning, I did the same with my blue-claw crab traps. It was a bit of a mixed season for the blue claws, but it was time to let the chicken mesh wire cages dry out on land. Over the past season one week there would be a nice catch of large-size specimens, followed shortly by a multitude of small ones (crabs must measure at least four and a half inches across the carapace to be retained). It was feast or famine.

Still, I could not complain. Enough were gathered since June to be enjoyed in a multitude of culinary preparations, including crab cakes, creamy bisques, and salads. I’ll never turn down crab no matter the preparation.

For those lovers of crab, it’s not too late to catch some. Good quantities can still be had over the next few weeks in various creeks, coves, and harbors, before they burrow in the mud and sand for their winter slumber.

“I had a customer come into the shop on Saturday with a friend and they bought $185 worth of crab gear,” including traps, nets, and hand lines, said Ken Morse, the proprietor of Tight Lines Tackle in Sag Harbor. “Some excellent crabbing lies ahead.”

With all of my traps out of the water, it was also time to pause a bit and take a breath. My wife and I have an upcoming two-week road trip to visit eastern Canada, including Quebec, Prince Edward Island, and New Brunswick. It will be nice to venture out on an extended excursion, something we have not done since before the start of Covid. Some fishing will, I hope, be incorporated in the itinerary as well.

By the time we return over Columbus Day weekend, the opening of the season for blackfish will be right around the corner. For those who target the toothy tog in Long Island Sound, the season gets underway on Oct. 11, while in the rest of New York waters it starts four days later on Oct. 15.

“There is still some fine fishing to be had before blackfish starts,” Capt. Harvey Bennett, the former longtime owner of the Tackle Shop in Amagansett, said on Sunday. “There are plenty of false albacore running around, and the porgy and fishing for sea bass has been top-notch in many areas to the east. And don’t forget bluefish and striped bass, they are gearing up for their fall run.”

While in semiretirement, Bennett has kept busy providing guided fishing and birding excursions by land and sea, accompanied by colorful stories and anecdotes of the local area and people. “This is my favorite time of the year,” he added. “There are less people around and when the conditions are right, the fishing is excellent.”

“Don’t put the rods away,” he warned.

Back to Morse at Tight Lines, he was smiling broadly on Sunday afternoon about the fishing scene off Montauk. “I had several customers out this weekend and they had some excellent fishing for tuna on large top-water plugs. The action was insane.”

Morse added that while the striped bass bite slowed a bit near Montauk, that was not the case closer to Block Island. “Really good fishing there,” he said.

Closer to home, Morse said that bluefish are thick at Jessup’s Neck, and that weakfish up to five pounds were being landed in Noyac Bay. He added that the ocean beach bite for striped bass has seen improvement on a daily basis too.

“When the winds don’t blow, there’s some good fishing going on,” remarked Sebastian Gorgone at Mrs. Sam’s Bait and Tackle in East Hampton. “The false albacore have arrived around Gardiner’s Island, which is great news, and there has been some nice striped bass fishing back in the bays to the west with keepers in the mix too.”

Gorgone added the blue claws are still on the prowl in Three Mile Harbor, and that snappers are keeping kids and adults busy at local docks and bulkheads.

The Viking Fleet out at Montauk has also taken advantage of the outstanding run of tuna. A recent trip offshore on the Viking Star resulted in a full load of yellowfin and bigeye tuna up to 160 pounds for its arm-weary fares. The Star still has a few openings at the rail on a few upcoming trips.

Surfcasters take notice: The Montauk Surf Fishing Classic tournament for striped bass and bluefish is slated for Friday, Sept. 30, through Oct. 2. Fishing kicks off at noon that Friday and continues through Sunday. The awards ceremony will take place at the Montauk Lighthouse on Sunday at 12:30 p.m. and the first 100 attendees will receive a goody bag and a free ticket for a raffle.

Weigh-in and registration for the contest is at Paulie’s Tackle Shop in downtown Montauk; the entry fee is just $20.