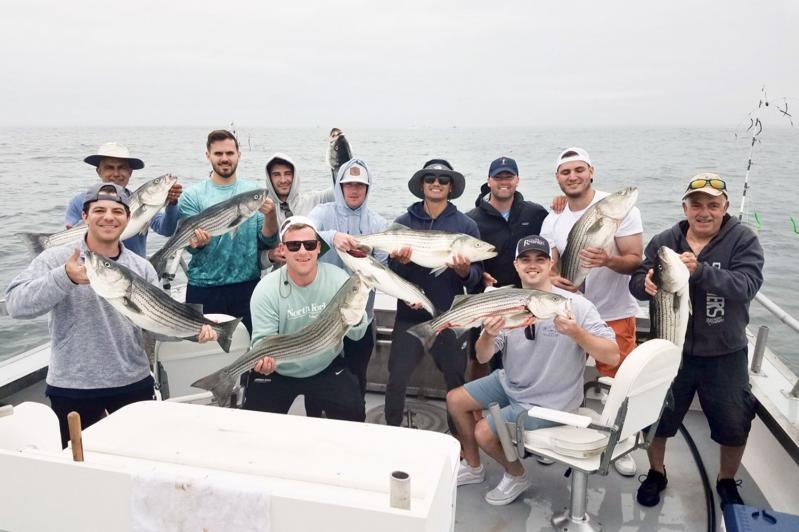 Want to catch a striped bass? Then Montauk is clearly the place to be right now.

By all means, run, don’t walk, to the nearest boat if you want to cash in on action that many have described as epic.

It’s been almost impossible not to catch a striped bass the past few weeks.

“Usually, in past years, it’s been game on by Mother’s Day,” he added. “But in the last five or six years, it’s been late May or even later. This season, by the middle of May we’ve had a ferocious bite on and great catches on every trip. It’s been amazing and the action continues.”

Capt. Timothy O’Rourke of Montauk Point Fly Fishing, a light-tackle guide, concurred with Aaronson that “the last few weeks have been just fantastic.”

“It’s been all sizes of bass and nonstop catching,” Capt. Paul Bruno of the Elizabeth II, another longtime Montauk charter boat fisherman, added on Sunday afternoon. “People should not be sitting around at home right now and waiting until this bite is over.”

Whether by casting a simple diamond jig, bucktail, or swimming plug, the action has been furious, no matter the tide. It has rarely taken more than an hour or so for all anglers aboard a six-pack charter boat to catch the limit of one bass per person between 28 and 35 inches in length. Dinner is served.

Larger fish over 40 pounds and above have also been landed and released back to the wild in recent days.

Bored with bass? Well, alligator-size bluefish are also mixing in with the stripers. The sleek yellow-eyed fish, which come equipped with a set of razor-sharp teeth, have been running to over 12 pounds in weight.

The tackle-busting bruisers have pleased those seeking action of a different kind and are taking the same lures as the bass. Note to all: Bluefish are very tasty too.

No matter how you slice or dice it, smiles and sore arms and wrists abound. It’s worth the hurt.

There have been few complaints on other fishing fronts. Porgies remain plentiful and large in size -- up to three pounds and above -- in many areas that extend all the way from Jessup’s Neck east to Montauk Point. Drop a baited hook adorned with clam or a piece of squid or sandworm and you are in like flint. Even catches of fluke have started to strengthen.

Like weakfish? Try just to the south of buoy 16 in Noyac Bay. A small diamond jig or soft plastics fished in 40 to 55 feet of water will do the trick, with fish up to seven pounds landed in recent days. If you feel the need to use bait, a high-low rig baited with strips of squid or sandworms is a surefire method for a quick and easy catch. Like stripers, there is a daily possession limit of one fish per person measuring over 16 inches.

Like a little friendly competition? The Montauk SurfMasters Spring Shootout tournament is underway. Ending on July 10, the popular catch-and-release tournament has an entry fee of $100. Those under 18 can enter for free. Sign-ups can be done online at montauksurfmasters.com or by stopping by Paulie’s Tackle Shop in downtown Montauk.