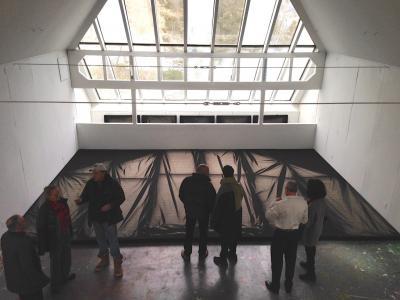 The stretched fabric was placed near the studio window it related to on the first floor.
By Jennifer Landes

Halsey Mckay Gallery in East Hampton opened two shows this weekend, an artist-curated show in the Newtown Lane gallery and a single artist installation at the former residence and studio of Elaine de Kooning on Alewife Brook Road.Chris Duncan’s “Year” is installed at the de Kooning house and marks a year of loss and challenge for the artist. He began his project in January of last year, flying from his native California to install black cotton fabric in the solarium and studio windows of the building in order to capture the image of the window into the fabric. It was part of a series the artist has worked on recently that uses sun bleaching to map certain locations and features. After the four months he had been allowed to make his piece had passed, it was apparent that the exposure he was looking for had not taken hold and he was forced to come up with another plan. He constructed full-scale replicas of the windows and left the cut fabric outdoors in these frames, one placed in Oakland, Calif., and the other on a rooftop in Brooklyn. After a year of exposure the fabric is back in the house, displayed on the floor of the studio and along the wall of the basement. A brunch reception on Sunday marked the opening of the show, which is accessible through April 11 by appointment.Halsey Mckay also opened a show in its gallery on Saturday night featuring the artwork and curatorial inspiration of Jodie Vicenta Jacobson. The artist, who is primarily a photographer, showed her photographs and sculpture upstairs and selected works by her friends and colleagues for the downstairs space. It will be on view though April 5.