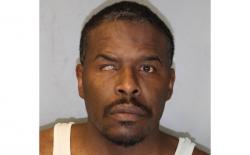 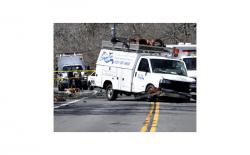 More than a week after a serious three-car accident on Route 114 in East Hampton, police are still looking for witnesses to help them figure out what happened. The drivers of a Subaru Forester and a Chevrolet utility truck that collided head-on just north of Stephen Hand’s Path on April 16 were both airlifted to Stony Brook University Hospital, but their injuries were not believed to be life threatening, according to East Hampton Town police.

Two men charged with felony domestic violence appeared separately in East Hampton Town Justice Court in recent weeks. David M. Barlow told Justice Steven Tekulsky during his arraignment last Thursday that he was an American citizen but had been living in Mexico for the past 14 years. He had driven here with his girlfriend of four months, Jordana Esses of Hand’s Creek Road, East Hampton, earlier this month, he said. Ms. Esses told the court that Mr.

May 1, 2014
They Came Through Under Pressure
By
Taylor K. Vecsey

East Hampton A vandal tried to pry open the door to a gas cap on a Nissan parked behind the Hudson City Savings Bank on North Main Street earlier this month. Ana Stuckart told police the damage would cost about $150 to repair. A chimney fire on Cosdrew Lane brought out the East Hampton Fire Department Friday morning. According to Dave Browne, the town’s chief fire marshal, squirrels had gotten into the chimney, which appeared to have been poorly installed, further compromising its integrity and leading to the fire. Mr.

An East Hampton man with a history of arrests was indicted Monday on three felony weapons charges. A grand jury in the Cromarty Criminal Court Complex in Riverside indicted Melvin C. Smith, 48, on charges of possessing a .38-caliber handgun and 100 rounds of high-velocity ammunition that were discovered in his house on Morris Park Lane on April 16. East Hampton Town police said they found the gun and ammunition during a routine search that was required in a plea deal Mr. 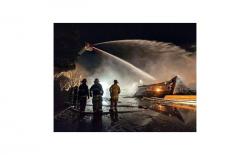 An Amagansett man who was charged with driving while intoxicated after crashing a 2002 Chevrolet into a tree on Friday afternoon apparently took his own life three days later. Christopher A. Cosich, 47, a well-known physical trainer here and championship bodybuilder, drove off Abram’s Landing Road in Amagansett a few minutes after noon Friday, striking a tree, East Hampton Town police said.

Police arrested a Springs man Tuesday on a felony assault charge following an alleged Monday stabbing. Alexander R. Fernandez, 21, was said by police to be arguing with Wayne Hopson, apparently over a female companion, when Mr. Fernandez stabbed him in the arm with a scissors at about 3:45 a.m. at 15 Fort Pond Boulevard in Springs. Police were alerted by Southampton Hospital, following the procedure for when someone is admitted with a wound believed to be from an attack. In East Hampton Justice Court yesterday, Justice Steven Tekulsky said that Mr.

A quick course that could help save a life will be given Sunday by members of the Bridgehampton Fire Department Ambulance Company during an open house at the firehouse on School Street from 11 a.m. to 2 p.m. The public has been invited to stop by to watch demonstrations by emergency medical technician volunteers and learn hands-only cardiopulmonary resuscitation and get a close look at the inside of an ambulance. There will be free blood pressure tests, information about first aid, child-identification kits, and details about joining the squad.

East Hampton Village A call to police reporting an injured seal on Main Beach brought an officer to the scene early in the evening of April 28. “When approached, the seal ran back into the water. Appeared normal,” the report concluded. A man described by police as “East Hampton homeless” was found drunk and asleep on a bench behind the library on the morning of April 30. The incident report said that the man was “making a mess.” Police told him that he had to leave or face arrest for trespassing.