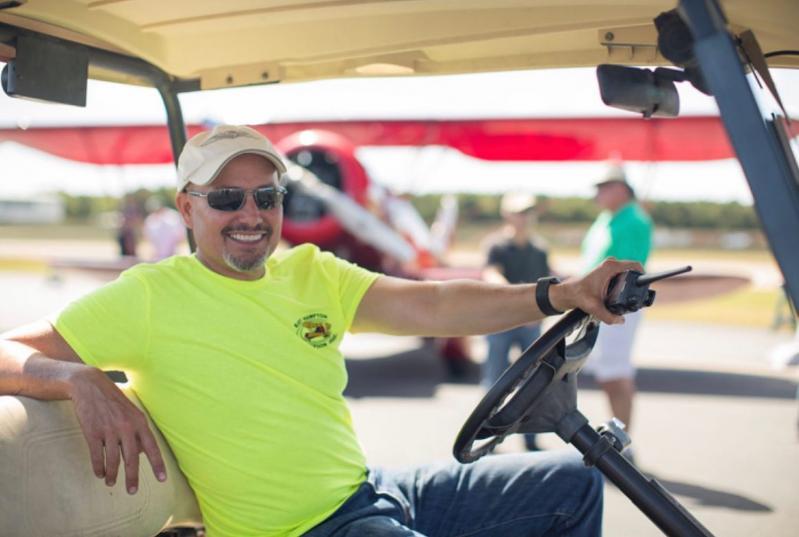 Kent I. Feuerring, who was president of the East Hampton Aviation Association, “always showed up at a party with the biggest smile,” said Tanya Malott, a friend.
Tanya Malott
By Carissa Katz David E. Rattray

Mourners filled the Old Whalers Church in Sag Harbor on Thursday afternoon to remember Kent I. Feuerring of Sagaponack, the pilot who died last Thursday when the small seaplane he was flying crashed at the edge of Three Mile Harbor in East Hampton.

In a service with metaphors about flying, the sky, and the stars, he was remembered as an adventurous, meticulous pilot and generous friend.

John Alpert, with whom Mr. Feuerring worked producing television commercials for 30 years, likened him to a whirlwind.

“He was one of the most capable and smartest people I ever met,” another friend, Frederick Solomon, said. “Kent was careful. Even when he took risks, they were calculated.”

Laura Eisman of East Hampton, with whom Mr. Feuerring had been in a long-term relationship, spoke about his selflessness and his rule to never leave anything unresolved. He was an early riser and would “work out, fly, and be at a coffee shop before I had even started my computer for the day,” she said.

Ms. Eisman as well as several speakers recalled that Mr. Feuerring never left a restaurant or party until he had scanned the room to be sure he had not overlooked anyone he might know — and some he did not. “His gregarious nature carried itself everywhere,” Rich Kresberg, a friend, said.

Mr. Feuerring’s mother, Marlene Feuerring, spoke as well. The two had dined together at the American Hotel in Sag Harbor the night before the crash. She talked about his childhood in Miami and their ongoing closeness. “He was everything in the world to me,” she said.

Owen Davis, a friend since childhood, said that Mr. Feuerring was a "perpetual-motion machine. He got things done.”

“Some are carried by the wind, but some cannot live without the wind,” Hank Muchnic, a friend of Mr. Feuerring’s who lives in Amagansett, said.

Mr. Feuerring had taken off from East Hampton Airport last Thursday at 12:19 p.m., according to automated data from FlightAware.com. He was in a Seamax M-22, a light sport-class amphibious aircraft, registered to an East Hampton limited liability company, according to Federal Aviation Administration records.

It was a perfect day for flying, with a cloudless blue sky and light winds out of the southwest. He flew southeast to the ocean, then headed along the shoreline to near Two Mile Hollow Beach in East Hampton Village before turning north-northwest toward Three Mile Harbor.

Around 12:30, John Reid, who lives next door to Three Mile Marina, at the southernmost reaches of the harbor, was outside when he heard a plane approaching. He looked up to see its left wing fall off and spiral toward the ground. “The plane followed it, and exploded upon hitting the water, violently,” Mr. Reid said last Thursday, watching from across the water as emergency responders searched through the wreckage.

Across the narrow section of the harbor, Jessica Ambrose was also outside. "All of a sudden, we looked up. It was the sound of the plane or something," she said. It did not sound quite right. "And then, literally, we saw the wing come right off," and the plane "went into a nosedive. . . . It was on a direct hit down, no coasting, no nothing."

On opposite sides of the harbor, she and Mr. Reid each called 911 immediately.

Doc Robertson, a neighbor of Mr. Reid’s, also heard the engine as the small plane approached. “It paused for a second, and then it popped, and then — bang.”

The plane came to rest partially on land and partially in the water. Its severed wing was found at the top of a nearby tree, on private property.

Ms. Ambrose said Thursday that she was impressed by how town police handled the matter. They were respectful of the neighbors and of the witnesses, she said, even letting her know that there were support services available to her if she needed to talk after witnessing the crash.

Mr. Reid did not know Mr. Feuerring, but he was familiar with the plane. “This guy has been flying over Three Mile Harbor and this area most of the summer,” he said.

People who knew him said he often invited friends and fellow pilots to join him for flights in the Seamax.

“He was an excellent pilot,” said Jonathan Glynn of Sag Harbor, a friend and former pilot who flew with Mr. Feuerring many times over the years, including in the two-seater Seamax.

Seamax planes, manufactured in Brazil, have a unique design that is “unusual for a seaplane” in that it “didn’t have any pontoons,” Mr. Glynn said. Because its propeller is above and behind the cockpit, offering wider views, flying in the tiny plane felt almost like being in a helicopter, he said.

Mr. Feuerring, a onetime advertising executive and film production consultant, enjoyed sharing his love of flying with friends, advocated for his fellow pilots and for airport interests, and helped foster an appreciation of aeronautics through the East Hampton Aviation Association’s annual Just Plane Fun Day, a September showcase for planes of various makes and vintages.

“He was very charitable,” said Mr. Glynn, the founder of the nonprofit Wings Over Haiti, which holds an annual benefit at the airport. “We counted on Kent to make our annual benefits a success, and he always came through.”

“Anybody who was active at the airport eventually got to know Kent,” Peter Boody, a fellow pilot and sometime flight instructor, said Friday. “He was gregarious and outgoing, and he knew everybody. It was almost dizzying, the intensity with which he dove into things. He was absolutely passionate about flying.”

Mr. Feuerring led the pilots association during the East Hampton Town Board’s as-yet-unsuccessful effort to privatize the airport. Mr. Boody said he had been crucial in carving out a place in the debate for the small private-pilot crowd, separating them from the helicopters and jets that are responsible for the majority of noise complaints.

“Kent started taking flight lessons at the East Hampton Airport over 40 years ago and has since become one of our staples,” Sound Aircraft Services, which is based at the airport, wrote on its Facebook page. “He would be one of the first ones on site on sunny mornings with blue skies, enjoying his first cup of coffee, and then take off to do what he loved most, cruising over our beautiful beaches, forests and meadows, taking photos and adding to his visual memories.”

“He was like everyone’s cheerleader,” said Tanya Malott, a friend whose son, Alex, went through the Ross School with Mr. Feuerring’s son, Jonas, 23. She described Mr. Feuerring as “positive, enthusiastic, welcoming. . . . He was always happy. He always showed up at a party with the biggest smile.”

The F.A.A. and the National Transportation Safety Board are investigating the accident along with East Hampton Town police, who have asked anyone who witnessed it or has information related to it to call detectives at 631-537-7575.

An obituary will appear in a future issue of The Star.

With Reporting by Christopher Gangemi