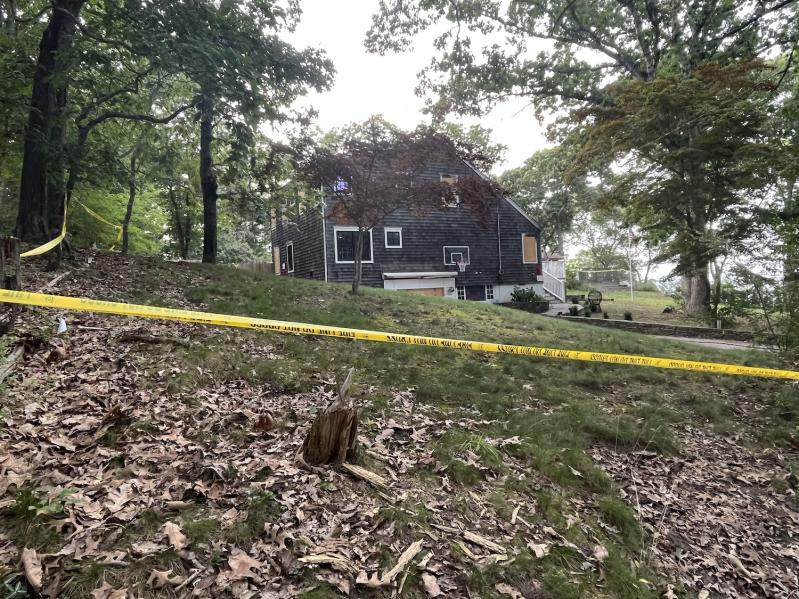 An Aug. 3 fire at this house in Noyac is believed to have started in an outdoor kitchen.
Christine Sampson
By Tom Gogola

Weighed down by discovery documents turned over to him by a Southampton assistant town attorney, Sean Cambridge, the defense lawyer Edward Burke Jr. told The Star on Friday that his clients, Pamela and Peter Miller, are "beyond traumatized" following an Aug. 3 fire at their Spring Lane house in Noyac that left two sisters dead.

The discovery documents turned over to Mr. Burke in a proceeding at Southampton Town Justice Court Friday afternoon reflected that the Millers had been cited for 58 Southampton Town Code violations (29 each) following the fire, which appeared to have started in an outside kitchen and led to the deaths of Jillian and Lindsay Wiener, 21 and 19, whose family was renting the house.

Among the violations were four that highlighted that the Millers did not apply for a rental permit before renting the property. Those permits typically involve filing detailed floor plans with the Building Department and consenting to a town inspection or providing one from a licensed architect or engineer.

Additional citations were issued to the Millers for failing to maintain smoke and carbon monoxide detectors, and, as Mr. Cambridge has previously noted, for "multiple charges relating to construction without permits, including but not limited to installation of an outdoor kitchen with connected utilities."

That kitchen has been cited by authorities as the likely source of the fire.

Lewis Wiener, 60, and his family were renting the house when a fire broke out around 3:30 a.m. Mr. Wiener and his wife, Alisa, 52, escaped with non-life-threatening injuries, as did their 23-year-old son, Zachary, who leapt to safety from a second-floor window. The two young women were on the second floor, unable to escape.

The brief Friday afternoon hearing before Justice Karen Sartain mostly centered on an agreement between Mr. Cambridge and Mr. Burke to seal numerous photos of the young women that were contained in the discovery packet.

"Some will be sealed because they are sensitive," said Mr. Burke before the brief hearing, "and of course I agreed to that."

After reviewing the photos, Ms. Sartain agreed to seal them under a protective order. They will not be released to the public.

Along with the documentation of dozens of alleged code violations, the discovery packet turned over to Mr. Burke also included audio of 911 calls the night of the fire and photographs taken at the scene.

Mr. Cambridge said he would provide Mr. Burke with the last piece of prosecutors' discovery -- witness statements -- before the next hearing on this matter scheduled for Nov. 18.

The Millers were not in court on Friday.

Two lawyers for the Wiener family were in attendance. They declined to comment to reporters except to say that they were there on behalf of the family -- who are also obviously devastated by the death of the two women.

According to a Legacy.com obituary, Jillian taught yoga, played ice hockey, loved camping, and was a rising senior at the University of Michigan. Lindsay would have been in her sophomore year at Tulane University in New Orleans this fall.