In an article last week on the upcoming trial of Jason Lee on charges including rape, a headline on the article stated that jury selection would begin on Jan. 27. That date has been set aside for any remaining pre-trial issues to be settled, with jury selection expected the following week. 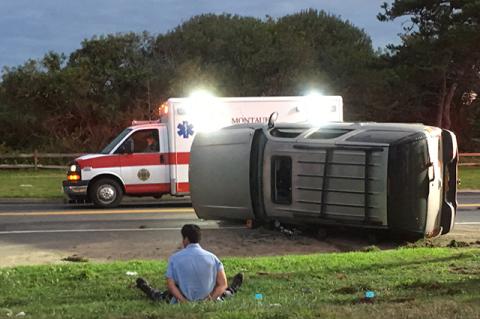 A former real estate agent from East Hampton who injured a town police officer in a drunken-driving crash over Labor Day weekend pleaded guilty to several charges in Suffolk County Criminal Court on Monday and as a consequence will avoid jail time.

A minor traffic accident occurring midafternoon on Friday led to drunken-driving charges against a 50-year-old Southampton man whose breath test, according to East Hampton Town police, produced a reading just short of the level that would have required a trip to the hospital.

A bicyclist, Steven Ramirez, 26, of Philadelphia, was taken to Southampton Hospital last Thursday afternoon after being hit by a car on Route 114 near Goodfriend Drive in East Hampton. The driver, James M. Bayrami, 25, of Sag Harbor, who was arrested after the accident and charged with driving while impaired by drugs, was to be brought back to East Hampton Town Justice Court today after being taken to the county jail in Riverside, unable to make bail.

An East Hampton man was charged with drunken driving shortly after midnight Monday after crashing his 2009 Mercedes Benz into a telephone pole in Wainscott, according to East Hampton Town police.

William A. Dreher Jr., 48, told the first officer to arrive that he had lost control of the car “due to wet pavement.” He had been eastbound, just past the Montauk Highway intersection with West Gate Road, before veering across the highway and hitting the pole.

A judge has dismissed a drunken-driving charge against Mosel Katzter, whose vehicle was involved in a roll-over accident on Aug. 4 that sent him and three passengers to the hospital.

“I was not intoxicated the night of the car accident,” Mr. Katzter said in an email to The Star. He blamed the accident on faulty brakes. “Too late for me, I found out the hard way that my car model was recalled twice in the last five years for braking problems.”