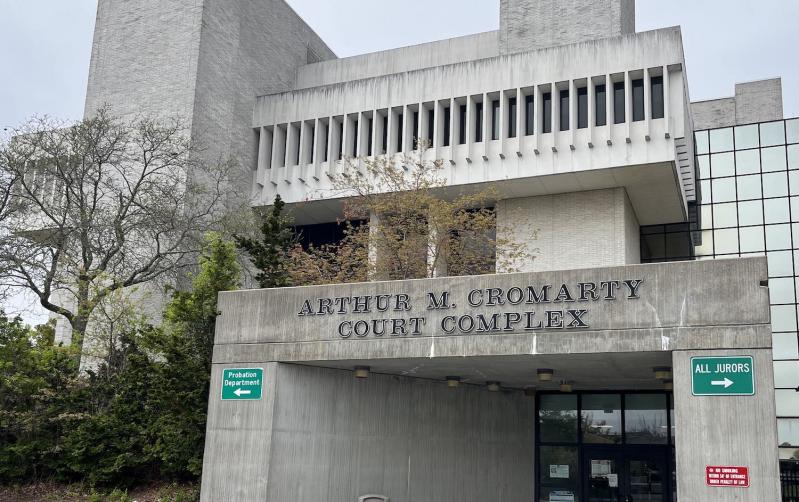 A spokeswoman for Suffolk County District Attorney Ray Tierney confirmed that New York State Supreme Court Justice John B. Collins set a sentencing date of April 14 and outlined an anticipated sentence of five years in prison plus five years of supervised release. For first-degree manslaughter, considered a violent felony under state law, that is the minimum sentence that can be imposed; the maximum is 25 years.

Mr. Somers, a 45-year-old Amagansett resident and father of a teenage daughter, was a caddy master at the Maidstone Club. Mr. Dern was a caddy there himself, and investigators said the two had been watching a golf tournament on TV and drinking alcohol together at Mr. Dern's house on Lincoln Avenue in Springs before they got into a fight. Mr. Somers's death was attributed to "neck compression"; his hyoid bone had broken, which Kerriann Kelly, the prosecutor at the time, said would have taken "quite a degree of strength and force" to do.

Few details initially emerged from the night that Mr. Somers died, though Newsday reported last Thursday that Mr. Dern told Justice Collins that he was not acting in self-defense.

Mr. Dern was arraigned on Feb. 11, 2022, in Southampton Town Justice Court — where the case had been transferred after East Hampton Town Justices Steven Tekulsky and Lisa Rana both recused themselves. Suffolk County District Attorney Ray Tierney later picked up the case.

According to the prosecutor's testimony that day last year, an emergency medical technician responding to the 911 call found Mr. Somers on the porch, unresponsive, with no pulse. He was rushed to Stony Brook Southampton Hospital, where he was pronounced dead. The 911 call had come in at 10:40 p.m. and there was evidence that at some point, Mr. Dern told his wife to turn off the home security cameras.

Mr. Dern was initially held on bail that Southampton Town Justice Karen Sartain set at $500,000 cash, $1 million bond, or $3 million partially secured bond. When Mr. Tierney's office took over, Justice Collins reduced bail to $150,000 cash or $1.5 million bond or partially secured bond, acknowledging that because Mr. Dern is a father of two young children and the main breadwinner of the family, he was not a flight risk.

As of press time this week, Mr. Dern remains free on $150,000 cash bail. One of his attorneys, Andrew J. Weinstein, declined to comment last Thursday. Mr. Dern is also being represented by Brian DeSesa, of the Adam Miller Group, who did not reply to a request for comment.

This story has been updated since it was first published online.