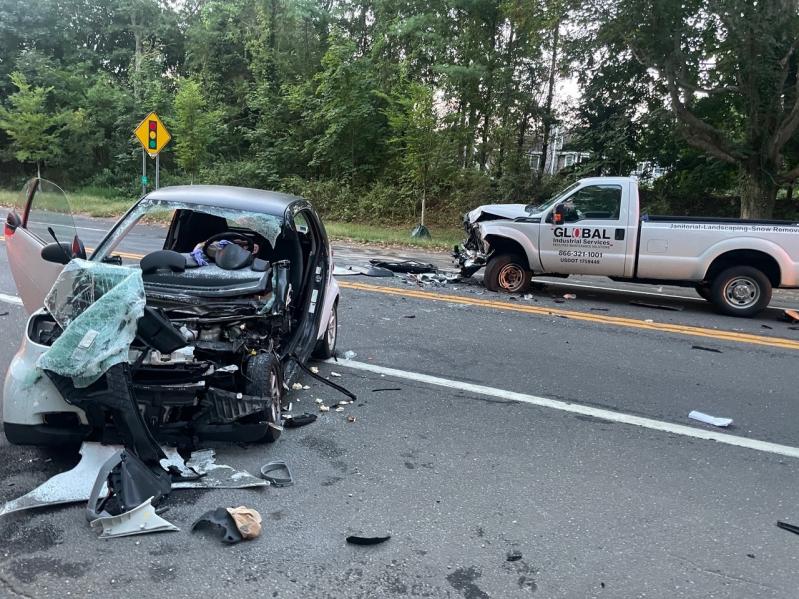 Traffic on Woods Lane in East Hampton was closed for four hours after a serious early-morning accident there.
Josh Franklin
By Tom Gogola

The crash, at 5:58 a.m., happened in front of the Jewish Center of the Hamptons, said Lieut. Greg Brown of the village police, and involved a 2009 Kia Smart car and a 2016 Ford pickup truck. The Ford was headed east during the morning trade parade when Mr. Dias’s Smart car — which was also in the eastbound lane, except headed west, police said — ran into it. The Kia bore the brunt of the damage, but the front end of the Ford was crushed in the collision.

Mr. Dias, of Hampton Bays, was driven by ambulance to Stony Brook Southampton Hospital and then to the Stony Brook Trauma Center. Police had put in a call for a helicopter medevac directly to Stony Brook, “but it was not available,” said Mr. Brown. Mr. Dias, he said, suffered serious injuries but was in stable condition as of Tuesday afternoon.

Alfonso Tamoyo of Bay Shore, 68, was driving the commercial vehicle, owned by Global Industrial Services, a nationwide facilities maintenance company based in Syosset. Mr. Tamoyo was uninjured. The drivers were the sole occupants of their vehicles.

Police shut down Woods Lane for four hours as they conducted a preliminary investigation into the cause of the crash and tried to determine why Mr. Dias might have been in the wrong lane at the wrong time. Mr. Brown said yesterday that it was too soon to say, but did not rule out that the driver might have had “some sort of medical condition.”

An accident report released yesterday by the Village Police Department said Mr. Tamoyo told police that Mr. Dias had “crossed over the double yellow line, striking his vehicle,” an account backed by a witness, Kenneth Kent of Roulette, Pa.

The Smart car, registered to Alex Dias of East Hampton, 51, was impounded for a safety inspection. Both vehicles were towed from the scene.

The investigation is ongoing, said Mr. Brown. Woods Lane was reopened at 10 a.m. Monday, just in time for the tail end of the eastbound rush.