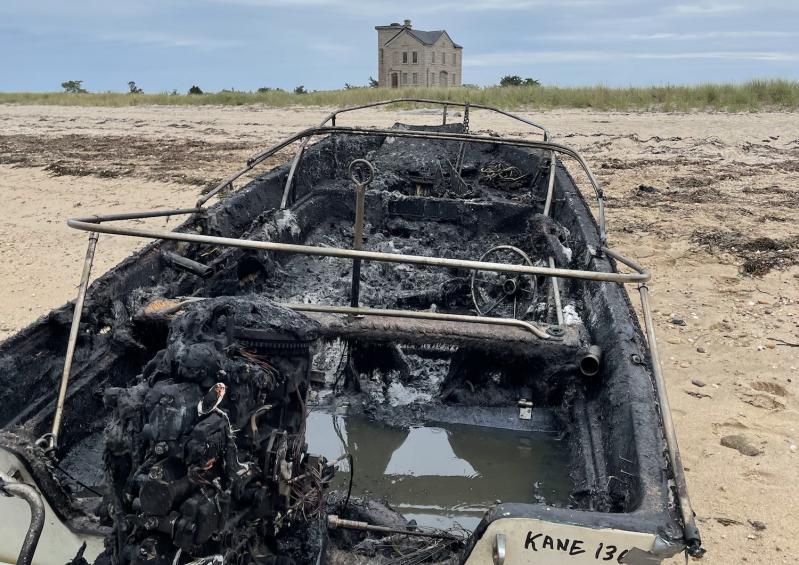 When he realized there was a fire under the boat's back hatch, Larry Kane said he "thought about taking the fire extinguisher and putting it out myself, but I was afraid the gasoline might explode."
Larry Kane
By Christopher Gangemi

A 17-foot Boston Whaler caught fire just off the Cedar Island lighthouse by Cedar Point at around 11 a.m. on Sunday, causing its sole occupant, Larry Kane of East Hampton, to dive off approximately 150 feet from the shore. Seconds after he jumped off, he said, the boat was engulfed in flames.

"That boat is toast," said William Plitt, service manager at the East Hampton Marina, who later received the boat. "I haven't seen one burned up like that in a while."

"I was coming from Sag Harbor to Amagansett," Mr. Kane said over the phone on Monday. "I looked back and saw smoke coming out of the back hatch. I opened it up and there was fire, basically right up to the gas tank. I closed the hatch and thought about taking the fire extinguisher and putting it out myself, but I was afraid the gasoline might explode."

"It was a little surreal. I've been on boats my whole life and I've never had to abandon ship."

"I was very lucky I was so close to shore and that the water was warm," he said. He borrowed a fisherman's phone and called the police.

"The equipment on the fireboat didn't seem too great. The guys were able to put it out, but had my boat been much larger they would have had great difficulty," Mr. Kane said. "It was just shocking that a fiberglass boat could go up so fast. It was a big deal."

He said friends over at HarborFest saw the black plume of smoke caused by the fire. "If any of the larger boats in Sag Harbor caught fire, it would be terrible. The current fireboat would not be able to put out 95 percent of the boats in the harbor," he said.

That could soon change. On Sunday, the Sag Harbor Partnership will host a Rock the Boat fund-raiser, with proceeds going toward a new fireboat.

"Sag Harbor is eastern Long Island's primary boating and yachting center and yet it remains largely unprotected from marine-based fires," the partnership notes on its website. "The all-volunteer Sag Harbor Fire Department has over 30 miles of coastline to serve and lacks the minimum standard equipment to adequately protect lives, property, and our coastline from emergency events."

"Sag Harbor is really a city on the water in the summertime," said Mr. Kane, a 35-year resident who owns a construction business. "They have limited capability to put out these fires. It's a very much overlooked thing."

He says it took maybe 30 minutes for the fire to be extinguished before his boat was brought to shore. Geoffrey Briggs, who owns the East Hampton Marina in Three Mile Harbor, then drained the boat of water and towed it from the beach.

"A big thank you to the police and firefighters who took a bad situation and made it good," Mr. Kane said. "They even brought a Dalmatian. You couldn't make it up."