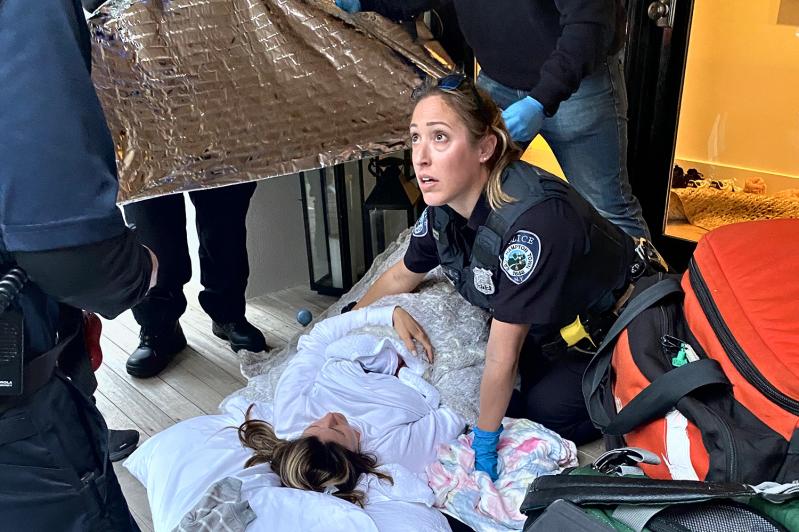 When Cody and Lauren Vichinsky couldn’t make it to the hospital in time for the arrival of their baby, Officer Grace Peterson of the East Hampton Town Police Department stepped up to help.
Cody Vichinsky
By Christine Sampson

When they talk about the birth of their second daughter, Cody and Lauren Vichinsky will have quite the story to tell.

Isabelle arrived five weeks early, silent, blue, with the umbilical cord wrapped around her neck. Her mother gave birth to her on the porch of their house as the sun was setting on April 20. It was 40-something degrees, and there were bath towels and blankets all around for warmth. There was no doctor — only a town police lieutenant and two officers to help while the ambulance made its way to the Oak Hill Lane house.

The Vichinskys’ 18-month-old daughter, Emerson, was running amok inside; she knew something big was happening. So did Odin, the family dog, who barked and barked in the foyer.

It was Officer Grace Peterson who coached Ms. Vichinsky through Isabelle’s delivery, drawing on her experiences giving birth to her own two children. Officer Peterson was “phenomenal — like she was a doctor,” said Lt. Daniel Toia, who was first on the scene along with Officer Jake Bramwell, administering oxygen to Ms. Vichinsky as soon as he arrived.

Officer Peterson unwrapped the umbilical cord from Isabelle’s neck and used a gloved hand to clear her mouth. Mr. Vichinsky supplied a nasal suction device to remove the fluid in the baby’s nose, plus more blankets to keep her and her mother warm.

Finally, Isabelle squeaked, then took a breath. The ambulance arrived, whisking mother and baby to Stony Brook Southampton Hospital, then later to the hospital’s main campus in Stony Brook. Ms. Vichinsky was discharged a day and a half later. Isabelle is still in the newborn intensive care unit, where, Mr. Vichinsky said by phone yesterday, she is doing well and receiving excellent care.

“She’s eating more every day, and her temperature is starting to regulate. She’s a fighter,” he said. “It’s been a little bit of a rollercoaster getting here, but she’s great. We’re tremendously grateful and blessed that it happened the way it did. It was stressful, but we’re all looking forward to getting her home right now.”

Officer Peterson said she has no formal medical training, but 19 years ago, as a police cadet, she watched a video about childbirth as part of routine training. When the call came from the dispatcher, she happened to be nearby the Vichinskys’ house already, having just helped a woman who had fallen and broken an arm.

When she arrived, Ms. Vichinsky was on all fours, timing her contractions with her cellphone as her husband gathered necessities to take to the hospital. “She was just in agony, in excruciating pain. She was rocking and the contractions were getting closer and closer,” Officer Peterson recalled. “She looked at me and said, ‘I feel like I have to push.’ I undressed her and we got her as comfortable as we could, being that she was on their front porch. Her labor progressed. Looking back, it felt like it took forever, but really it was very fast — only a few minutes.”

When he dialed 911, a remarkably calm Mr. Vichinsky first requested a police escort to the hospital, as he’d heard that traffic was terrible. His wife’s heavy breathing can be heard in an audio recording of the call as Brittany Lloyd, an East Hampton Village public safety dispatcher, asked him questions.

“We’re sending an ambulance, so the ambulance will take her.”

“Just to confirm, is she breathing?”

“Just to confirm, is there any serious bleeding?”

“Not serious bleeding, no.”

“Is she at high risk or are there any complications?”

“This isn’t delaying the response,” Ms. Lloyd said. “The police officers will probably get there first and just assess her and see what’s going on.”

“She just needs to go to the hospital. She already talked to the doctor,” Mr. Vichinsky said.

“The ambulance and police are coming. I’m going to stay on the line with you until they’re right there with her, okay?”

“Let me know if anything changes. If the contractions get closer together, let me know. Don’t prevent anything. . . . Let her assume the most comfortable position for her and take deep breaths during the contractions.”

“Take deep breaths, baby,” Mr. Vichinsky can be heard saying. “I’m on the phone right now, the ambulance is on the way. . . . Do you have a toothbrush?”

“Keep reassuring your wife that help is on the way,” Ms. Lloyd urged.

A crew from the East Hampton Village Ambulance Association, including that agency’s paid paramedic, was out on another emergency run, so a second village ambulance was dispatched to the scene. A call for mutual aid was made to Amagansett, requesting the response of its on-duty paramedic. Village E.M.T.s responded directly to the scene as well, on their own.

“Everything sort of happened the right way. Unusual, but the ball landed where it should,” Mr. Vichinsky said.

“At every turn, it could have been bad. It went well, that’s the way I look at it, even though it was an extremely traumatic experience,” he said. “I really am thankful, tremendously thankful, for the officers, particularly Grace Peterson. She was really incredible. I feel like if she wasn’t there, who knows.”

Officer Peterson handed the credit right back to the Vichinskys. “Cody was my right-hand man. He really helped me. He was really wide-eyed and nervous, of course . . . and Lauren was an absolute rock star. We were somewhat of a well-oiled machine.”

She has been thinking about Isabelle every day. “I do feel really lucky that I was able to assist them in such a special moment,” she said. “To see her take her first breath is something I’ll remember for my whole, entire life.”

Mashashimuet Park's History and Future
A Conference for Young People to Create Solutions
Get Outside, Get Moving
END_OF_DOCUMENT_TOKEN_TO_BE_REPLACED