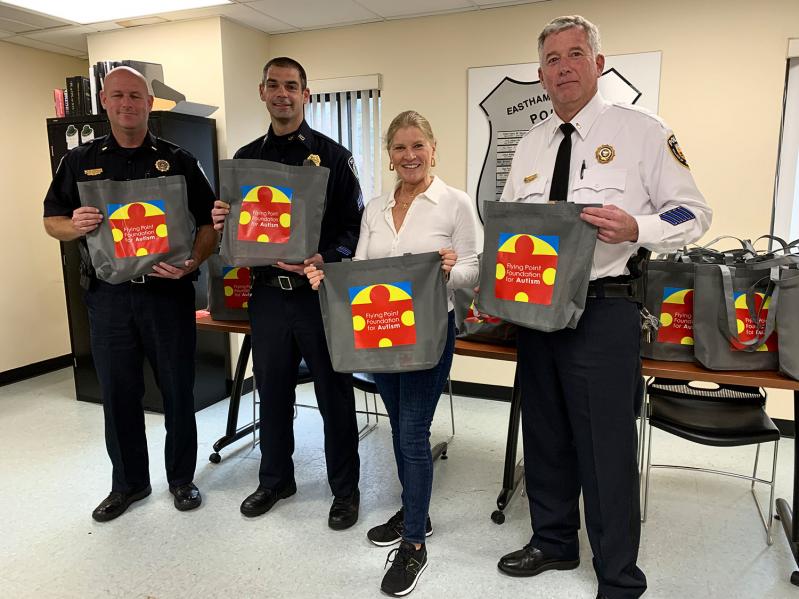 On a recent afternoon, police officers from Sag Harbor and East Hampton Villages and the Town of East Hampton gathered at town headquarters in Wainscott to collect “GoBags,” designed to assist officers who may encounter special-needs children or adults.

The GoBags are the brainchild of Kim Covell, founder of the Flying Point Foundation for Autism in Southampton, which aims to educate and inform the public about people who fall along the autism spectrum.

Ms. Covell, the parent of an autistic adult, told reporters that while she hopes police never have to utilize the GoBags, they’re a valuable add-on should an officer encounter an autistic person in crisis or engaged in some sort of criminality. “I have always been aware that any minor emergency involving my son could go off the rails in a heartbeat,” she said.

The bags contain such items as whiteboards and markers, to assist in communication with nonverbal people; headphones, “to block an overload of noise,” sunglasses, and fidget toys, which can allay anxiety and serve as an effective distraction device. There’s also a card that provides information on how to interact with people who have autism, along with stickers that parents can put in their cars or homes telling the unaware that a special-needs person is present.

The “autism spectrum” is by now a well-known catchphrase, but there’s also a spectrum of sensitivity in policing when it comes to officers’ interactions with vulnerable persons. Their needs have of late been caught up in the political and media-fueled debate over defunding the police, which as a practical local matter may mean redeploying resources to social workers and others trained to deal with autistic or other special-needs persons.

In the absence of effective cross-agency cooperation between law enforcement and human-services agencies, police find themselves all too often in the role of social workers.

At one end of that spectrum of sensitivity in policing are humane and small-p progressive police agencies such as the East Hampton Village Police Department, which has adopted a raft of best-practice protocols to address the needs of the various communities it serves.

Parents, of course, have a big role to play in ensuring that their special-needs children are protected from excessive police force because of a lack of understanding  — but so do citizens who encounter what they think is a “suspicious person,” but who may in fact be a person with autism.

Almost every week, crime reports from Sag Harbor, East Hampton Village, and the Town of East Hampton contain calls to police about “suspicious persons,” who turn out, when officers show up, to be anything but.

When it comes to those calls, East Hampton Village Police Chief Michael Tracey said it’s up to dispatchers to get the information correct, with no embellishment or assumptions. Then it’s up to the judgement of the responding officers to determine their approach.

“Our guys have gotten good at dialing it back while maintaining a safe, correct posture,” said Chief Tracey. “Our emphasis is on de-escalation, so it is enormously important that we hire people with good communications skills. A safe posture is important, but having a clear picture of what you’re walking into and what you’re not walking into is key, and why it’s so important that dispatch is accurate.”

Ms. Covell suggested at the recent GoBag giveaway that East Hampton may want to consider adopting a registry of special-needs children in the area to give police one more important tool.

“We deal with a wide variety of people,” said Sgt. Kenneth Alversa of the town police, during the GoBag event.

Some families are actively engaged in protecting their special-needs children from unnecessary encounters with police. “We’ve had families reach out to let us know they’ve moved to our jurisdiction,” said Sergeant Alversa.

Special-needs children’s encounters with police can, and have, gone horribly awry elsewhere. In 2020, CNN reported that an autistic 13-year-old boy was shot by police in Salt Lake City after his mother called to request a crisis intervention team to assist with her son, who was having behavioral issues. Instead, the boy was Tasered and then shot.

Closer to home and at the very far and ugly end of the sensitivity spectrum, it’s hard to look away from the recent case in Center Moriches where a former N.Y.P.D. officer, Michael Valva, left his 8-year-old autistic son in a freezing garage overnight as punishment for his behavior. The boy died of exposure. Mr. Valva was convicted last week of second-degree murder and sentenced to life in prison.

That case is clearly an outlier, but it raises a larger issue about training. East Ham­pton officers do receive crisis intervention training at the county police academy, but when it comes to training that’s specific to persons on the autism spectrum, Chief Tracey said that “there is not a lot of police training in that particular area given by the police agencies, the academy, or in-service, and we could certainly use more of it.”

The chief praised his department’s work with and presence in the local schools — he’s a former and longtime East Hampton School Board member — noting that the agency often relies on its partners in the schools, in social services, and in other agencies “who deal with a broader group of ‘customers,’ so to speak, than we do. There’s no absolute formula for dealing with anyone with regard to their age or if they are on the spectrum, but we are not shy about calling for help or guidance.”

That said, Chief Tracey also emphasized community engagement as a key to maintaining a de-escalatory posture whenever possible.

“We have to have a lot of connections in that area, because if you call us, we are coming,” he said.

Mr. Tracey has championed a change in current state law that would allow local law enforcement, rather than strictly adhering to civil service lists, to have a say in who gets hired to the police force — much as school officials and boards are now making the decision when it comes to hiring teachers.

“There should be a way that we can broaden our hiring,” so that it’s more reflective and sensitive to the particulars of this community, he said.

“I’m not saying turn hiring over to the community — but the schools did it years ago.”

Chief Tracey also highlighted his department’s ongoing cooperation with the town’s anti-bias task force and the Family Services League of Suffolk County, which he said has helped keep a number of mentally challenged people from being sent to psychiatric units following a police encounter. Such disruptions can be especially damaging to autistic persons, for whom routine is a key factor in their well-being.

That best-practice approach involves officers calling in partners in the mental-health community who can assist in “making an informed assessment of their state of mind and can give you advice as to whether a person needs to be driven to a medical facility or doesn’t,” Chief Tracey said.

This training, he added, “is actually helping us reduce the number of people who get transferred to Stony Brook or another psychiatric unit.” He particularly pointed out the benefit to someone who is “saved from that ride because they maybe didn’t see their doctor, didn’t fill a prescription.”

But, he said, there is always more that can be done for East Hampton’s special-needs citizens. “We don’t have enough of that on Long Island — and we have even less of it on the East End.”