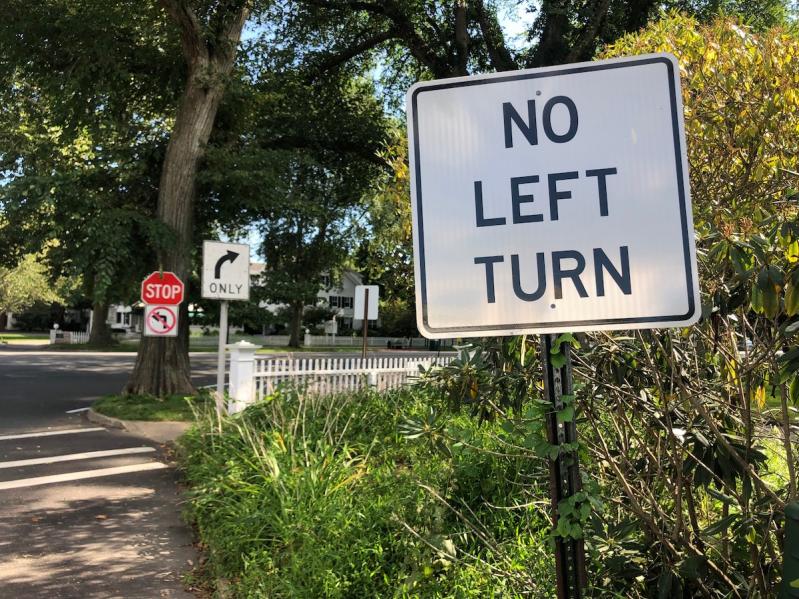 Amid a season of intense traffic on town and village roads, at least six accidents last week involved the bane of local drivers' existence: left-hand turns.

East Hampton Town Police Detective Sgt. Daniel Toia urged drivers this week to exercise caution, plan their routes ahead of time, and use their turn signals properly. "Yield to the right of way, and pay attention to what you're doing," he said. "You're supposed to turn the signal on 100 feet ahead of your destination. If you notice you're going to miss your turn, go to the next intersection and execute a safer turn."

A three-car accident Friday morning on Route 114 resulted in injuries to two drivers and a passenger. Annette Shaw of Sag Harbor and New York City, driving a 2021 Audi, told police she did not see the 2004 Jeep in front of her, driven by Matthew Classens of East Hampton, waiting to make a left onto South Breeze Drive. Ms. Shaw rear-ended the Jeep, pushing it into oncoming traffic, where it collided with a 2021 Chevrolet driven by Linda Weed of East Hampton. Ms. Shaw, 74, and Ms. Weed, 70, complained of chest pain and head pain, respectively, while Mr. Classens's passenger, Amanda Mattingly, 27, suffered a bleeding head wound. All three were taken by ambulance to Stony Brook Southampton Hospital. Mr. Classens, 32, was not injured.

Two drivers making left turns collided on Sept. 1 just after noon at the intersection of Route 114 and Cove Hollow Road. According to a police report, Daniel Meehan of Montauk, driving a 2016 Dodge pickup, was at the Cove Hollow Road stop sign when, thinking the road was clear, he struck a 2014 Lexus driven by Lorraine Hansen of Amagansett. No one was injured; the total damage was estimated to be less than $1,000.

Shortly after noon on Aug. 31, Richard Dec of Montauk was headed east on Pantigo Road near Pantigo Place when, he told police, a driver making a left smashed into his 2016 Audi. That driver, John Mannix of New York City, told police he thought he had enough time to turn, which was not to be the case.

Two more accidents involved left-hand turns on Friday, a minor one in the afternoon at the intersection of Montauk Highway and Oak Lane Extension in East Hampton and one at night at the corner of Springs-Fireplace Road and Washington Avenue in Springs. No injuries were reported, but in the latter incident, police said, the driver said to have caused the accident made a U-turn and fled the scene.

In East Hampton Village, a general problem area is the intersection of Main Street, Buell Lane, Dunemere Lane, and James Lane. On Aug. 17, employees of this newspaper reported two accidents there within the span of an hour and a half. No one was injured. Last week, there was one more, also without injuries.

"Right now, the state is looking at the Route 114 intersection specifically, counting accidents and that kind of thing," said Village Police Chief Michael Tracey. "They're looking at a traffic study and will come back with recommendations -- what can be done to make it safe? That's an ongoing thing right now to see if they can reduce accidents and line-of-sight issues. . . . As you know, making a left there is almost impossible."

There are also regular violations of no-left-turn signs in certain places, Chief Tracey said — the Main Street exit from the Reutershan parking lot, for instance. Another issue is the intersection of Main Street and Huntting Avenue, where a crosswalk complicates things.

"That road is four lanes," said the chief. "It is the only Main Street in any village on eastern Long Island where there are four lanes going through your business district . . . People need to make sure they're not exceeding the speed limit and are watching for people crossing."

And, he added, being careful when making left-hand turns and even right-hand turns.

Also in East Hampton Town, three people were injured in a three-car accident on Montauk Highway near Hampton Lane on Aug. 16. Marc Roura of Topeka, Kan., told police he'd swerved into oncoming traffic to avoid hitting an animal in the road. An accident report released this week indicates that Mr. Roura sideswiped a dump truck, which was full of gravel, registered to Bistrian Materials and driven by Stephen K. Lynch of East Hampton. The dump truck overturned. Mr. Roura then struck head-on a car driven by Stephen Miro of Patchogue, 33.

Adrianne Croce, 24, who was a passenger in Mr. Miro's car, was airlifted to Stony Brook University Hospital with severe facial injuries and shock. Mr. Lynch, 39, and Mr. Roura, 22, were transported to Stony Brook Southampton with head bruising and complaints of severe pain, respectively. Mr. Roura received four traffic tickets and is to appear in Justice Court on Oct. 21.

Dmitrii Pasiakin of Astoria, 34, was injured on the afternoon of Aug. 31 while attempting to cross Montauk Highway near South Emery Street in Montauk on his motorized scooter. He was struck by Ashley Miles of Calverton, 34, who told police she was unable to avoid a collision after Mr. Pasiakin suddenly pulled out into the road. He was treated at Stony Brook Southampton Hospital for an elbow injury.