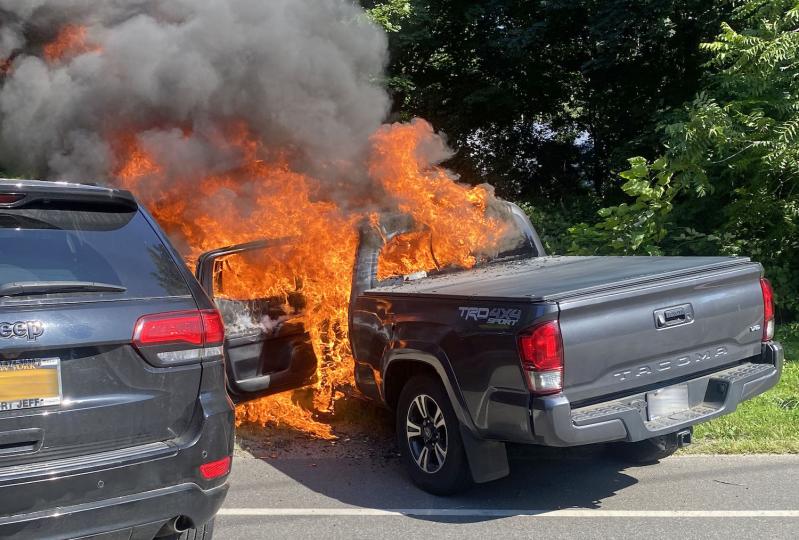 After a pickup truck and an S.U.V. collided on Accabonac Road and Town Lane Friday afternoon, East Hampton first responders arrived to find the pickup on fire and flames spreading to the S.U.V.
Gerard Turza Jr.
By Bella Lewis

Four recent accidents on local roads ended in charges of driving while intoxicated against all four motorists, according to East Hampton Town police.

Mark Yadgaroff of Manhattan, 56, was charged on the evening of July 20 after his 2014 Mercedes-Benz hit an embankment and then a tree on Phoebe Scoy's Path at the intersection of Mile Hill Road in Northwest. Police said he performed poorly on roadside sobriety tests, and held him for a morning arraignment before Town Justice Steven Tekulsky in East Hampton Justice Court.

At around 4 p.m. on Friday, Sara Lucas of Springs, 27, driving a 2018 Jeep, ignored a "do not enter" sign at the intersection of Town Lane and Accabonac Road in East Hampton and collided head-on with a 2017 Toyota pickup that then burst into flames, police reported. The Toyota's driver, Adan Aguero, 57, and his 13-year-old son, Victoreddy Aguero-Castillo, were taken to Stony Brook Southampton Hospital by East Hampton ambulance after complaining of chest pain. Fireplace Auto Collision towed both cars and Ms. Lucas, who allegedly failed the field sobriety test, was held overnight for arraignment on Saturday morning.

On Sunday at 3 a.m. in Montauk, Dennis Ractun of East Hampton rear-ended a 2011 Volkswagen taxi driven by Ryan Keller, 34, of Montauk, but did not stop his 2005 Honda Civic and continued down Montauk Highway near South Embassy Street, according to town police. Mr. Keller followed Mr. Ractun, 22, to Maple Lane in East Hampton, where police caught up to them. Mr. Ractun appeared in Justice Court on Monday.

George Rubalcava of Montauk, 38, was accused of aggravated unlicensed driving as well as D.W.I. early Sunday morning following an accident in that hamlet. Police said that in failing to manage a sharp turn from Industrial Road onto Second House Road he had run over the "Sharp Turn" sign. He tried to continue on, they said, but was stopped as he turned his 2004 Ford pickup onto the highway. Mr. Rubalcava appeared in Justice Court later in the morning before Justice Lisa R. Rana.