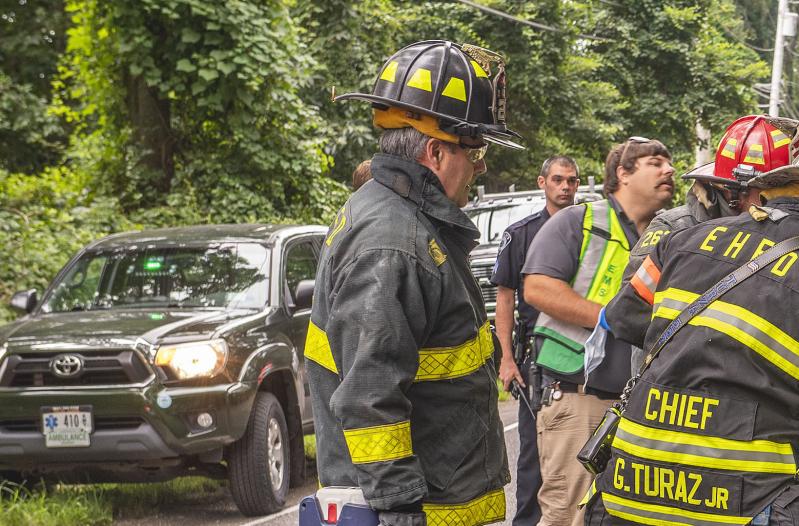 The green light in the windshield of the pickup on the left at an Aug. 4 accident in East Hampton indicates that the driver is an ambulance volunteer.
Michael Heller
By Bella Lewis

Too many cars are not reacting to silent blue or green flashing lights in fire and ambulance volunteers' vehicles the same way they would to a siren, said East Hampton Fire Department Chief Gerard Turza, and this summer is worse than ever, because, he suggested, the pandemic has attracted more people unfamiliar with how local emergency services operate.

"It's always been a problem," said the chief. They need to pull over.

LTV's "Blue Light Green Light Move to the Right" campaign from years ago was put back into circulation on Aug. 5. In the video, Chief Turza and Sergeant Matt Morgan of the East Hampton Village Police urge residents to do their part to help responders get to the firehouse, ambulance barn, or scene of an accident; namely, to keep checking their rearview mirrors. They may spot an ordinary-looking car flashing a green light (for ambulance volunteers) or a blue one (for fire department volunteers). Those are the people who staff most of the emergency medical services available on the East End.

Because of drivers' disregarding these signals, Chief Turza said, victims are not getting the help they need as quickly as possible, and the responders, who donate their time, are not being treated with respect. He pointed to "a general atmosphere where people are oblivious to what's really going on around them." Chief Michael Sarlo of the town police agreed that this indifference is hindering important work.

"The traffic volume seems as bad as we have ever seen it," he said, "and accidents are trending up from last year." He added, however, that they are "basically on pace with most previous years' totals to date."

East Hampton Village Police Chief Michael Tracey also cited "impatience and inconsideration in general" on the roads, though he agreed with Chief Turza that failure to yield has always been an issue. Chief Sarlo went further, saying that "pandemic lockdowns" have created "a tension in the air -- and when this trickles over to the roadways, it makes for some dangerous conditions."

"It is certainly a significant challenge, and we urge everyone to use defensive driving, slow down, stay off their phones, and accept the volume of traffic and adjust their commute times accordingly," he added.

On top of all this, the town police force is "stretched very thin," the chief said. "With the county not running an academy class for all of 2020, we fell behind with hiring. We currently have officers in the academy, but our staffing levels are short. We are on pace for an all-time high in calls for service, with fewer officers on the road."

"I would say, along with the increase in traffic, there has been an increase in careless driving," Chief Tracey said in an email. "And in the village, careless pedestrians. Many step into traffic without looking and instead are looking at their phones. Our Main Street is crowded and is the only village in eastern Long Island that has a four-lane section of roadway passing through a high pedestrian-traffic area. It can be hazardous. Even with crosswalks, pedestrians often cannot be seen by all lanes and should look both ways when crossing."

Chief Turza recalled a recent accident where both vehicles caught fire. People who were not pulling over for responders could not have known this, but every flashing light must be understood as urgent. "Getting to that scene was difficult," he said, "and the traffic hinders my headquarters and we become gridlocked on Cedar Street."

Chief Sarlo had the final word. "It's been quite a difficult summer," he said.